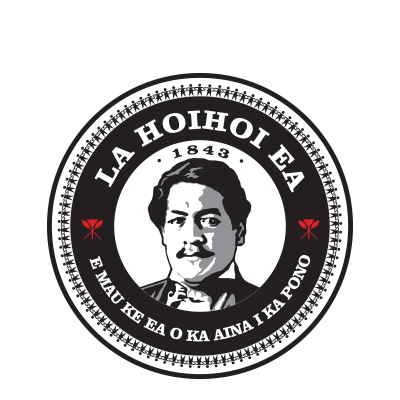 THE THEFT OF A NATION

HONOLULU: JUNE 29, 2017 — Americans celebrate American Independence Day on the Fourth of July every year, commemorating the Declaration of Independence and the birth of the United States of America as an independent nation in 1776. To mark an event from Hawai’i’s history, La Hoʻihoʻi Ea <http://lahoihoiea.org/history/> will observe this Fourth of July with a dramatic re-enactment of events that occurred over a century ago at ‘Iolani Palace.

Beginning at 10:00 am July 4, 2017, on the front steps of ʻIolani Palace, La Hoʻihoʻi Ea will present a dramatic re-enactment of the events that led to proclaiming into existence of the Republic of Hawaii and the subsequent installation of Sanford B. Dole as President of the Territory of Hawaii. “With Bible in hand, pistols in their pockets and American Naval troops at the ready, men gathered on the steps of ʻIolani Palace on July 4th, 1894. Invoking the name of American liberty, they dismantled the liberty of the people of the Hawaiian Kingdom.”

This exciting re-enactment is free and open to the public. The script, a work in progress, has been prepared using input from several noted Hawai`i scholars and historians including writer/producer Tom Coffman <http://hawaiibookandmusicfestival.com/tom-coffman/>, Poka Laenui of Moʻoaupuni <https://mooaupuni.org/> and Dr. Lynette Cruz of La Ho`iho`i Ea. The “work in progress” event is being staged by MarshaRose Joyner. The four have worked together since 1989 under the banner of Sacred Times and Sacred Places.

On January 16, 1893, United States diplomatic and military personnel conspired with a small group of individuals to overthrow the constitutional government of the Hawaiian Kingdom and prepared to provide for annexation of the Hawaiian Islands to the United States of America under a treaty of annexation submitted to the United States Senate on February 15, 1893. Newly elected U.S. President Grover Cleveland, having received notice that the cause of the so-called revolution derived from illegal intervention by U.S. diplomatic and military personnel withdrew the treaty of annexation and appointed James H. Blount, as Special Commissioner, to investigate the terms of the so-called revolution and to report his findings.

Instead, the United States allowed five years to elapse.  A new United States President, William McKinley, entered into negotiations for a second treaty of annexation on June 16, 1897, with the same individuals who participated in the illegal overthrow in 1893, but the treaty failed to be ratified by the United States Senate due to protests submitted by Her Majesty Queen Lili‘uokalani and signature petitions opposing annexation signed by 21,169 Hawaiian nationals.

Two separate camps divided Hawaiʻi’s political environment.  One, a small minority, held the power of government through the landing of the U.S. military.  The second, Hawaiian loyalists, supported their Hawaiian Queen Liliuokalani and their country.

The first camp wanted annexation of Hawaiʻi to the U.S., part of a larger plan to open their sugar exports to U.S. markets.  They sided with American expansionists like John L. Stevens, U.S. Minister to Hawaiʻi. Hawaiian subjects, according to U.S. special investigator James Blount, were almost to the man in opposition to annexation.

U.S. troops landed on January 16, 1893 and supported a self-proclaimed “provisional government” the next day.  A hurriedly drafted annexation treaty was sent to the U.S. Senate in February for ratification under Harrison’s administration, but that treaty failed.  Grover Cleveland, inaugurated President in March, sent Blount to investigate the Hawaiian affair.  Having received Blount’s report, Cleveland railed against U.S. conspiracy and withdrew the treaty in December.

Sanford Dole, President of the “provisional” government, was criticized for the lack of legitimacy.  He convened a convention of 37 delegates, 19 appointed by him, the remainder elected by those who disavowed loyalty to Queen Liliʻuokalani and who swore allegiance to the provisional government.

Using as their backdrop the U.S. Independence day celebration, Dole’s group assembled at ʻIolani Palace at 8:00 A.M., July 4, 1894.  With guns tucked out of public sight, William O. Smith, one of the early conspirators of the group, acted as master of ceremony.  Dispensing with the opening prayer, apparently skittish over the proceedings taking place, Smith introduced Dole.  Dole, looking down upon their members, proclaimed “the Republic of Hawaiʻi as the sovereign authority over and throughout the Hawaiian Islands.”  He went on, “And I declare the Constitution framed and adopted by the Constitutional Convention of 1894 to be the constitution and the supreme law of the Republic of Hawaiʻi, and by virtue of this constitution I now assume the office and authority of president thereof.”

The constitution declared all Liliʻuokalani’s government’s lands, waters and citizens as those of the Republic.

While framing their activities around the American principle that the right of governance can only be achieved through the consent of the governed, the Republic of Hawaiʻi was declared in just the opposite manner.  No ratification or consent was given the Republic by Hawaiians.

At a party in Honolulu at the U.S. Legation to celebrate July 4th that evening, Kahuku Plantation founder, J.B. Castle, proclaimed, “Americans assemble here today amidst novel and serious events to make a new declaration of independence and of principles, broader and wiser than the declaration of 1776; to make the solemn declaration that the intelligent minority in every community has the inalienable right to good government, which they are justified in securing, holding themselves responsible only to God and their own consciences for the just and proper use of power in their hands.”

Castle continued: “The inexorable law of evolution withdraws the native from his long dominance, and forces the American and his allies to the front, with a demand for a new declaration of principles. . . . the Anglo Saxon and his allies, with the best thought of civilization behind them, and trained in the best use of political machinery . . . may demonstrate to the world that they can hold the supreme power, at first, for the good of all, and gradually educate, and lead the men of other races up to their own standards of good government, and finally and safely, distribute that power among all races. . .” “We solemnly declare, with the experience of a hundred years behind us, that minorities in number have the inalienable right to good government, and they are commissioned to secure and maintain it, holding themselves responsible to God and their own consciences, for the just and proper use of the power organized and used to obtain it.” Source: Pacific Commercial Advertiser, July 5, 1894, Honolulu, Hawai`i. 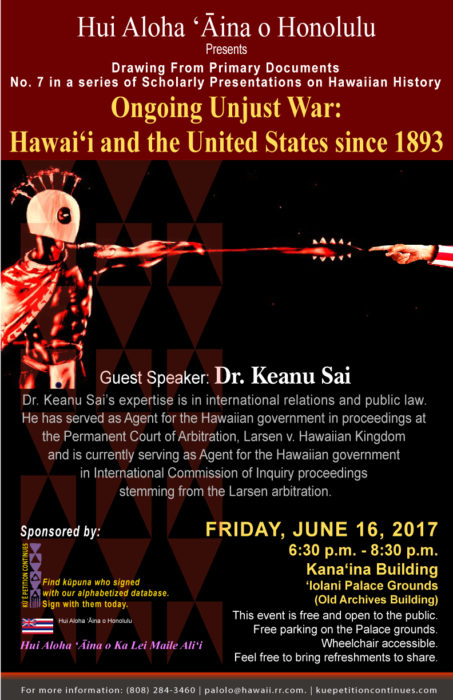