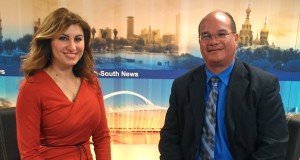 On October 19, 2012, after a meeting with H.E. Peter Thomson, Fiji’s Permanent Representative and Ambassador to the United Nations in New York, Hawaiian Ambassador-at-large, H.E. David Keanu Sai, Ph.D., was called to an interview with the United Nations South-South News regarding Hawai‘i’s prolonged and illegal occupation by the United States.

South-South News is an initiative launched in February 2010 during the sixteenth session of the United Nation General Assembly High-level Committee on South-South Cooperation (SSC). The purpose for South-South News is to advance the implementation of the Millennium Development Goals (MDGs) through the sharing of best practices in the areas of South-South and Triangular Cooperation. South-South News disseminates news about Africa, Asia and the Pacific, Middle East, Eastern Europe, Latin America, and the Caribbean. South-South News is a digital media platform for the countries of the South that is facilitating, connecting, and publishing news on various efforts in sustainable economic and social development to audiences and multiple constituencies not only in the South but also around the world.