Dr. Lynette Cruz and Dr. Keanu Sai discuss his doctoral research on the occupation of Hawai‘i and how to ultimately bring the occupation to an end. Also discussed was Dr. Sai’s recent letter to Assistant Secretary of Insular Affairs at the Department of the Interior, Esther Kia‘aina, regarding evidence that Hawai‘i’s sovereignty was lost in 1893.

Dr. Keanu Sai, political scientist, made a formal request today to Assistant Secretary for Insular Affairs at the Dept. of Interior, Esther Kia‘aina, to provide evidence that the United States extinguished Hawai‘i’s sovereignty under international law. In his email to Kia‘aina that included the formal letter, Dr. Sai stated:

Please find attached a formal request for the U.S. Department of Interior to provide evidence that Hawai‘i’s sovereignty was extinguished under international law from the Department of Justice’s Office of Legal Counsel. According to Title 28 U.S.C. §510, the Office of Legal Counsel has been delegated by the Attorney General the responsibility for preparing formal opinions to the various Executive branch agencies, which includes the Department of Interior. Dr. Kamana‘opono Crabbe, CEO of the Office of Hawaiian Affairs attempted to do this with the Secretary of State, but it was “politically” derailed.

Now with the recent Department of Interior hearings, the continuity of the Hawaiian Kingdom as a sovereign State was clearly displayed by the testimony of individuals, both professional and private, that have been formally and informally educated on the matter. If the United States Federal government can show clear and undeniable evidence to not only Hawai‘i’s people, but to the entire world, that its has extinguished the Hawaiian Kingdom as provided for by international law, then the prospect of federal recognition can move forward without a any problems, except for maybe U.S. law such as Rice v. Cayetano. But if it cannot, then we will deal with 121 years of violating Hawai‘i’s sovereignty and the international laws of occupation and the issues will now be restitution and reparations and the movement toward de-occupation.

This is a very serious matter with profound legal, political and economic ramifications for not only the residents of the Hawaiian Islands, which includes resident aliens, but also for the international community at large whereby countries and their nationals have been affected as well, especially when these countries continue to have treaties with Hawai‘i.

The Honolulu Civil Beat has published Dr. Sai’s letter as an “open letter.”

[Correction: The letter was resent to Assistant Secretary of Insular Affairs, Esther Kia‘aina with the corrected date. The original letter was mistakenly dated August 5, 2013 when it should have been August 5, 2014.] 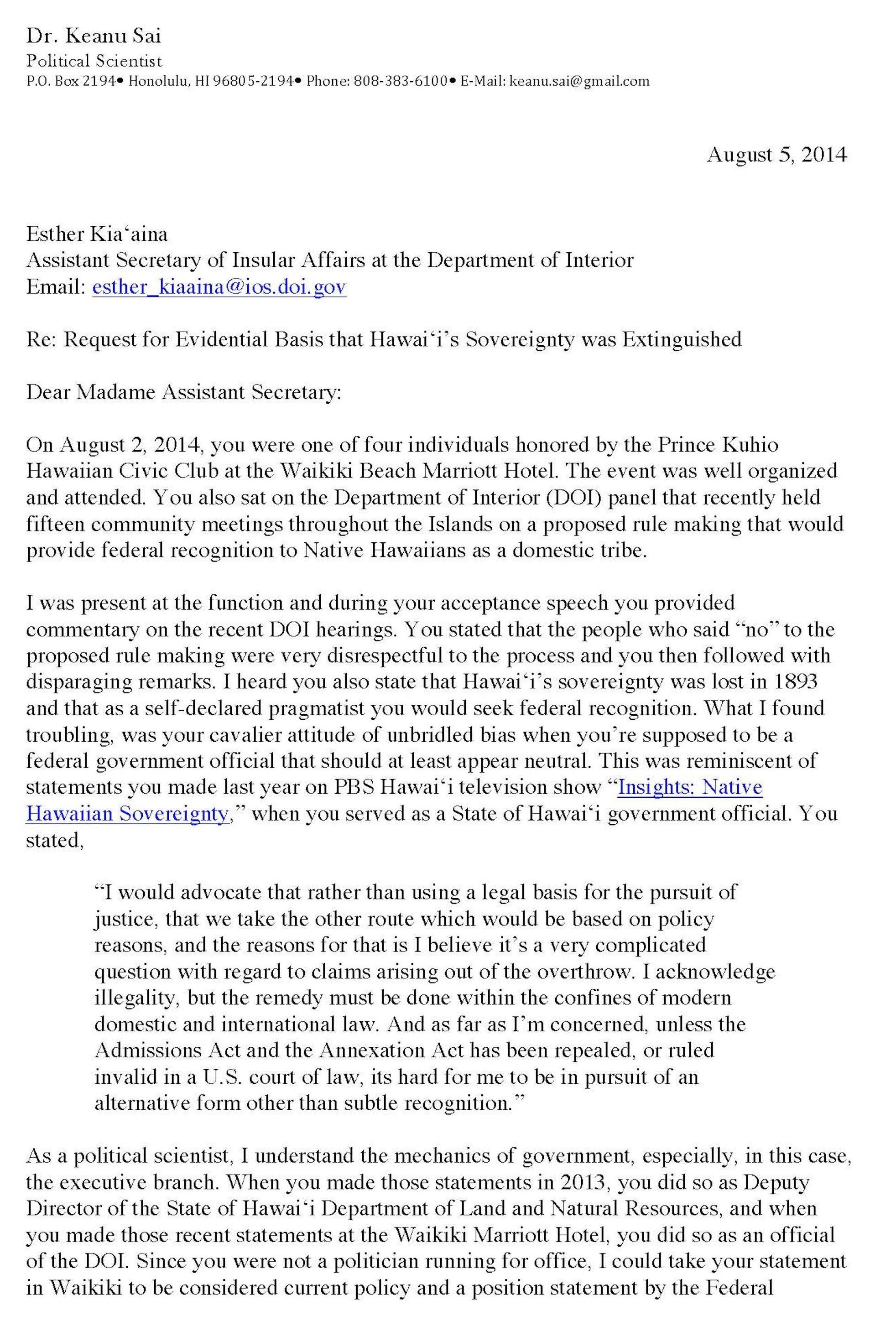 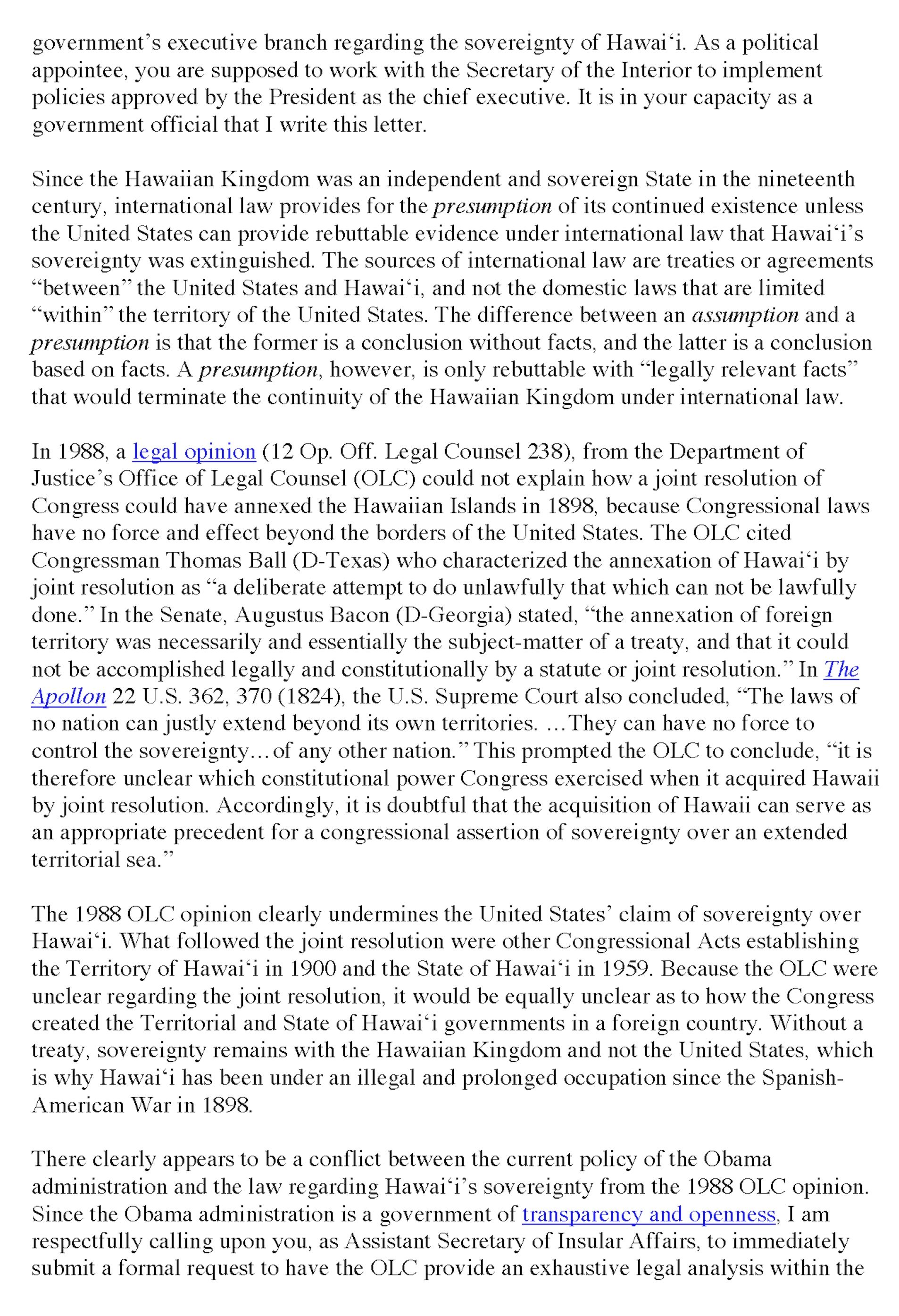 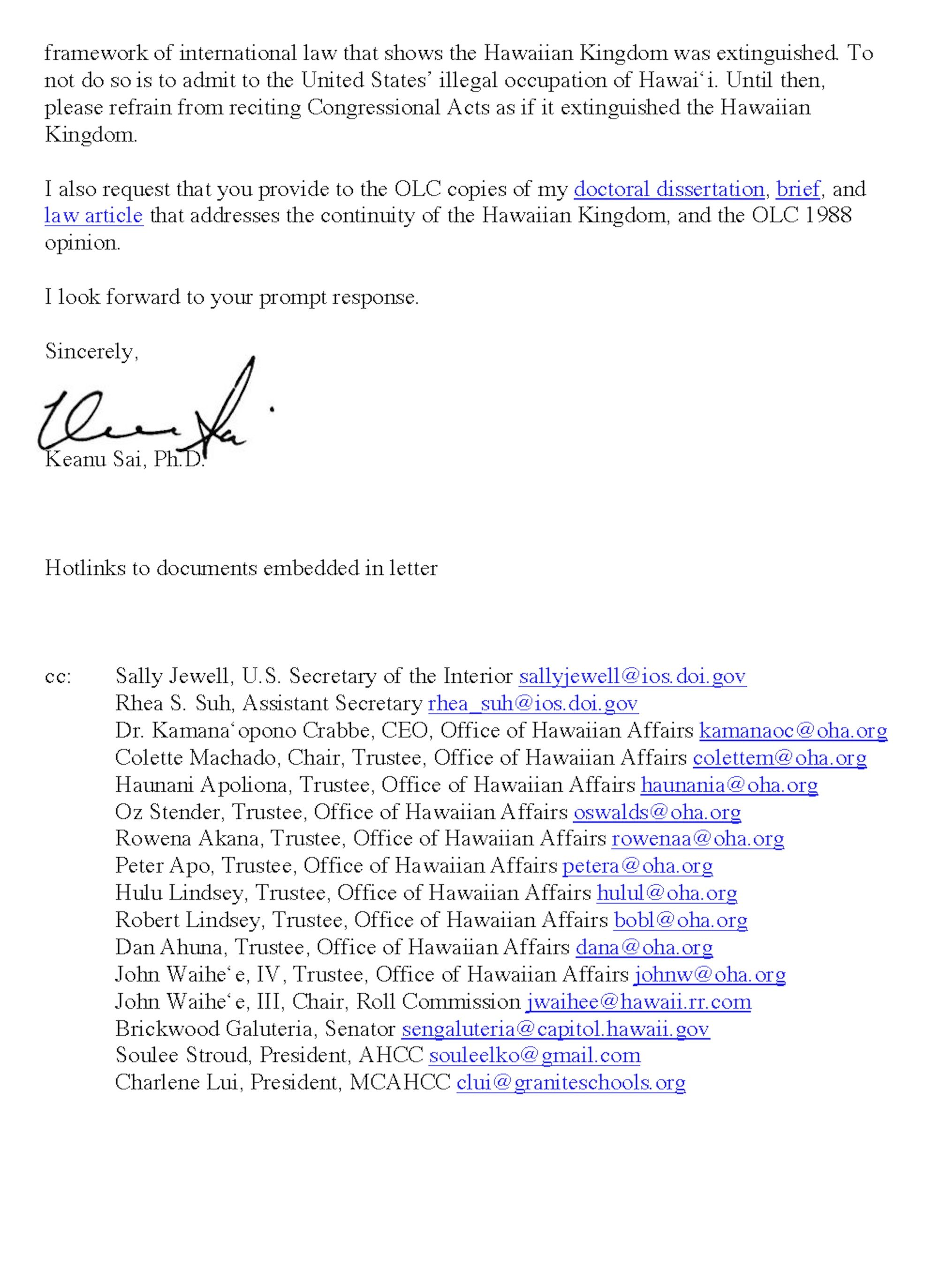 Here are the hotlinks that are embedded in the letter.