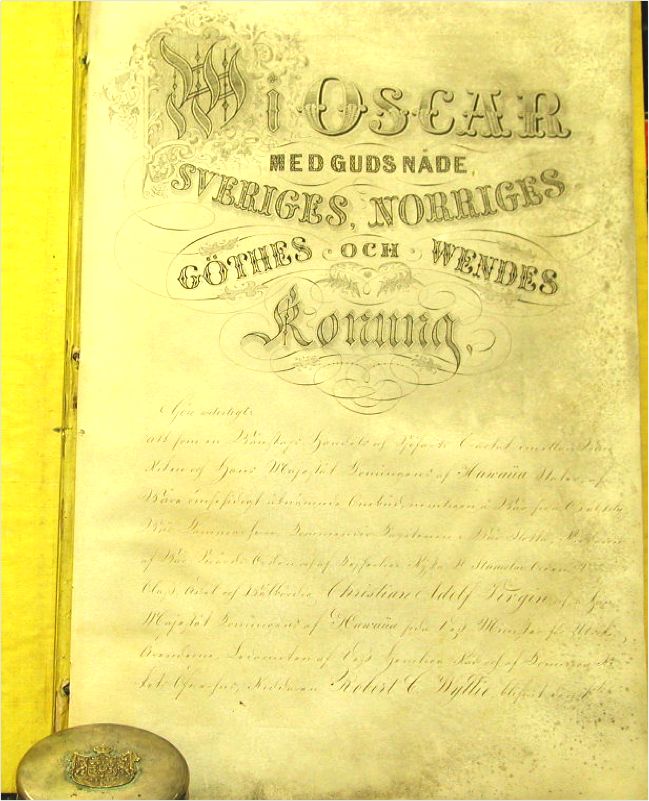 On July 1, 1852, a Treaty was signed between Sweden and Norway and the Hawaiian Kingdom in Honolulu and thereafter ratified by both governments. Article II of the treaty provides:

“there shall be between all the dominions of His Swedish and Norwegian Majesty, and the Hawaiian Islands, a reciprocal freedom of commerce.  The subjects of each of the two contracting parties, respectively, shall have liberty freely and securely to come with their ships and cargoes to all places, ports and rivers in the territories of the other, where trade with other nations in permitted.  They may remain and reside in any part of the said territories, respectively, and hire and occupy houses and warehouses and my trade, by wholesale or retail, in all kinds of produce, manufactures or merchandise of lawful commerce, enjoying the same exemptions and privileges as native subjects, and subject always to the same laws and established customs as native subjects.”

Following the separation of Austria-Hungary into two separate States, both States remained parties to the 1852 Treaty with the Hawaiian Kingdom. Neither Norway nor Sweden nor the Hawaiian Kingdom gave notice to the other of their intentions to terminate this treaty in accordance with the terms of Article XVII of the 1852 Treaty.  Therefore, the treaty is still in full force and continues to have legal effect to date.

1 thought on “Sweden and Norway—1852 Treaty of Friendship, Commerce and Navigation”