The government of the Hawaiian Kingdom is a constitutional and limited monarchy comprised of three Estates: the Monarch, Nobles and the People. An Estate is defined as a “political class.” All three political classes work in concert and provides for the legal basis of the government and its authority. Article 45 of the 1864 Hawaiian constitution, provides: “The Legislative power of the Three Estates of this Kingdom is vested in the King, and the Legislative Assembly; which Assembly shall consist of the Nobles appointed by the King, and of the Representatives of the People, sitting together.”

This provision is further elaborated under §768, Hawaiian Civil Code (Compiled Laws, 1884), “The Legislative Department of this Kingdom is composed of the King, the House of Nobles, and the House of Representatives, each of whom has a negative on the other, and in whom is vested full power to make all manner of wholesome laws, as they shall judge for the welfare of the nation, and for the necessary support and defense of good government, provided the same is not repugnant or contrary to the Constitution.” As each Estate has a negative on each other, no law can be passed without all three Estates agreeing.

According to Hawaiian law “No person shall ever sit upon the Throne, who has been convicted of any infamous crime, or who is insane, or an idiot (Article 25, 1864 Constitution),” which, by extension, extends to the Nobles whereby “The King appoints the members of the House of Nobles, who hold their seats during life, unless in case of resignation, subject, however, to punishment for disorderly behavior. The number of members of the House of Nobles shall not exceed thirty (§771, Compiled Laws).”

Representatives of the People shall be Hawaiian subjects or denizens “who shall have arrived at the full age of twenty-five years, who shall know how to read and write; who shall understand accounts, and who shall have resided in the Kingdom for at least one year immediately preceding his election; provided always, that no person who is insane, or an idiot, or who shall at any time have been convicted of theft, bribery, perjury, forgery, embezzlement, polygamy, or other high crime or misdemeanor, shall ever hold seat as Representative of the people (§778, Compiled Laws).”

The Estate of the Crown

proclaim as such, during the King’s life; but should there be no such appointment and proclamation, then the successor shall be chosen by the House of Nobles and the House of Representatives in joint ballot.” Kamehameha III proclaimed his adopted son, Alexander Liholiho, to be his heir apparent after receiving confirmation from the Nobles in 1853. Alexander ascended to the Throne upon the death of King Kamehameha III on December 15, 1854.

King Kamehameha V ascended to the Throne through the process of appointment by the Premier (Kuhina Nui) Victoria Kamamalu, and confirmation by the Nobles in 1863, because Kamehameha IV had no surviving children. His son and heir, Prince Albert Kamehameha, died at the age of four

on August 27, 1862. Since the young Prince’s death, Kamehameha IV did not appoint a successor before he died on November 30, 1863.  According to the 1852 Constitution, Article 47 provided, “Whenever the throne shall become vacant by reason of the King’s death…the Kuhina Nui, for the time being, shall…perform all the duties incumbent on the King, and shall have and exercise all the powers, which by this Constitution are vested in the King.”

Since Kamehameha V had no children, Article 22 of the 1864 Constitution provides that a “successor shall be the person whom the Sovereign shall appoint with the consent of the Nobles, and publicly proclaim as such during the King’s life; but should there be no such appointment and proclamation, and the Throne should become vacant, then the Cabinet Council, immediately after the occurring of such vacancy, shall cause a meeting of the Legislative Assembly, who shall elect by ballot some native Ali‘i of the Kingdom as Successor to the Throne.” The Cabinet Council replaced the function of the Premier (Kuhina Nui) under the former constitution, whose office was repealed by the 1864 Constitution, and according to Article 33 would serve as a Council of Regency.

On December 11, 1872, Kamehameha V died without children and he did not appoint a successor. Kamehameha V’s Cabinet, as a Council of Regency, convened the Legislative Assembly in special session on January 8, 1873. A regent is a person or persons who serve in the absence of a monarch. In their speech to the Legislature, the Council stated:

“His late Majesty did not appoint any successor in the mode set forth in the Constitution, with the consent of the Nobles or make Proclamation thereof during his life. There having been no such appointment or Proclamation, the Throne became vacant, and the Cabinet Council immediately thereupon considered the form of the Constitution in such case made and provided, and Ordered—That a meeting of the Legislative Assembly be caused to be holden at the Court House in Honolulu, on Wednesday which will be the eighth day of January, A.D. 1873, at 12 o’clock noon; and of this order all Members of the Legislative Assembly will take notice and govern themselves accordingly. By virtue of this Order you have been assembled, to elect by ballot, some native Ali‘i of this Kingdom as Successor to the Throne. Your present authority is limited to this duty, but the newly elected Sovereign may require your services after his accession.”

On that day the Legislature elected Lunalilo as King. From December 11, 1872 to January 8, 1873, the Kingdom was headed by a Council of Regency. Article 33 of the 1864 Constitution provides that “the Cabinet Council at the time of such decease shall be a Council of Regency…who shall administer the Government in the name of the King, and exercise all the Powers which are Constitutionally vested in the King.”

The Legislative Assembly convened again in special session on February 12, 1874 and elected King Kalakaua after Lunalilo, who died without children, failed to appoint a successor. Upon ascension to the Throne, King Kalakaua appointed his brother Prince William Pitt Leleiohoku as his heir apparent and received confirmation from the Nobles. Leleiohoku died April 10, 1877, which prompted

Queen Lili‘uokalani appointed Princess Ka‘iulani as her heir apparent in 1891, but was unable to get confirmation by the Nobles because they were prevented from entering the Legislative Assembly as a result of the so-called 1887 bayonet constitution that began the insurgency. In 1917, Queen Lili‘uokalani died with no such appointment or Proclamation leaving the Throne vacant. After the Queen’s death, only Prince Kuhio was left of the heirs presumptive. All the rest had died. Of the heirs presumptive, only Prince David Kawananakoa died with lineal descendants, but these lineal descendants did not inherit the title of heirs presumptive because they were not proclaimed as such by a reigning Monarch, as King Kalakaua did by proclamation in 1883. While these lineal descendants have no claim to the Throne, they are part of the Estate of the Ali‘i (Chiefs).

Currently, there are pretenders to the Estate of the Crown that have claimed to be Kings, Princes or Princesses. Some claims are well known, while others are not, but all claims to the Throne have no basis in Hawaiian law because Her late Majesty Queen Lili‘uokalani did not appoint and thereafter proclaim her successor in accordance with the law as it was done in the past. The titles of Prince and Princess are not hereditary titles, but have a direct correlation to the reigning Monarch, as either being an heir apparent or heirs presumptive. In other words, an individual cannot claim to be a prince or princess without a sitting Monarch for the realm.

The Estate of Nobles (Chiefs)

The political class of Ali‘i is an integral component of the Hawaiian Kingdom and its government and has its origin deeply rooted in Polynesian society. The entire land system of the Kingdom that continues to exist today is grounded and based on actions taken by the Ali‘i such as the granting of Royal Patents, Land Commission Awards, and the Great Land Division (Mahele) between the Government and Chiefs, which also set the terms of division between both the Government and Chiefs and native tenants desiring to get a fee-simple title to their lands.

On August 9, 1880, the Hawaiian Legislature enacted “An Act to Perpetuate the Genealogy of the Chiefs of Hawaii.” 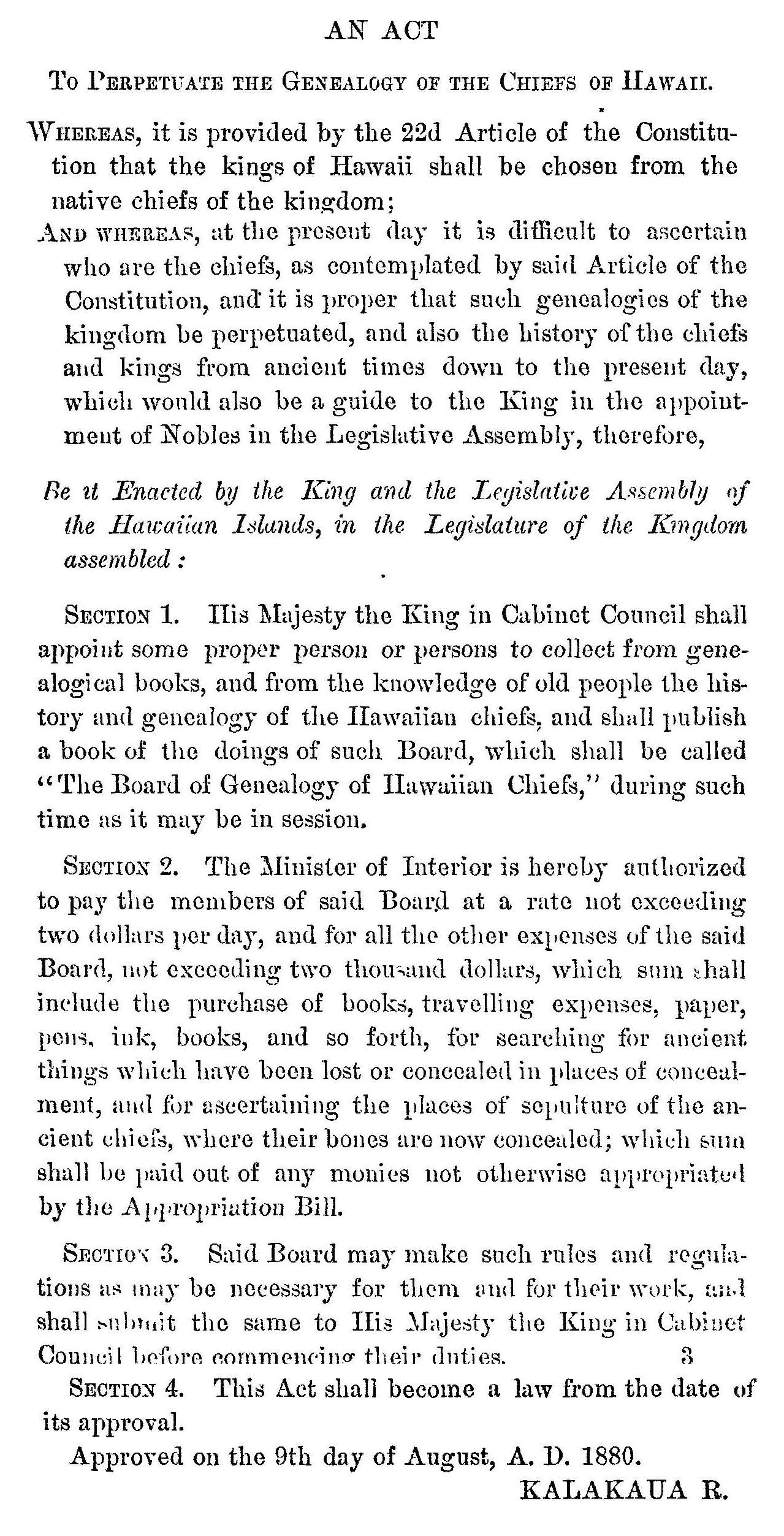 In its Report in 1884, the Board stated it was examining copies of genealogical books by Kamokuiki, Kaoo, Kaunahi, Unauna, Hakaleleponi, Piianaia, Kalaualu and David Malo, and that the “Board has not entered into revision of these books and those written by foreign historians as the time has been taken up mostly in attesting the genealogy of those that have applied to have their genealogy established.” The Board also reported, that it “has avoided entering into controversies with the genealogical discussions that have been going on for a year or more in the local Hawaiian newspapers, as these discussions have been more or less conducted in a partisan spirit instead of on scientific principles. They loose the merit of usefulness by the hostilities assumed by the contending writers.”

This so-called constitution was drafted by a select group of twenty individuals and effectively placed control of the Legislature and Cabinet in the hands of individuals who held foreign allegiances, which led to the illegal overthrow of the Hawaiian government by the United States of America. The leader of this insurgency, Lorrin Thruston, was the Minister of the Interior, and he refused to fund the Board of Genealogists

as required by law. In a letter to Her Royal Highness Princess Po‘omaikelani, President of the Genealogical Board, dated July 29, 1887, Thurston writes, “I beg to acknowledge receipt of your communication of the 27th inst. in which you state the labors of the board need not be suspended because the appropriation cannot be paid. There can, of course, be no objection to a continuation of the work of the Board of Genealogy so long as it is carried out without expense to the Government.”

Despite the lack of government funding and the illegal overthrow of the Hawaiian Kingdom government, the Board continued their work to compile the genealogies of Hawaiian Chiefs (Mo‘okua‘auhau Ali‘i) that were eventually published in the Ka Maka‘ainana newspaper in the year 1896.

The acting Government is providing these publications, which are in the Hawaiian language, to the public at large with a link to the original publication in PDF by date of the publication. The names of Hawaiian Chiefs below are printed as they are written in the published genealogies, which did not have any diacritical markers such as the ‘okina or kahako. The English translations of these publications can be drawn from Edith Kawelohea McKinzie and Ishmael W. Stagner, II, Hawaiian Genealogies, vol. 1. A basic glossary of terms that can be used to understand the published genealogies are:

June 1, 1896—Genealogies of King Kamehameha IV and King Lunalilo, both of whom died without lineal descendants.

June 8, 1896—Genealogies of King Kalakaua and Queen Liliuokalani, both of whom died without lineal descendants.

June 15, 1896—Genealogy of Princess Kaiulani, who died without lineal descendants.

October 5, 1896—Genealogies of Stella Keomailani Cockett who died without lineal descendants; and the child of Kekulu and Kaiakoili, being David Kalani.

November 2, 1896—Genealogy Hana Kaunahi and Akahi who both died without lineal descendants.

Any person today who is a direct lineal descendant of the Hawaiian Chiefs identified in these published genealogies belong to the Estate of Nobles (Chiefs), and are eligible to be appointed as Nobles in the Legislative Assembly and/or to the Throne in accordance with Hawaiian law.

The Estate of the People

Any person today who is a direct lineal descendant of a Hawaiian subject before the United States occupation began at 12 noon of August 12, 1898, belong to the Estate of the People.

75 thoughts on “The Three Estates of the Hawaiian Kingdom”