Dexter Kaiama, an attorney that represents war crime victims, was told by another attorney that Judge Harry Freitas admitted to him and the Prosecutor for Hawai‘i County in a conference call that he received a warrant from the International Criminal Court (ICC) in The Hague, Netherlands, to appear before the Court. Freitas is a District Court Judge for the Third Circuit in the city of Hilo, Island of Hawai‘i.

In February 2013, Kaiama submitted the following complaint on behalf of his client with the Prosecutor of the ICC alleging Judge Harry P. Freitas committed a war crime by willfully depriving his client of a fair and regular trial prescribed by the Fourth Geneva Convention, and that Federal National Mortgage Association, and attorneys Blue Kaanehe, Charles Prather, and Peter Keegan were complicit in these proceedings and therefore committed a war crime as accessories. 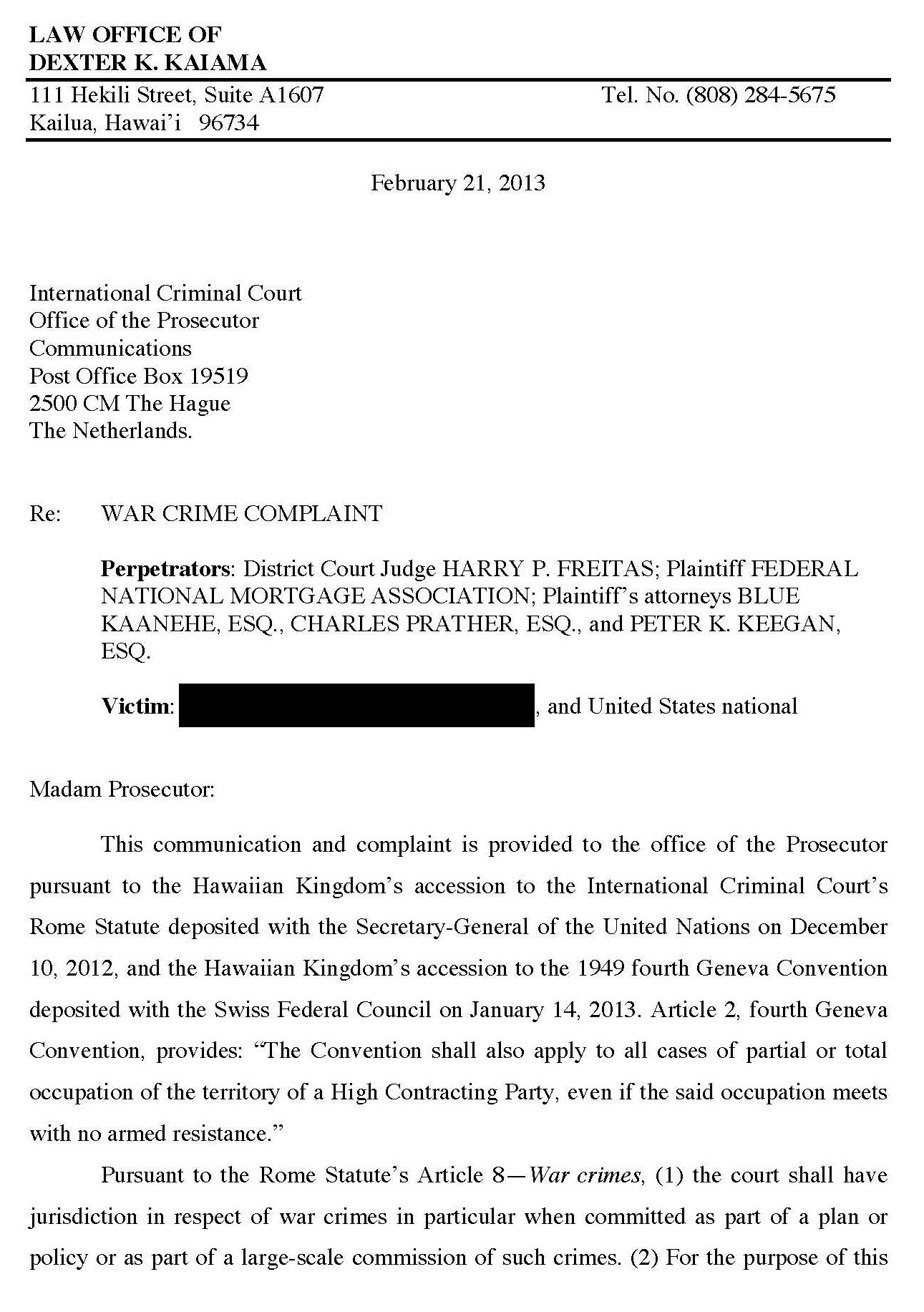 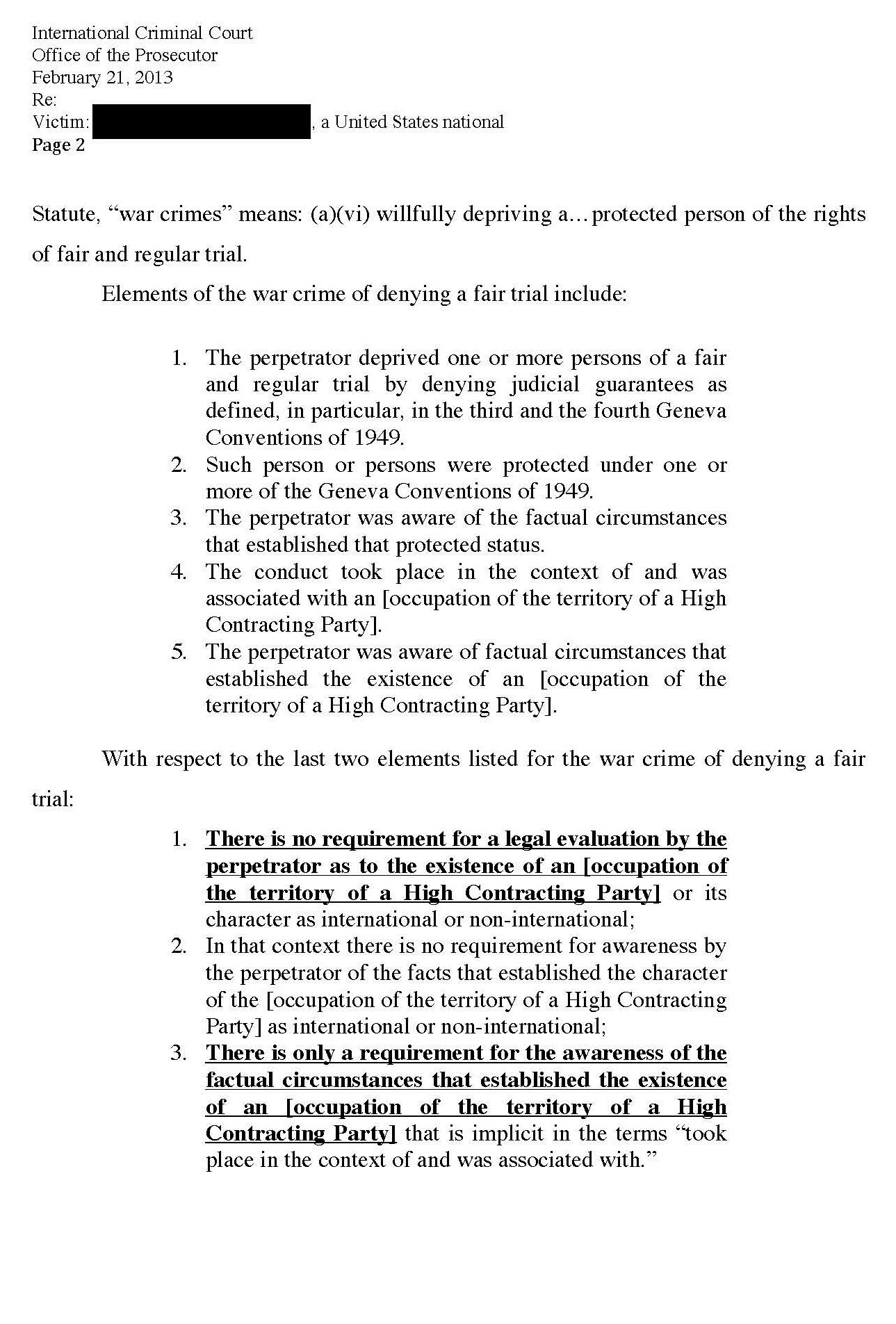 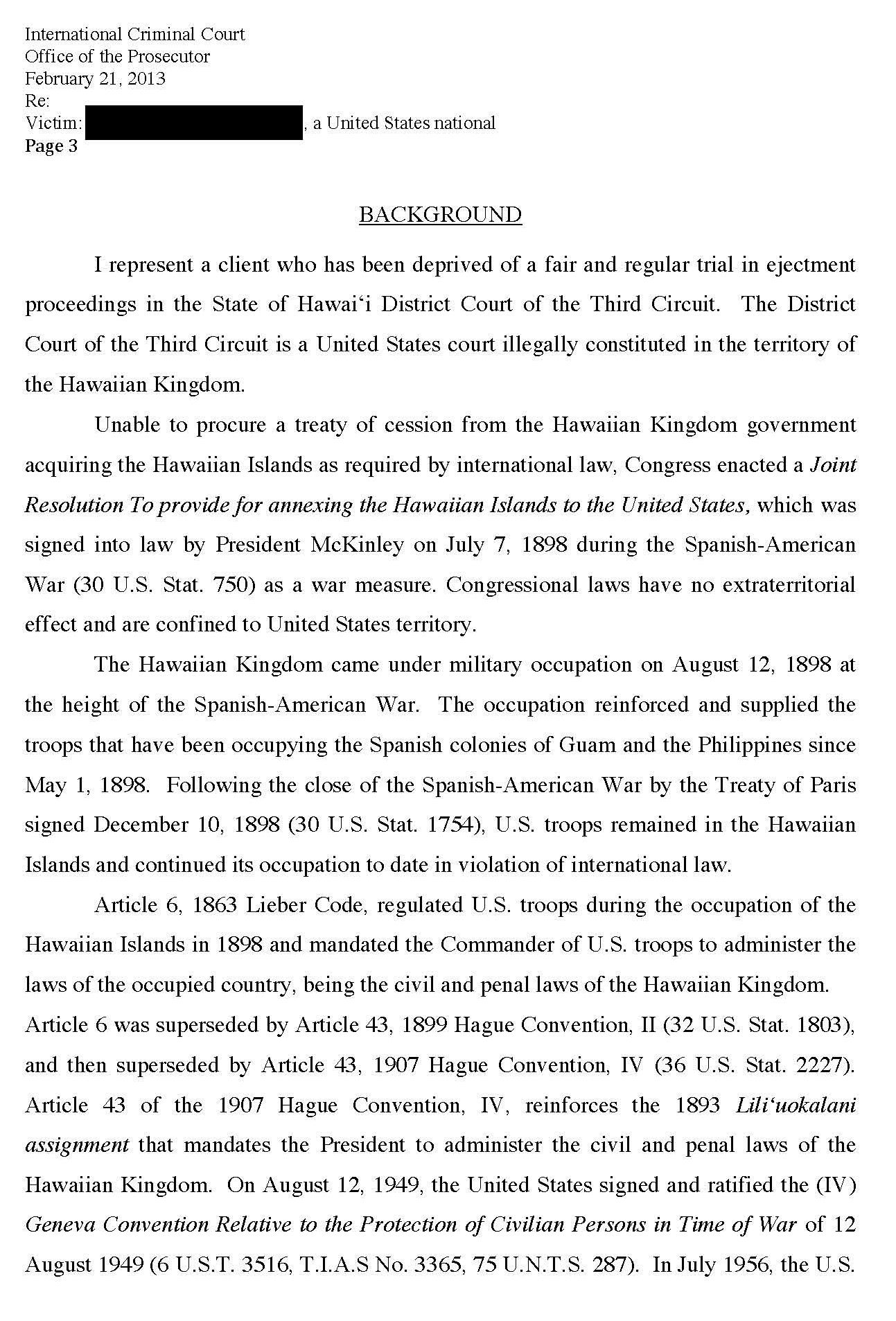 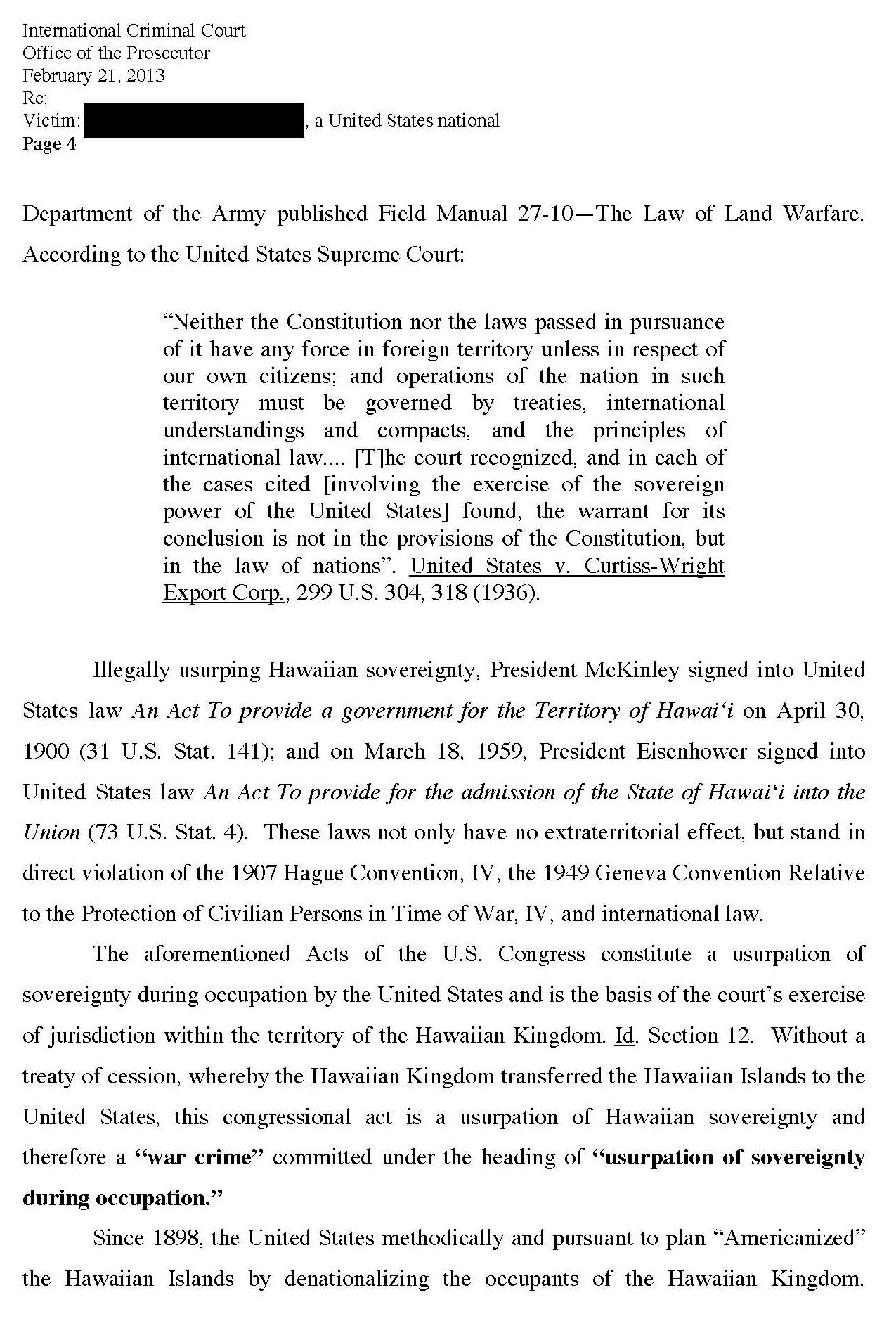 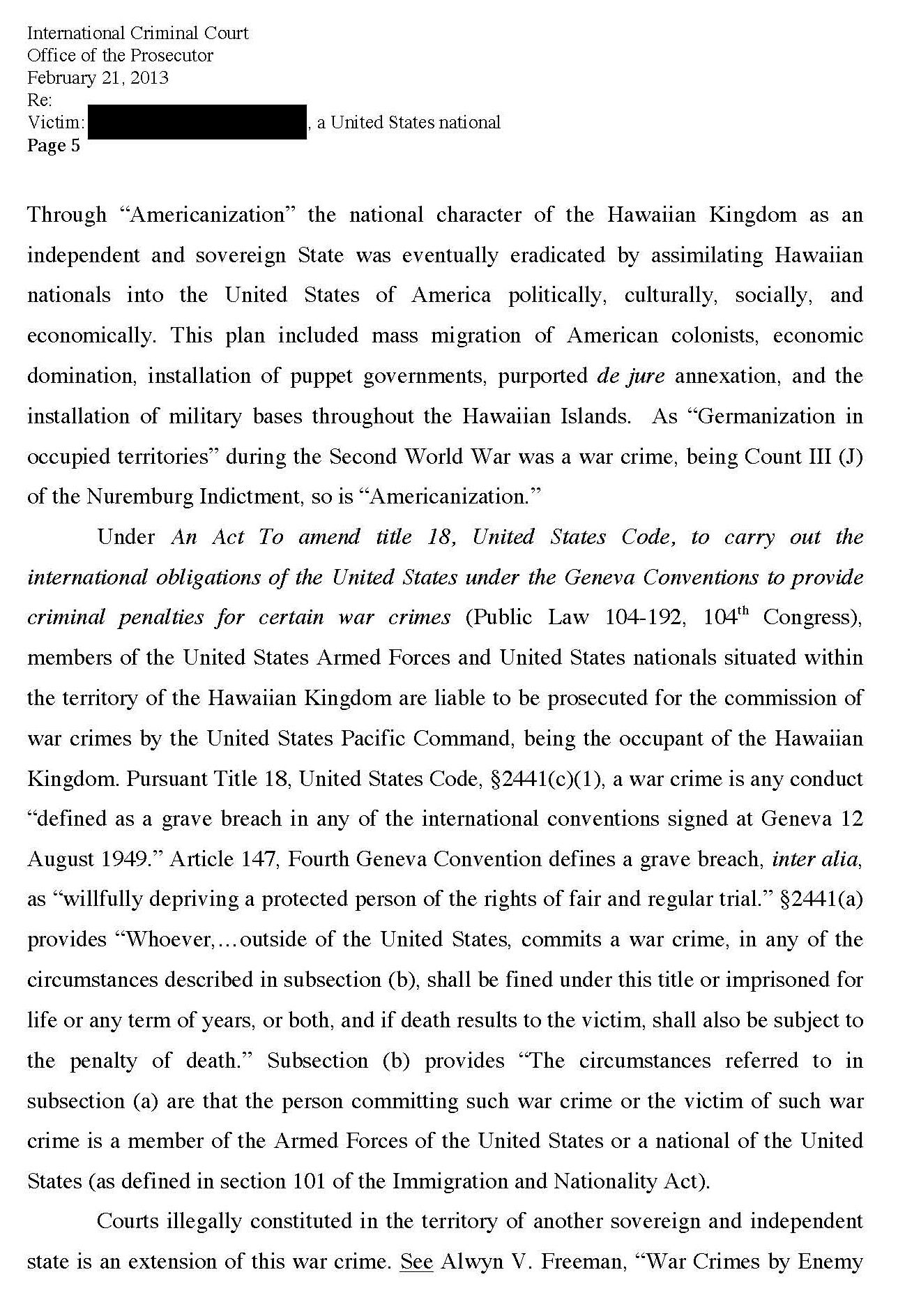 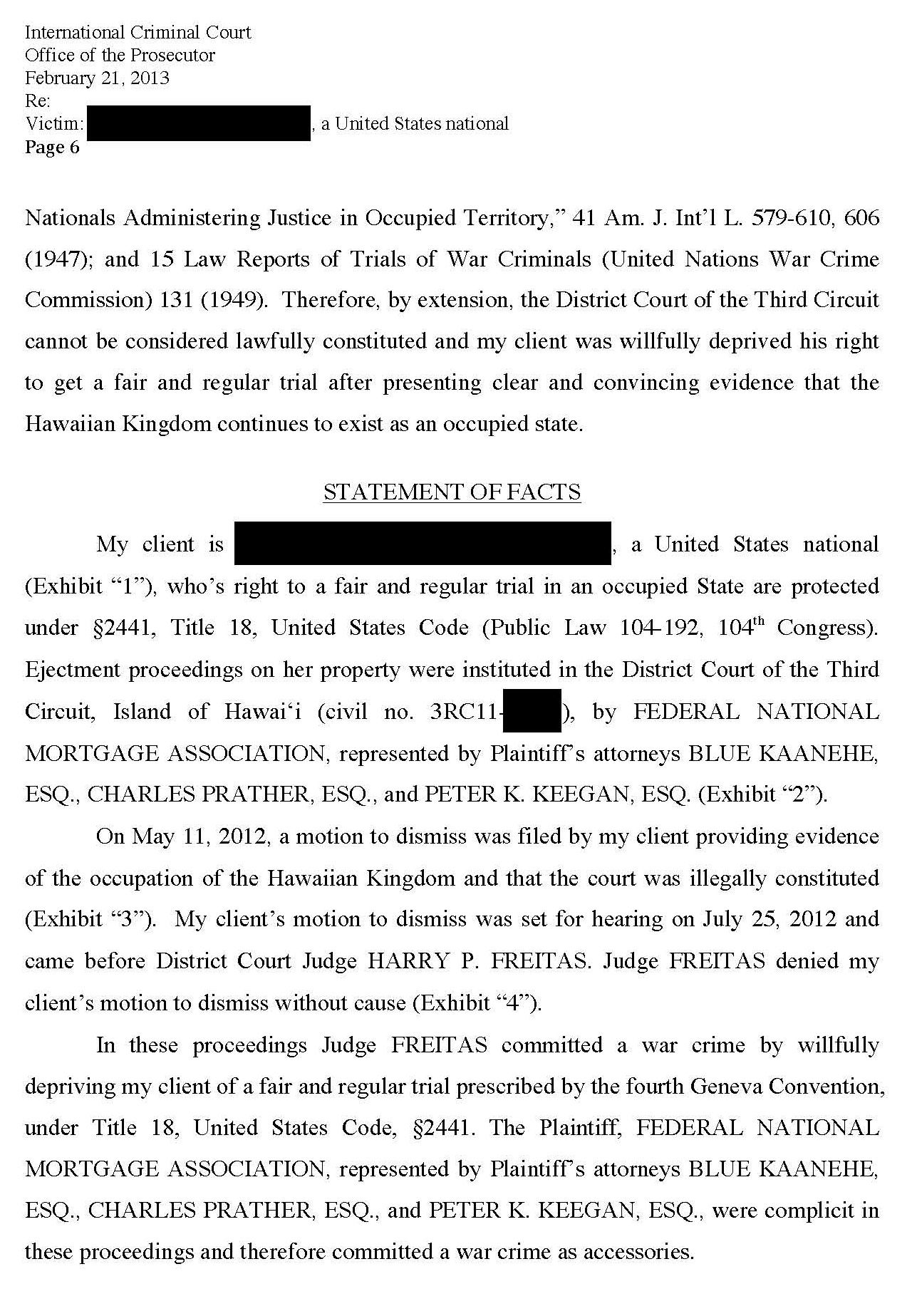 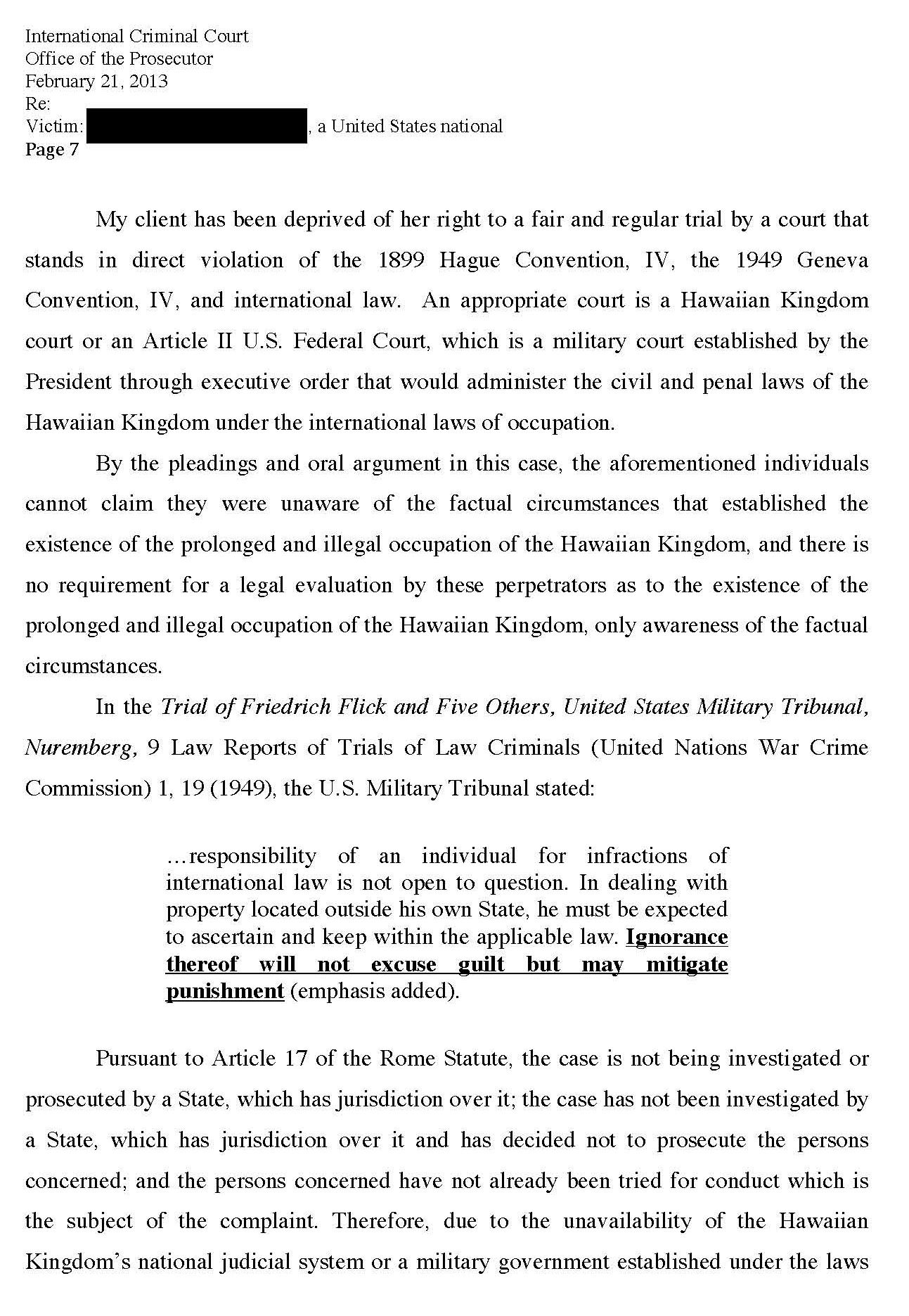 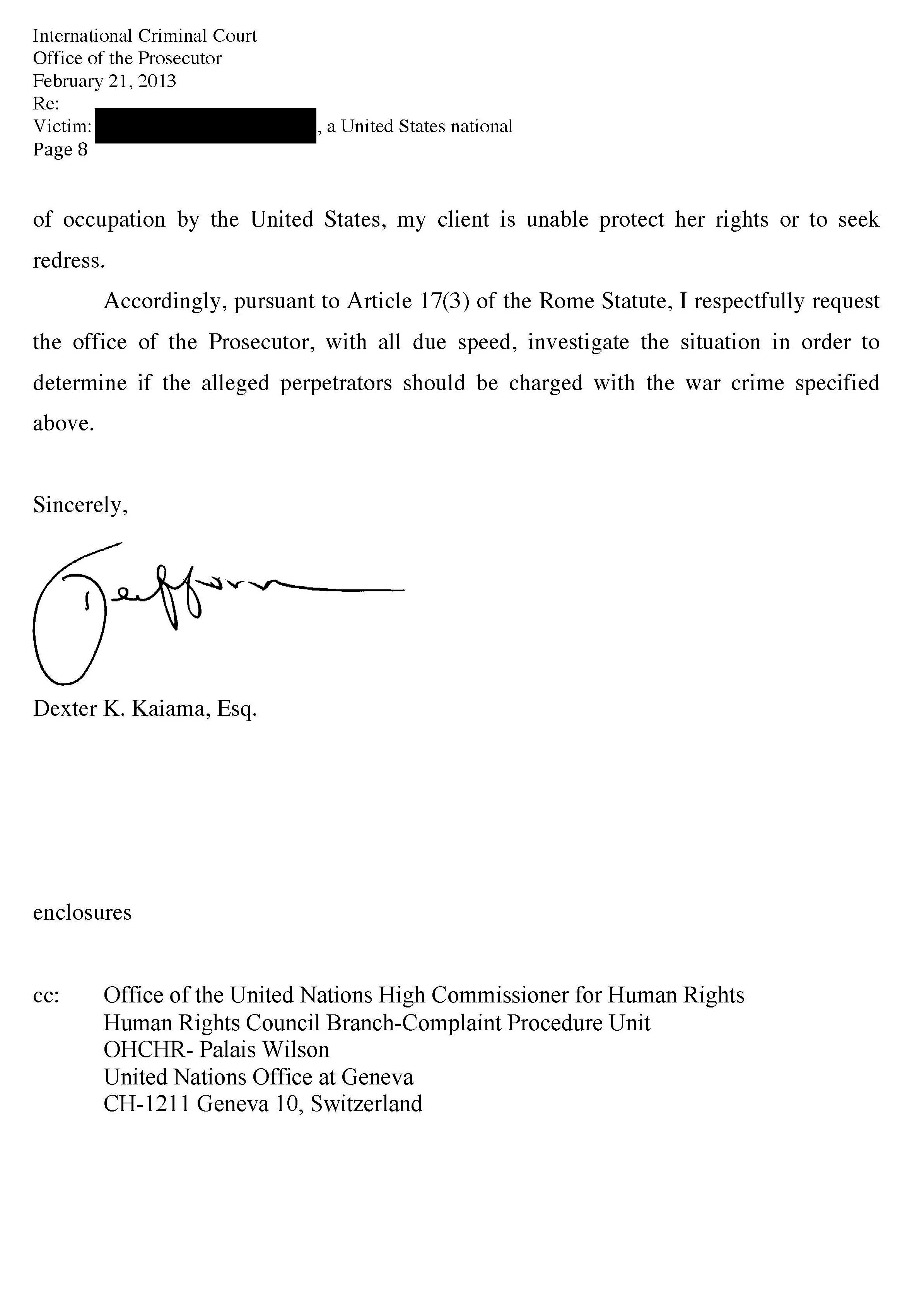 On March 4, 2013, the Office of the Prosecutor’s Information and Evidence Unit acknowledged receipt of the complaint and assigned it case no. OTP-CR-63/13. 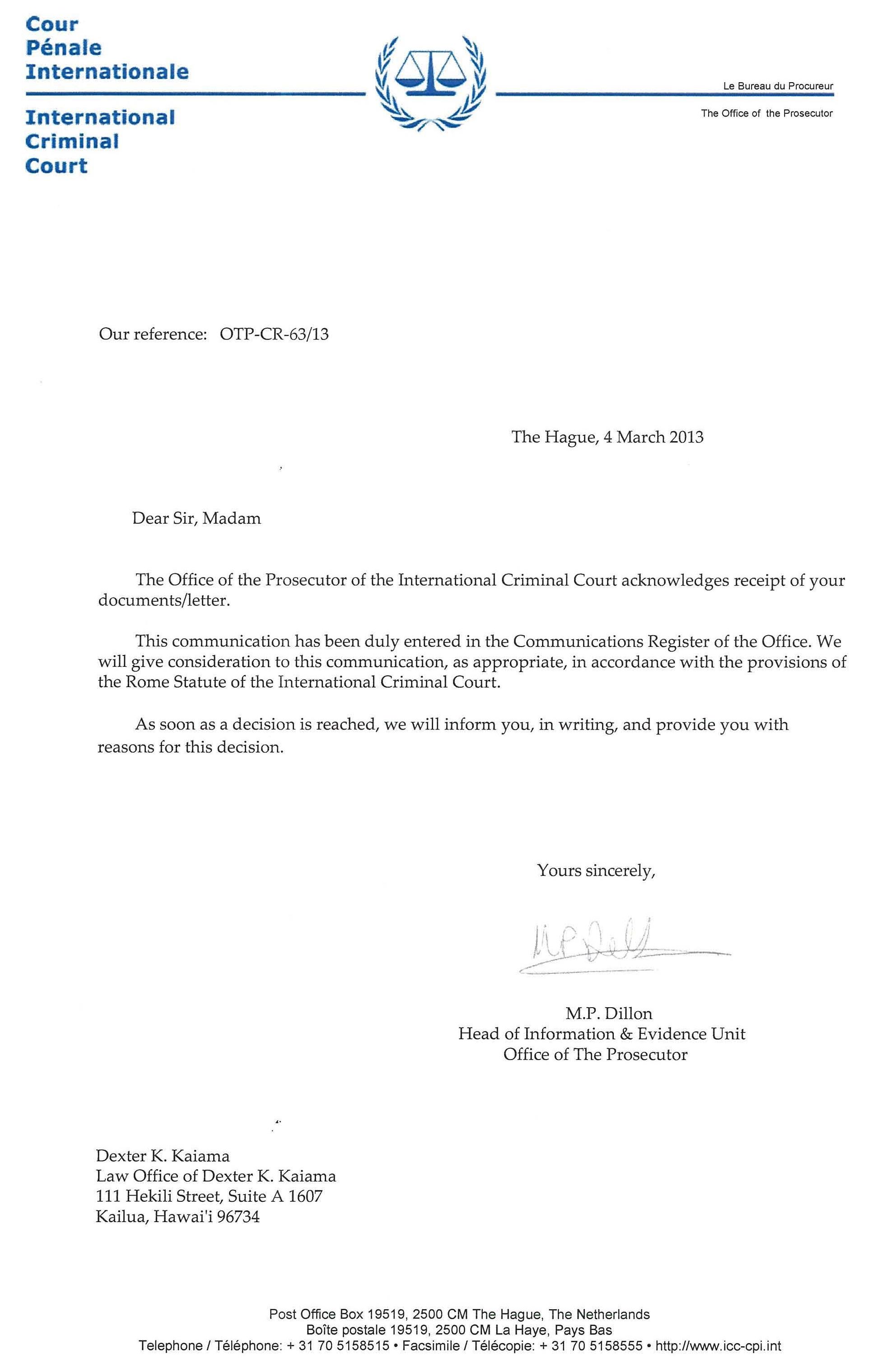 The PTC would issue a summons if there are reasonable grounds to believe that the person has committed the alleged crimes, and that the summons is sufficient to ensure appearance before the Court on a specific day and time. Both warrants and summons can be sealed by the Court, which makes them only accessible to persons authorized by the Court. And once it can be ensured that victims and witnesses can be adequately protected, the Prosecutor could apply to the Court to unseal the warrants or summons in an effort to garner international attention and support for the arrests or summons. 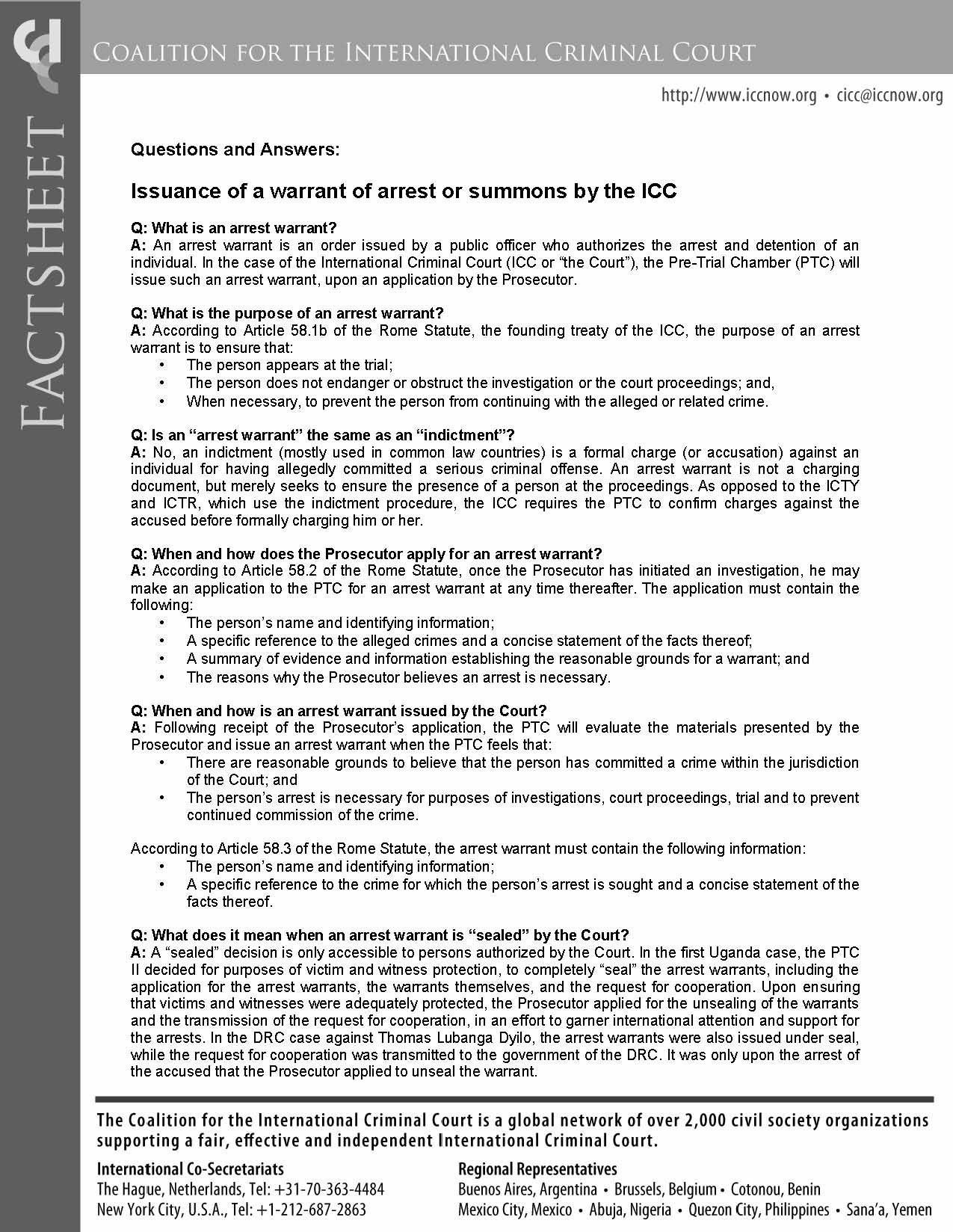 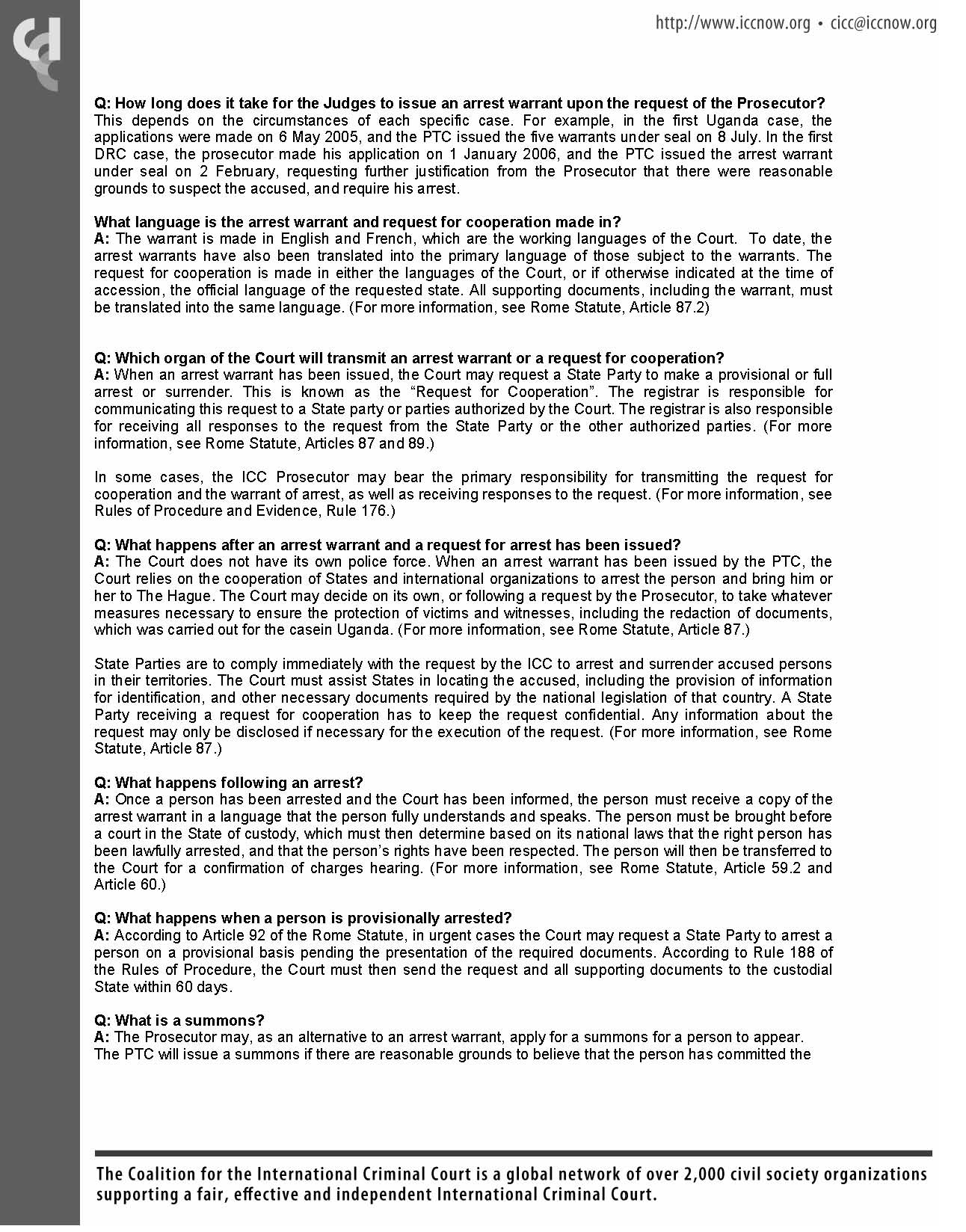 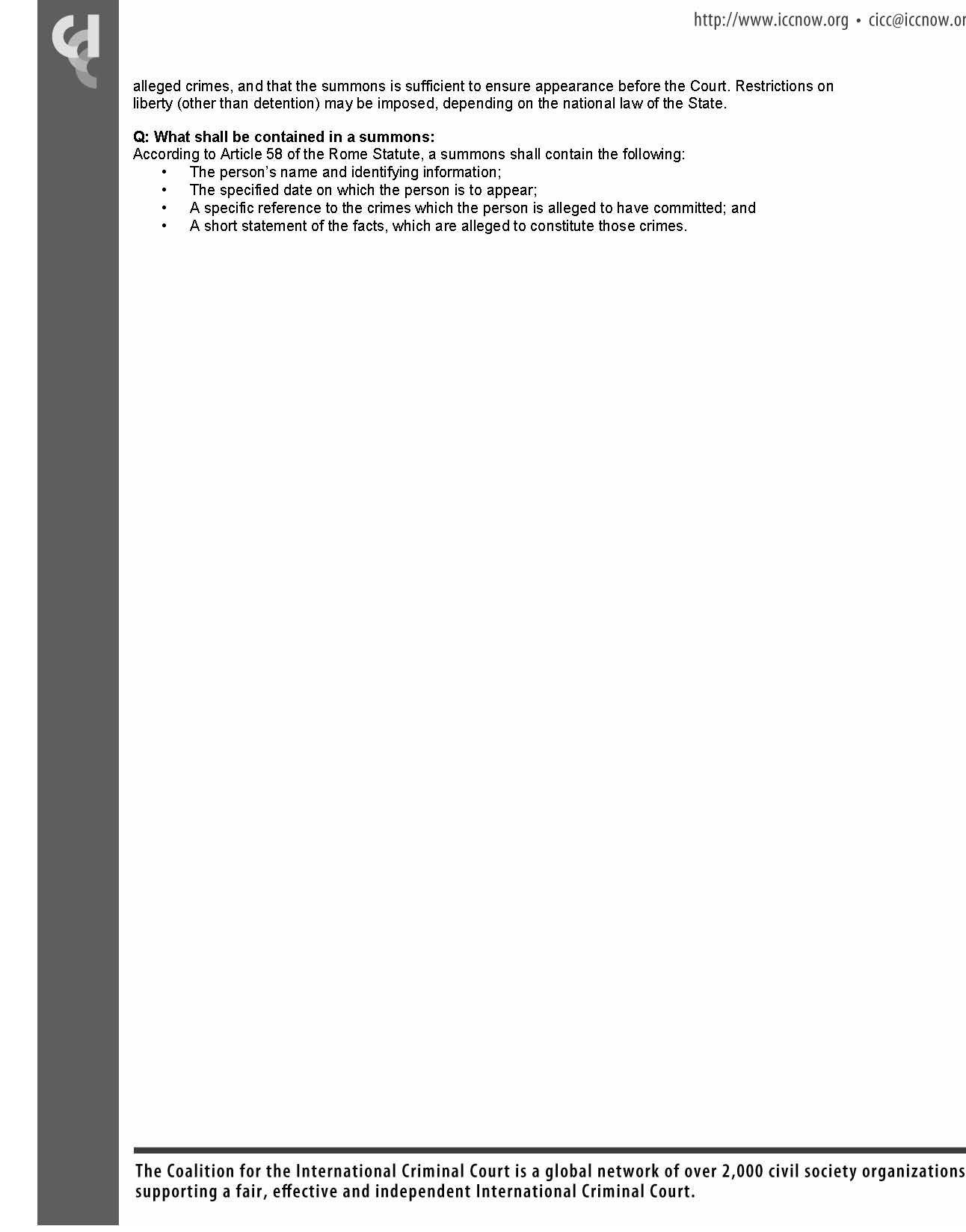 It appears that the proceedings and summons are under seal because there is no mention of it on the website of the ICC. In the ICC case The Prosecutor v. Bosco Ntaganda, an arrest warrant was under seal for two years. In other cases the warrants or summons were unsealed within a month. Freitas, however, appears to have been confident enough to disclose the matter to both the attorney and the Prosecutor for the County of Hawai‘i in a conference call because he did state to both that he may be traveling to Europe soon.

When Freitas disclosed to two officers of the State of Hawai‘i court that he received a summons from the ICC it should draw international attention because if Hawai‘i was a part of the territory of the United States the ICC would not have issued the summons in the first place. The United States has not agreed to the jurisdiction of the ICC and therefore the Court would have been precluded from sending a summons if Freitas was a judge within the territory of the United States of America. The acting Government acceded to the jurisdiction of the ICC, which provided the basis for the ICC to exercise jurisdiction over the Hawaiian Islands. Hawai‘i is not a part of the United States and has been under an illegal and prolonged occupation since 1898 in direct violation of international law and the law of occupation.