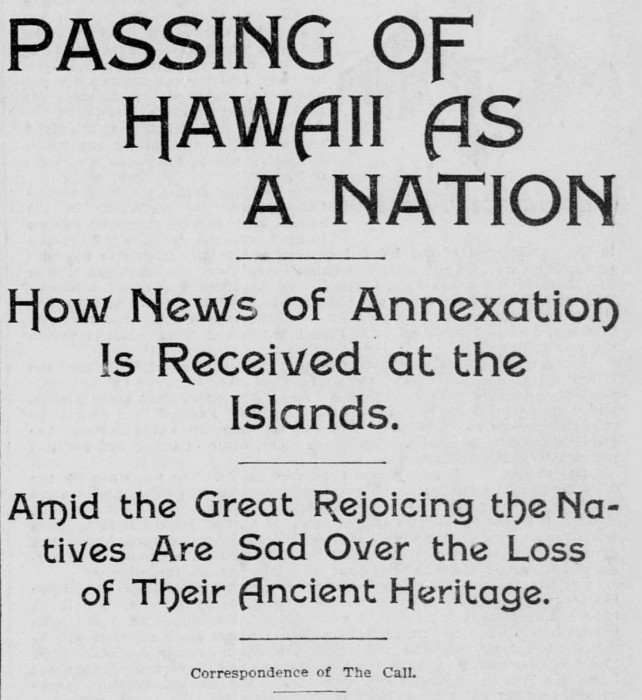 This article in the San Francisco Call newspaper was sent by Willy Kauai, a doctoral candidate in Political Science at the University of Hawai‘i at Manoa. Kauai’s doctoral research centers on Hawaiian nationality or citizenship, which spans from its origin under the reign of King Kamehameha I, progenitor of the Hawaiian Kingdom, through its legal evolution during the 19th century, and its maintenance under the laws of occupation to date.

Kauai’s research also addresses the racial discrimination injected into the population of the Hawaiian Islands since the usurpers seized temporary control of the Hawaiian government in 1887, which served as the precursor to the United States invasion and unlawful overthrow of the government of the Hawaiian Kingdom, and the ultimate occupation since the Spanish-America War in 1898.  The title of Kauai’s dissertation is “E/racing Hawaiian Citizenship Amid US Occupation.” Kauai will be defending his dissertation in April 2014 and is expected to graduate the following month with his Ph.D. degree.

On July 28, 1898, the San Francisco Call newspaper published responses by individuals in the Hawaiian Islands as to their reaction to the passing of the joint resolution by the United States Congress to annex the Hawaiian Islands titled “Passing of Hawaii as a Nation: How News of Annexation is Received at the Islands.” One particular response was titled “Haywood Gratified, Mohailani Very Sad.” Just ten months earlier, the San Francisco Call published a front-page story covering Hawaiian opposition to annexation titled, “Strangling Hands Upon a Nation’s Throat.” As a result of this opposition the United States Senate was unable to ratify a so-called treaty of annexation signed between the insurgents and the McKinley administration. Unable to accomplish the task by treaty, annexationists in the Congress introduced a joint resolution, instead. The Congress knew that a joint resolution, being a Congressional law, had no force beyond the borders of the United States, but they disguised the process as if it did, through propaganda, in order to conceal an illegal occupation of a foreign State for military purposes. 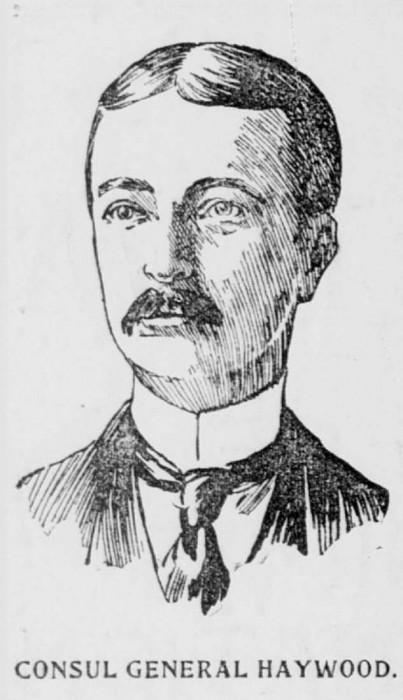 HONOLULU, July 20.—“I am naturally gratified that annexation has at last been accomplished,” said Consul General Haywood when the news of annexation reached him. “It is what I came to these islands to see done, and I am glad I have not had to go home disappointed. The United States has given to the people of these islands what I consider to be the greatest gift they could receive—American citizenship—which carries with it stable government and protection from the nations of the world. It only remains with the people here to make the most of the gift. This can only be done by forgetting past animosities and working harmoniously for the public good. Americans will then make of these islands not merely the paradise of the Pacific, but the Paradise of the world.”

HONOLULU, July 20.—To the Editor of the San Francisco Call: You ask me how we Hawaiians have received the news which has deprived us of our country and our nationality. I can only say that my countrymen are yet unable to realize the fact that the great republic which boasts of its democratic and republican principles has committed the unholy act which in history will be known as the “Rape of Hawaii.”

We had hoped that the joint resolution would be defeated in the Senate, and we were stunned when we learned of the vote, which results in the annihilation of our beloved country and in the driving to the wall of all Hawaiians. I can assure you that there is not one Hawaiian who in his heart favors annexation. What would you think of any man or woman who with indifference could see the flag of his or her country go down and their individually absorbed by a foreign race which, whatever you may say, does look down on us as their inferiors and despises our color and our way of living?

I can tell you, and few men have the opportunity of knowing the Hawaiians as I do, that many tears were shed when the news by the Coptic reached the homes of those who know no other country than these islands, which once were justly called the Paradise of the Pacific. We cannot be happy under our new conditions. We will feel like strangers among the people who will rule us, and with whose ideas, mode of living and political principles we cannot harmonize. 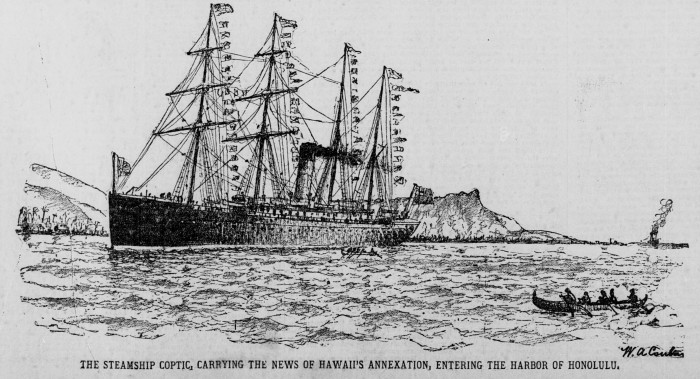 Our women feel it even worse than we men do. The teachings of the New England missionaries, the rum they brought with them, the diseases following in their train, have enervated the Hawaiian men. We can talk, don’t you forget it, but we cannot fight. If we had yet the fighting qualities of our ancestors, the overturn of our monarchy would never have taken place, and during the past years we would have been entitled to interference in the name of humanity in our struggles against the usurpers.

Our women have shown more energy, more solid patriotism and more strength than we have. The women of Hawaii to-day stand as a unit in their hatred toward America and everything American. And can you blame them? They see before them a future where their children will be forced into competition with your pushing, rushing, money-grabbing race. The dolce far niente of Hawaii must disappear and the struggle for life will begin in which the strongest will survive, and the gentle, indolent, easy-going Hawaiian will have no show in that battle for life, and who can blame us for feeling sad over a future which necessarily means destruction of our race?

I cannot deny that one great reason for our opposition to annexation is that we fear that we will be called “niggers” and treated as you do that class in your “free” country. We have been assured that such will not be the case, but experience tells us differently. Our countrymen who have traveled in the States have often been subjected to great humiliation and insult on account of their skin, and we expect that the day will come when we will risk similar affronts right in our streets, and remember that we have neither the wealth nor the inclination to strike our tents in other climes. We have no other home than Hawaii, and that home we have lost.

And what will our position be in the political and social life of these islands after your flag floats over the palace of our chiefs?

Senator Morgan of Alabama told a large assembly of Hawaiians, when he visited here, that he could promise them equal political rights with any American in any State of America. He told us that each of us would have as good a chance to become President of the United States as has Grover Cleveland. (I believe him in that.) He said that Hawaii would be a State, and that by the power of our majority we would control the affairs of Hawaii and enjoy true self-government. He paid a glowing tribute to our intelligence and excellent qualities, and told us how he loved “colored” people.

We didn’t believe a word of what that ex-slave driver from Alabama said, and there is no man more despised and loathed among the Hawaiians than Senator Morgan, who now is to frame a government for Hawaii.

The Hawaiians have at present no intention of taking any active interest in the government of their country. They feel like the children of Israel did when they sat down in exile and bemoaned their fate. What has happened cannot be undone, but none of us can see what your great country has gained by adding to the Union such unwilling and hostile people. We are not savages, as your Indians of Alaska, or ignorant as your “greasers.” For nearly a century we have conducted a fairly good government and lived in harmony with the white man who benefited from our hospitality and whose descendants now rob us of our country.

Go ask any man, woman or child what he thinks to-day of the “haole” (the foreigner), and you will get an answer in a very emphatic and plain language.

When Chinese and Japanese coolies are stopped from coming here as contract laborers we will have the satisfaction of laughing at the men who make their money out of slave labor and who brought on annexation to gain the benefit of the sugar bounty. But that satisfaction is very slim when we realize the fact that we will be trodden under foot by the invaders, and that when your flag, which we admire in its proper place, waves over Hawaii, to pronounce the fact that we are homeless and that our country has ceased to exist.

(It is not known who Mohailani is, but Hawaiians were known for using a pseudo name when authoring commentaries of a political nature. “Mohailani” is literally translated in the Hawaiian language as the “GREAT SACRIFICE.”)