In yesterday’s post “The San Francisco Call: Haywood Gratified, Mohailani Very Sad,” Mohailani appears to be a pseudo name, which is literally translated to “great sacrifice.” It was an emotional and comprehensive response of a bereaved person or persons. It is clear that the San Francisco Call knew whom to contact for responses and that “Mohailani” was someone that the Call was already familiar with.

The tenor of Mohailani’s response was definitely from someone who was already familiar with the Hawaiian opposition to annexation that included not just the men but also the women. This appears to point to the San Francisco Call’s coverage of the Hawaiian Patriotic League “Strangling Hands on a Nation’s Throat,” published September 30, 1897, and “Hawaii’s Last Struggle for Freedom,” published November 28, 1897. Both stories centered on a petition of over 21,000 signatures protesting annexation that was gathered by the Hawaiian Patriotic League.

The last story centered on a Hawaiian Commission that arrived in San Francisco on their way to Washington, D.C. James Kaulia, President of the Hawaiian Patriotic League, led a Hawaiian Commission of four men in order to present the signature petition to the United States Senate when it convened in December of 1897.

Could it be that “Mohailani” was the collective pseudo name for the Hawaiian Commission especially their stated loathe for Senator Morgan? 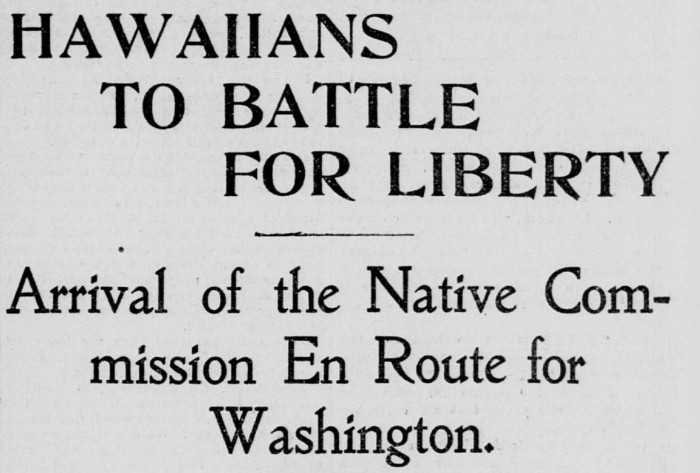 Hawaii has sent four of her representative men to plead wit the United States before annexation is consummated. These men, forming a committee unique in the history of modern nations, have arrived in San Francisco. On Monday they will proceed to Washington.

The committee consists of two full-blooded Hawaiians and two half-Hawaiians. The leader of the delegation is Mr. James K. Kaulia, the president of the Hawaiian Patriotic League. There are, besides, Mr. David Kalauokalani, the leader of the second Hawaiian society, which differs only in its opinion on local matters from the Patriotic League; Mr. William Auld, who is a possessor of considerable property on the island of Oahu, and Mr. John Richardson, a lawyer from the island of Maui, whose command of English, as well as his ability as a lawyer, makes him the spokesman of the party. 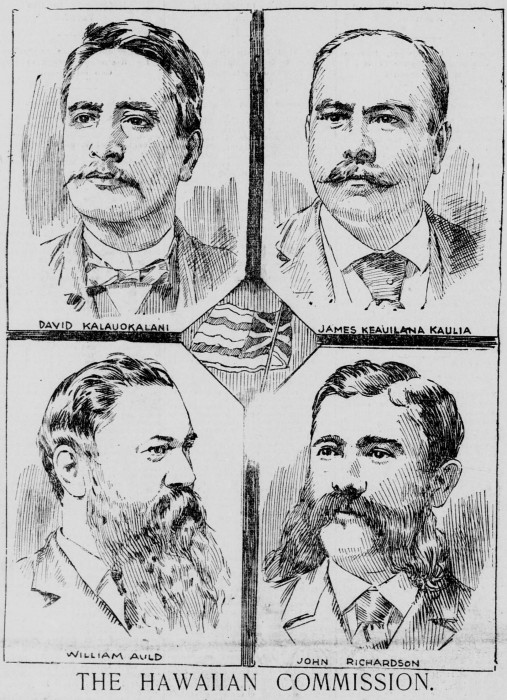 Mr. Richardson and Mr. Kaulia were interviewed by the The Call yesterday upon their mission.

“We are going to Washington,” said Mr. Richardson, “with the hope of inducing the President and the Committee on Foreign Relations to listen to our side of the question. From documents in our possession we think we can convince any fair-minded man that the great majority of the natives of Hawaii are opposed to annexation. If, from our showing, the United States is not assured of this fact, we shall ask that a vote be taken.”

Mr. Richardson threw open his arms. “It doesn’t matter. Even if the ballot be open the very men who have refused to sign our memorial will vote against annexation.”

“Then some Hawaiians have refused to sign the petition against annexation?”

“Nearly twenty-one thousand Hawaiians have signed the memorial we are taking to Washington. The men, the natives, who have refused to sign, tell us that it would hurt their business or jeopardize their positions if their names were added to our petition. But they are with us in feeling, and as John—Mr. Richardson—says, if it comes to a vote, they will forget every other consideration, and remember only that their country is being taken from them.”

“Your committee has been sent to Washington by the Hawaiians.”

“Yes, we four have been chosen to speak for Hawaii,” said Mr. Richardson. “The natives have subscribed liberally to the fund which pays our expenses. Maui, the island of Maui, is the leader in this. At first the Hawaiians would not believe that there was really any danger of annexation. But on Maui—Maui is a unit on anti-annexation sentiment—we insisted that a delegation be sent. You know the native didn’t believe it possible that the United States would annex the islands, knowing the opposition of the Hawaiians. They wouldn’t believe that things could go so far.”

“And what is their opinion now?”

“Now they are thoroughly awakened to the danger. But they are hopeful—”

“The United States cannot,” interrupted Mr. Kaulia, “if it has any regard for justice, annex our country, after our protest. We have come to make known how the natives feel in the matter. I tried to see Senator Morgan when he was in Honolulu. Twice I wrote asking him when he could see me, when he could listen to us—he had listened long to the annexationists—but I received no answer. The natives are very bitter in their dislike of him, for they know how determined he is on annexation.”

“But there is considerable opposition,” said Mr. Richardson. “Senators Du Boise and Pittigrew, who came upon on the same steamer with us, have spent ten days on the islands. They see and admit the injustice that would be done the Hawaiians if their country were taken from them. Senator Du Boise says that he hasn’t met one native Hawaiian who is in favor of annexation, and he went as far as the island of Hawaii. He didn’t remain in Honolulu.”

“In case, though, of annexation, what will the Hawaiians do?”

Mr. Richardson spoke very seriously. “If the people of the United States take Hawaii the natives will have to kept down by force—as they are now.”

“We hope to convince your Government that the Government of the Islands was overthrown by means of American warships; that the present is not a representative Government, and that the Hawaiians will never be reconciled to the loss of nationality.”

“The members of the administration are doing everything in their power to bring about annexation. If they learn that they are not likely to succeed in this way they will try another. They will do as they did before—declare that their lives and property are in danger and ask that the American flag be raised. And we know, we Hawaiians, that if the flag goes up again it will never come down.”

“But what will you do about it?” Mr. Richardson was asked.

“We will fight,” he answered determinedly. “We will turn upon the administration, and we will fight before we let that flag go up again.”

“The Hawaiians are very peaceable people—very easy going and good natured. They do not become angry easily. It takes a great deal to rouse them. But they are roused now. They recognize that if resistance is to be made it must be now. They can fight—they will fight rather than allow their land, their own country, to be taken from them.”