Will Faulk, a journalist for the San Diego Free Press, has consented to the reprint of his article that was published online today April 29, 2015.

In the first essay of my Protecting Mauna Kea series, I made a mistake. I wrongfully described the ongoing, illegal American occupation of Hawai’i as an “annexation.”

Hawaiian friends of mine pointed this out to me and gave me a thorough history lesson. I was referred to documents, books, and websites that tell the truth. For the last several days, I’ve been reading everything I can on the subject.

The more I read, the more convinced I become not only that the Thirty Meter Telescope project lacks any legal right to build on Mauna Kea, but that international law, indeed American law itself, demands that the United States end it’s occupation of Hawai’i.

I have two hopes for this piece. First, I want to give a history lesson for haoles. “Haole” is the Hawaiian word for white person. I am specifically directing this lesson at white settlers – at haoles – because the first thing haoles can do is understand the history of violence we benefit from.

This history lesson will demonstrate that the current regime controlling Hawai’i is illegitimate and as such has no authority to enforce the construction of the TMT on Mauna Kea.

Second, I want to relieve Hawaiians from the responsibility of educating haoles. Hawaiians have no responsibility to educate us. As a white settler hoping to stand in true solidarity with Hawaiians, I am upset with myself for the mistake. I have seen how frustrating it can be for a movement when valuable time must be spent coaching well-meaning settlers along.

I want to be clear: I am not advocating for a “call-out” culture on the front lines of resistance where resisters perpetually attack each other for their choice of words. Many of us must go through our personal experiences unlearning the lies we are taught and this takes time. The dominant culture, of course, does an excellent job lying. That’s why it’s the dominant culture.

But, I am saying that settlers need to take responsibility for educating other settlers. Leaving education to oppressed classes, forcing them to do the work of spreading consciousness, is a form of oppression in itself.

Before I begin, it is necessary to explain that this essay represents my opinions and my personal perspective of Hawaiian history stemming from the research I’ve done and been directed to. I am not a spokesperson for the Hawaiian people, neither am I spokesperson for the Mauna Kea protectors. I understand that there is no One True History, but I refuse to abide by the relativism I see perpetuating around me.

Make no mistake, if the construction of the TMT project results in the spill of hazardous chemicals in the largest freshwater aquifer on the Island of Hawai’i – a very real possibility – there will be very real consequences for life on the Island.

Milan Kundera famously stated the “struggle against oppression is the struggle of memory against forgetting.” I have found this to be shockingly true learning the history of Hawai’i. It is my belief that haoles have forgotten – or never knew – the history of Hawai’i. If we did not forget, there would be more of us supporting the Mauna Kea protectors and supporting true Hawaiian sovereignty.

What have we forgotten?

It starts centuries ago when Hawaiians first arrived in Hawai’i. Over the centuries, Hawaiians developed a culture based on ecological balance that included communal land tenure. I am very self-conscious that my attempts to explain a complex culture that existed for centuries before the arrival of Europeans would amount to so much generalization. I cannot possibly do the Hawaiian culture justice in a short essay, but so many discussions of Hawaiian history begin with the arrival of Captain Cook in 1778 erasing Hawaiian history pre-European contact.

From 1826 until 1893, the United States government recognized the independent Kingdom of Hawai’i including full, complete diplomatic relations with the Hawaiian government. For all intents and purposes, the United States viewed Hawai’i as a nation just like Mexico, Canada, or Great Britain. In fact, the United States entered into treaties involving navigation and commerce with Hawai’i in 1826, 1842, 1849, 1875, and 1887. 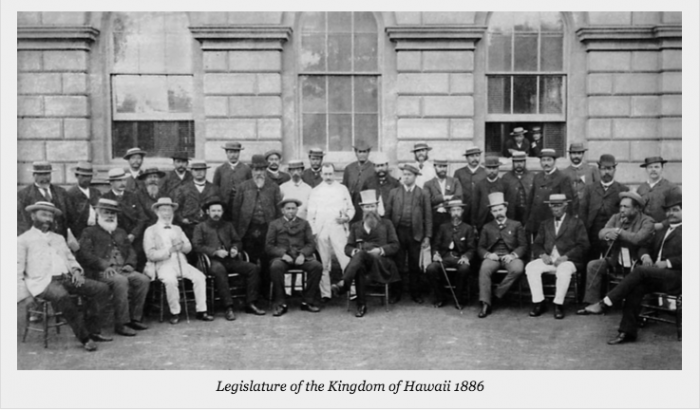 Then, in January, 1893, John L. Stevens, an American agent in Hawaii (his official title was United States Minister), conspired with non-Hawaiians and members of the U.S. Navy to overthrow the Hawaiian government. On January 16, 1893, Stevens and armed US naval personnel invaded Hawai’i and positioned themselves next to Hawaiian governmental buildings including Iolani Palace to intimidate Queen Liliuokalani. Queen Liliuokalani, under threats of bloodshed, yielded her authority to the government of the United States – NOT Stevens’ provisional government – until the time the United States would undo the actions of its representatives in Hawai’i.

Grover Cleveland was the president in 1893 and he initiated an investigation into the actions of Stevens and his cronies while calling for the restoration of the Hawaiian monarchy. The investigation concluded that Stevens and other US officials in Hawaii had abused their authority and had engaged in “an act of war.”

In 1896, William McKinley replaced Grover Cleveland as president. Using the excuse of the Spanish-American war and the need for a naval base in the Pacific, McKinley and the Senate began to entertain the notion of annexing Hawai’i, again.

In 1897, the Hawaiian people delivered a massive petition where nearly 90% of Hawaiians alive at the time declared their desire not to become part of the United States of America. Unable to secure a treaty of annexation, Congress passed a joint resolution titled “the Newlands Resolution” on July 7, 1898.

The illegality of this joint resolution is one of the most important things to understand about Hawaiian history. This resolution had no legal basis, had no validity, and was possible simply because of the armed might of the United States.

The resolution has no legitimate basis because laws passed by Congress have no authority internationally. Congress can only pass laws that apply within the United States.

Hawaiian legal scholar Dr. Keanu Sai explains it better than I can in his blog-article “International Law Prevents Construction of the Thirty Meter Telescope” when he writes, “The underlying problem that Congressmen at the time knew was that no law of Congress can have any force and effect beyond the borders of the United States. In other words, the United States could no more annex the Hawaiian Islands by passing a domestic law, than it could annex Canada today by passing a law.”

As part of the Newlands Resolution, the Republic of Hawai’i passed 1,800,000 acres of what had been crown, government, and public lands of the Kingdom of Hawai’i to the control of the United States. Included in this land is Mauna Kea. Through the acquisition of Mauna Kea in this way, the State of Hawai’i has leased land on Mauna Kea for the TMT’s construction. But, an illegal state giving land acquired illegally can only give – you guessed it – an illegal lease.

Of course, you don’t have to take my word for this history, because all of these facts were already admitted and apologized for by Congress on November 23, 1993. You can read their apology here.

So, can you see why we cannot call the occupation of Hawai’i an annexation? No treaty of annexation was ever signed. “Annexation” implies consent on the part of those annexed and clearly the Hawaiian people never consented.

There’s something, though, that bothers me about all this. How can the American government and the American people after learning this history, after admitting the wrongs done to Hawai’i still allow something like the TMT project to happen? I think the answer is that learning the history is only the first small step. Knowing the history, we must act.

One of the intentions behind my writing is to try to understand how so many people can recognize problems in the world and then fail to act to solve those problems. I am a haole, so I can only speak as a haole, and I believe too many haoles settle for pointing out their privilege while the more important work involves undermining the forces that grants them that privilege over others in the first place. The history is clear. Hawaiians are being wronged. Now, we need to act.