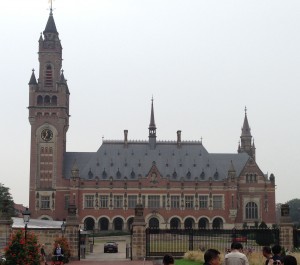 The International Court of Justice is one of three principal organs of the United Nations together with the General Assembly and the Security Council. It is located in the city of The Hague, Netherlands, and sits within the Peace Palace along with the Permanent Court of Arbitration. According to its website, “The Court’s role is to settle, in accordance with international law, legal disputes submitted to it by States and to give advisory opinions on legal questions referred to it by authorized United Nations organs and specialized agencies. The Court is composed of 15 judges who are elected for terms of office of nine years by the United Nations General Assembly and the Security Council. It is assisted by a Registry, its administrative organ. Its official languages are English and French.”

If a private individual or group attempts to file an Application Instituting Proceedings against a State with the ICJ, the Registrar does not acknowledge receipt of the Application, but rather sends a template letter, either by mail or email, that states:

In reply to your email or mail, I have to inform you that the International Court of Justice is not authorized, in view of its functions strictly defined by its Statute (Article 34) and Rules, to give advice or make observations on questions such as those raised in your communication.

The Court’s activities are limited to rendering judgments in legal disputes between States submitted to it by the States themselves and giving advisory opinions when it is so requested by UN organs or specialized agencies of the UN system.

It follows that neither the Court nor its Members can consider applications from private individual or groups, provide them with legal advice or assist them in their relations with the authorities of any country.

That being so, you will, I am sure, understand that, to my regret, no action can be taken on your communication. 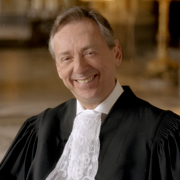 The Registrar of the ICJ, Philippe Couvreur, serves in similar fashion to a Clerk of a Court that receives and file stamps civil and criminal complaints. The Registrar’s duty is to ensure that the party filing an Application (Complaint) is a State, whether a member or non-member of the United Nations, and that it meets the compliance provided for in the Statute and Rules of the ICJ. Once it meets the requirements and before it is submitted to the Judges, the Application must be translated by the Registrar’s office into both the English and French languages, a bilingual version of the State’s Application must be printed and a copy sent to the Secretary General of the United Nations and other States who have access to the ICJ, the case must be listed on the ICJ General List, and a press release must be sent to the media announcing the filing of the Application.

In order for the Registrar to complete these tasks he has a staff that includes a Deputy Registrar, a Legal Matters Department, a Linguistic Matters Department, an Information Department and 5 Technical Divisions comprised of Finance, Publications, Information and Communications Technology, Archives-Indexing and Distribution, and Text Processing and Reproduction. The funding of the ICJ is a portion drawn from the Regular Budget of the United Nations. The 2013 Regular Budget of the United Nations was $5.2 billion US dollars, and the proportionate budget for the ICJ was $47.7 million US dollars, which pays for these tasks to be completed by the Registrar’s office before the Court can take any action. If the State is a non-Member of the United Nations, it would have to contribute to cover the expenses of the Registrar’s office and Judges before the Court can taken any action. Article 35, paragraph 3 of the Statute of the ICJ states “When a state which is not a Member of the United Nations is a party to a case, the Court shall fix the amount which that party is to contribute towards the expenses of the Court. This provision shall not apply if such state is bearing a share of the expenses of the Court.”

On September 25, 2013, the Hawaiian Kingdom submitted to the Registrar of the International Court of Justice an “Application Instituting Proceedings” against 45 States for treaty violations and violations of international law. In addition, a “Request for the Indication of Provisional Measures of Protection” was also submitted requesting the Court to issue an order compelling the 45 States named in the complaint to no longer recognize the United States presence in Hawai‘i as legal. The Hawaiian Kingdom had previously deposited its declaration accepting jurisdiction of the International Court of Justice with the Secretary General of the United Nations on September 6, 2013 in accordance with Article 36 of the Statute of the Court.

As a non-Member State of the United Nations, the Hawaiian Kingdom is responsible for covering the expenses of the Court as required under Article 35 of the Statute and, without providing its share to cover these costs, the Registrar’s office would not be able translate the Application into the French language and print out a bilingual version of the Application for the other States named in the Application, the Judges of the ICJ and the Secretary General of the United Nations. In other words, the Court cannot take any action on the case until the matter of costs is settled. 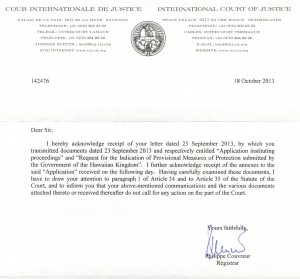 On September 28, 2013, the Hawaiian Kingdom provided a cashier’s check made out to the International Court of Justice to cover the expenses of the Court in the Hawaiian case. The Hawaiian Kingdom arrived at this amount by following the calculations used by the United Nations for member States to contribute their share to the 2013 Regular Budget, which included the proportionate share to the International Court of Justice.

After further thought on the matter, the Hawaiian Kingdom concluded that the United States of America has already paid its share to the Court for 2013. The United Nations measurement of costs incurred by member States is based on the country’s gross national income (GNI), which is also called the gross nation product (GNP). The United States has unlawfully seized control of the Hawaiian GNI and a large portion of the United States revenue derives from Internal Revenue Service (IRS) taxes. In 2012, the IRS collected $2.2 trillion dollars, of which residents and businesses in the Hawaiian Islands paid $5.1 billion dollars. As an occupier, the United States cannot collect taxes in a foreign country for its own benefit, and if it does it is called plundering. Unlawful appropriation of private property is plundering and extensive appropriation of property, not justified by military necessity and carried out unlawfully and wantonly, is a war crime. In other words, the United States’ contribution of $618.5 million made to the United Nations 2013 Regular Budget, of which $5.7 million went to the International Court of Justice, is tainted with stolen property from the residents of an illegally occupied State.