The program began promptly at 6:30 pm with an introduction by Dr. Max Schweizer,

Executive Director of the Swiss Diplomats-Zurich Network, welcoming everyone in attendance, which included former Swiss Ambassadors and Diplomats, students from the University of Zurich’s Center of Foreign Affairs & Applied Diplomacy, as well as

people from the public sector. Dr. Schweizer is Head of the Center of Foreign Affairs & Applied Diplomacy that trains future diplomats from Switzerland and other foreign countries. Dr. Schweizer also introduced Maximilian Stern, Executive Director of foraus, a think-tank for Swiss Foreign Policy, which co-sponsored the event.

presentation on the historical background of Swiss-Hawaiian relations. Professor Schweizer is also a faculty member at the University of Hawai‘i at Manoa and teaches a college course titled Europeans in the Pacific. Professor Schweizer also provided an incredible link from Huldrych Zwingli (1484-1531), who was a religious leader of the Reformation in Zurich, to John Calvin (1509-1564) who was part of the Reform in Geneva, Switzerland, to the Calvinist missionaries from the United States that arrived on the island of Hawai‘i in 1820. His presentation ended by stating there is a lot more history to Hawai‘i than Waikiki and tourism.

Dr. Sai then followed with his power point presentation Hawai‘i: An American State or a 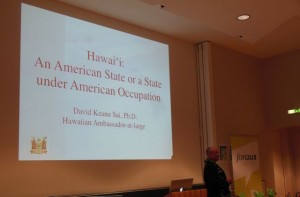 State under American Occupation. The presentation covered the legal and political history of the Hawaiian Kingdom; its treaty with Switzerland, the illegal overthrow; the ensuing illegal and prolonged occupation by the United States; the Protest and Demand filed with the United Nations General Assembly; the Referral filed with the International Criminal Court; the Application Instituting Proceedings at the International Court of Justice with Switzerland named as a defendant; and the ongoing commission of war crimes. A panel discussion immediately followed the presentation.

The panel was comprised of Dr. Sai, Professor Schweizer and Dr. Christian Blickenstorfer, who is President of the Swiss Diplomats-Zurich Network as well as former Swiss Ambassador to the United States, Saudi Arabia, United Arab Emirates, Oman, Yemen, and 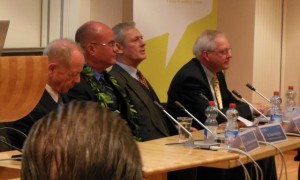 Germany. Dr. Schweizer moderated the panel. Dr. Blickenstorfer stated that when he visited the Hawaiian Islands while Ambassador to the United States, he clearly saw two versions of the Hawaiian Islands that he didn’t expect. First was the perception that Hawai‘i was the 50th State of the United States and the other was a kingdom with a Palace and the Royal Hawaiian Band. He clearly didn’t understand the distinction until Dr. Sai’s presentation, which he said was very informative and clear. Dr. Schweizer then asked Dr. Sai about his position as Ambassador-at-large and if he could explain to the audience his position and how he was appointed. Dr. Sai responded with a short narrative of how the acting government was established in 1996 utilizing laws of the Hawaiian Kingdom as it existed before the occupation in the provisional and temporary establishment of a Regency that was provided for under the Hawaiian constitution under the legal doctrine of necessity. The panelists and audience understood the application of the doctrine of necessity as it applies to government.

Questions were then taken from the audience that centered on the economy of the Hawaiian Kingdom and how would it look like during and after the occupation ends. Another question was by a Swiss Human Rights activist asking for Dr. Sai’s response to actions taken by Mr. Leon Siu who is trying to get Hawai‘i listed on the United Nations list of colonies in order for Hawai‘i to be de-colonized. She explained that Mr. Siu stated to her that all it takes is one country to support Hawai‘i’s listing, and she asked Dr. Sai for his thoughts or whether or not  Switzerland could be that country. Dr. Sai’s responded that it was not the appropriate action to be taken regarding Hawai‘i’s occupation, because to say that Hawai‘i is a colony of the United States is to imply that Hawai‘i is not an already existing sovereign, but occupied, State. He explained that de-colonization is the process of self-determination where the population of a colony will decide whether it wants one of three options; first, to be an independent and sovereign State; second, a status of free association with the former colonizer; or, third, total incorporation into the sovereignty of the colonizer. Because Hawai‘i’s government was illegally overthrown by the United States, does not mean Hawai‘i became a U.S. colony. The diplomats in the audience understood Dr. Sai’s response and agreed that de-colonization is not the process because the issue is State continuity and not the creation of State.

After the panel there was time for everyone to have some wine and to mingle. Dr. Sai was soon surrounded by the diplomatic students who were from Russia, France, Switzerland and Spain. The students from Russia, in particular, wanted a picture taken with Dr. Sai. There were specific questions from the students regarding economic trade between the Hawaiian Kingdom and European countries and how would that would look like. Dr. Sai explained that the treaties are still in force and that Hawaiian law provides for free trade. What resonated among the students and the diplomats was the clear understanding that the Hawaiian State would still exist under international law, despite its government being illegal overthrown. This was the basis for the Hawaiian Kingdom’s continued existence and the formation of the acting government. 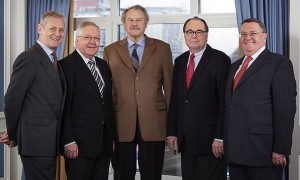 Diplomats-Zurich Network gave their support to the actions taken by the acting government and wished it well as it proceeds towards the path of de-occupation. What was conveyed to Dr. Sai, as they walked to the restaurant, was how logical a path the acting government has taken in light of a prolonged occupation. What was especially welcomed to these diplomats was the focus on re-education at the collegiate and secondary levels, as well as the community at large.

The next day Dr. Sai was given a message from one of the former Swiss ambassadors in attendance at the presentation the night before, where he wanted to convey to Ambassador Sai that he is a “very good diplomat.” Dr. Sai asked the individual who delivered the message if that was a compliment. His response to Dr. Sai was absolutely, especially coming from another Ambassador who was a seasoned diplomat.