Under Article 8 of the Rome Statute, it provides that the International Criminal Court “shall have jurisdiction in respect of war crimes in particular when committed as part of a plan or policy or as part of a large-scale commission of such crimes.” Article 8 further states that war crimes means “Grave breaches of the Geneva Conventions of 12 August 1949, namely, any of the following acts against persons or property protected under the provisions of the relevant Geneva Convention…Willfully depriving a…protected person of the rights of fair and regular trial.”

In his letters to the ICC, Kaiama stated this “communication and complaint is provided to the office of the Prosecutor pursuant to the Hawaiian Kingdom’s accession to the International Criminal Court’s Rome Statute deposited with the Secretary-General of the United Nations on December 10, 2012, and the Hawaiian Kingdom’s accession to the 1949 fourth Geneva Convention deposited with the Swiss Federal Council on January 14, 2013.”

According to Article 126 of the Rome Statute, the ICC would have jurisdiction “on the first day of the month after the 60th day following the date of the deposit of…accession with the Secretary-General of the United Nations,” which is March 4, 2013.

W.P. Dillon, Head of the Office of Information and Evidence Unit, Office of the Prosecutor, sent the following letter to Kaiama acknowledging receipt of the complaints. The letter was dated March 4, 2013, the date the ICC began jurisdiction over the Hawaiian Islands.

Dillon’s statement to Kaiama that the Prosecutor “will give consideration to this communication, as appropriate, in accordance with the provisions of the Rome Statute of the International Criminal Court,” is making specific reference to Article 17 of the Rome Statute titled “Issues of admissibility.” Since the ICC is a court of last resort where it compliments local courts of the country with primary responsibility to prosecute crimes, and not replace them, it can only intervene if (a) the perpetrators and being shielded, (b) there is an unjustifiable delay in the proceedings to bring the perpetrators to justice, or (c) where proceedings are not being conducted independently or impartially.

Article 17 also provides that the ICC “shall consider whether, due to a total or substantial collapse or unavailability of its national judicial system, the State is unable to obtain the accused or the necessary evidence and testimony or otherwise unable to carry out its proceedings.” This provision has a direct nexus to the illegal overthrow of the Hawaiian government by the United States on January 17, 1893, whereby the “national judicial system” was overthrown and to date has been replaced by illegally constituted courts in violation of the international laws of occupation, in particular, the 1949 Geneva Convention, IV.

An example of where the Prosecutor of the ICC has rejected a claim based on lack of jurisdiction occurred last year in 2012. On October 1, 2012, Enver Masud, as CEO for The Wisdom Fund (TWF), submitted a letter to the ICC Prosecutor providing “information about the coverup of the facts of 9/11 used to justify the wrongful invasion of Afghanistan.” Masud’s letter was in response to posting on the ICC website that stated “The OTP is currently conducting preliminary examinations in a number of situations including Afghanistan, . . . ” and one is invited to “submit information about alleged crimes.” The Office of the Prosecutor received Masud’s letter on October 10, 2012.

Enver Masud is founder and CEO of TWF, and the recipient of the 2002 Gold Award from the Human Rights Foundation for his book The War on Islam. He is also a co-author of Islam: Opposing Viewpoints, and 9/11 and American Empire. TWF is a non-profit organization based in Arlington, Virginia, U.S.A. TWF’s mission is to advance social justice and peace.

On November 27, 2012, W.P. Dillon, Head of the Office of Information and Evidence Unit, Office of the Prosecutor, sent the following letter to Masud declining to consider the allegations on jurisdictional grounds. 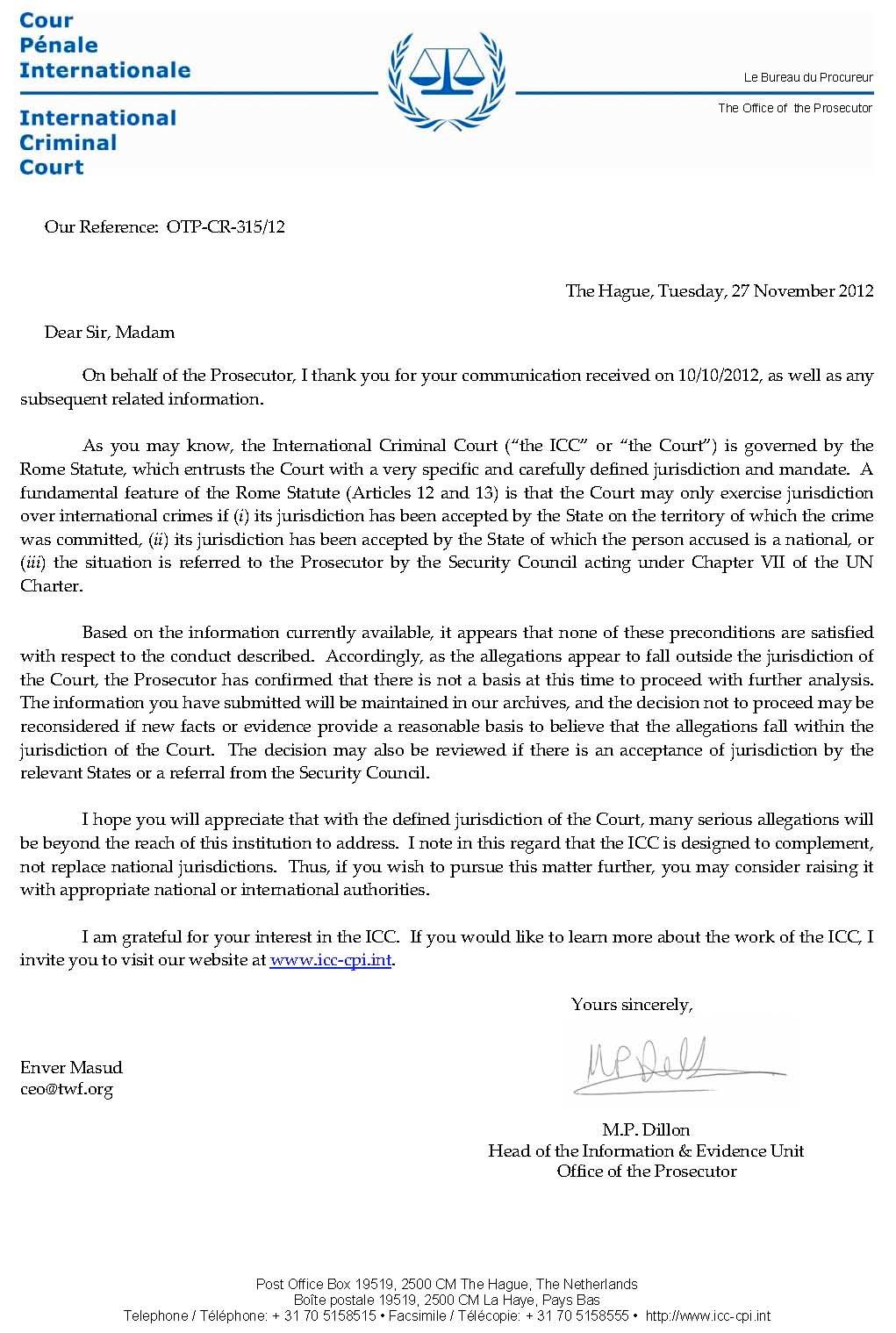 The reason why the ICC could not claim jurisdiction over international crimes alleged to have been committed within the United States when individuals planned the invasion of Afghanistan was because the United States of America did not grant jurisdiction to the ICC.  In 2000, the Clinton Administration signed the Rome Statute, but the Bush Administration refused to ratify the Rome Statute and declared it would not be a party to the ICC. Therefore, the ICC cannot claim it has jurisdiction over international crimes committed within the territory of the United States of America.

If the Hawaiian Islands were a part of the United States of America, being the so-called 50th State of the American Union, the ICC would have sent a letter to Kaiama similar to its letter sent to Masud who was alleging international crimes took place within the territory of the United States. Especially when the alleged war criminals include the Governor, Attorney General, Deputy Attorney Generals and Judges who are government officials of the so-called State of Hawai‘i.

Instead, the ICC letter to Kaiama acknowledges receipt of the complaints and it will provide its response according to the Rome Statute regarding international crimes committed within the territory of the Hawaiian Kingdom, which has been under a prolong and illegal occupation by the United States since August 12, 1898.