Russia’s Black Sea Naval Fleet is based at Sevastopol Naval Base in Crimea, which gives Russian naval vessels access to the Mediterranean and Aegean Seas, and further to the Atlantic Ocean. The two waterways that provide access from the Black Sea are Turkey’s Bosporus Straits and the Strait of the Dardanelles. Sevastopol Naval Base was also at the center of a war between Russia and the Ottoman Empire in 1853 over this access after Russia insisted that the Ottoman Turks recognize Russia’s right in the Middle East in order to protect Russian Orthodox in the Ottoman Empire. The Ottoman’s refused and war broke out. On March 28, 1854, France and Great Britain joined the war on the side of the Ottoman Turks in order to prevent Russia’s increase in power over the region.

Naval battles between Russia and the French and British also spilled over to the Pacific Ocean where all three countries had naval and merchant ships. Battles were not confined to Crimea and the Caucasus, but were also fought in the Japan Seas, the Okhotsk Seas and in the North Pacific Ocean, and there was concern in Hawai‘i that it could reach the Hawaiian Islands. Just eleven years since Great Britain and France recognized the Hawaiian Kingdom as an independent State, King Kamehameha III, in Privy Council, declared the Hawaiian Kingdom to be a neutral State on May 16, 1854. 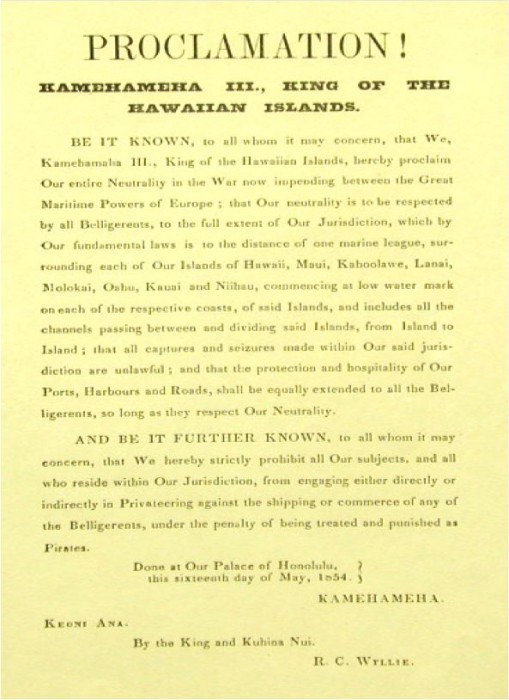 Prior to their impending involvement in the Crimean War, Great Britain and France each issued formal Declarations on March 28, 1854, and March 29, 1854, that declared neutral ships and goods would not be captured. Prior to this, international law did not afford protection for neutral ships carrying goods headed for the ports of countries who were at war. Under international law, these ships could be seized by either country’s naval vessels or by private ships that were commissioned by a country at war, which is called “privateering” and the goods seized were called “prizes.” The British and French diplomats that were posted in the Hawaiian Kingdom delivered both Declarations to the Hawaiian government.

On June 15, 1854, the Hawaiian Committee on the National Rights in regards to prizes had delivered its report during a meeting of the Privy Council in Honolulu. Robert C. Wyllie, Hawaiian Minister of Foreign Affairs, presented the committee report and the following resolution was passed and later made known to the countries engaged in the Crimean War.

“Resolved: That in the Ports of this neutral Kingdom, the privilege of Asylum is extended equally and impartially to the armed national vessels and prizes made by such vessels of all the belligerents, but no authority can be delegated by any of the Belligerents to try and declare lawful and transfer the property of such prizes within the King’s Jurisdiction; nor can the King’s Tribunals exercise any such jurisdiction, except in cases where His Majesty’s Neutral Jurisdiction and Sovereignty may have been violated by the Captain of any vessel within the bounds of that Jurisdiction.”

“I have the honor to transmit to you a project of a declaration in relation to neutral rights which my Government has instructed me to submit to the consideration of the Government of Hawaii, and respectfully to request its approval and adoption. As you will perceive it affirms the principles that free ships make free goods, and that the property of neutrals, not contraband of war, found on board of Enemies ships, is not confiscable. These two principles have been adopted by Great Britain and France as rules of conduct towards all neutrals in the present European war; and it is pronounced that neither nation will refuse to recognize them as rules of international law, and to conform to them in all time to come. The Emperor of Russia has lately concluded a convention with the United States, embracing these principles as permanent, and immutable, and to be scrupulously observed towards all powers which accede to the same.”

On January 12, 1855, the U.S. diplomat also sent another dispatch to the Hawaiian government that contained a copy of the July 22, 1854 Convention between the United States of America and Russia embracing certain principles in regard to neutral rights. After careful review of the U.S. President’s request, King Kamehameha IV in Privy Council, passed the following resolution on March 26, 1855.

“Resolved: That the Declaration of accession to the principles of neutrality to which the President of the United States invites the King, is approved, and Mr. Wyllie is authorized to sign and seal the same and pass it officially to the Commissioner of the United States in reply to his dispatches of the 6th December and 12th January last.”

Following the Privy Council meeting on the same day, Robert C. Wyllie signed the Declaration of Accession to the Principles of Neutrality as requested by the United States President and delivered it to the U.S. diplomat David L. Gregg. The Declaration provided,

“And whereas His Majesty the King of the Hawaiian Islands, having considered the aforesaid invitation of the President of the United States, and the Rules established in the foregoing convention respecting the rights of neutrals during war, and having found such rules consistent with those proclaimed by Her Britannic Majesty in Her Declaration of the 28th March 1854, and by His Majesty the Emperor of the French in the Declaration of the 29th of the same month and year, as well as with Her Britannic Majesty’s order in Council of the 15th April same year, and with the peaceful and strictly neutral policy of this Kingdom as proclaimed by His late Majesty King Kamehameha III on the 11th May 1854, amplified and explained by Resolutions of His Privy Council of State of the 15th June and 17th July same year, His Majesty, by and with the advice of His Cabinet and Privy Council, has authorized the undersigned to declare in His name, as the undersigned now does declare that His Majesty accedes to the humane principles of the foregoing convention, in the sense of its III Article.”

On April 7, 1855, King Kamehameha IV opened the Legislative Assembly. In his speech he reiterated the Kingdom’s neutrality by stating:

“It is gratifying to me, on commencing my reign, to be able to inform you, that my relations with all the great Powers, between whom and myself exist treaties of amity, are of the most satisfactory nature. I have received from all of them, assurances that leave no room to doubt that my rights and sovereignty will be respected. My policy, as regards all foreign nations, being that of peace, impartiality and neutrality, in the spirit of the Proclamation by the late King, of the 16th May last, and of the Resolutions of the Privy Council of the 15th June and 17th July. I have given to the President of the United States, at his request, my solemn adhesion to the rule, and to the principles establishing the rights of neutrals during war, contained in the Convention between his Majesty the Emperor of all the Russias, and the United States, concluded in Washington on the 22nd July last.”

The actions taken by the governments of the Hawaiian Kingdom, Great Britain, France, Russia, and the United States of America relating to the development of the principles of international law on neutrality provided the necessary pretext for the leading European maritime powers to meet in Paris, after the Crimean War, and enter into a joint declaration that provided the following four principles: first, privateering is, and remains, abolished; second, the neutral flag covers enemy’s goods, with the exception of contraband of war; third, neutral goods, with the exception of contraband of war, are not liable to capture under the enemy’s flag; and, fourth, blockades, in order to be binding, must be effective, that is to say, maintained by a force sufficient really to prevent access to the coast of the enemy.

The Declarations and the 1854 Russo-American Convention represented the first recognition of the right of neutral States to conduct free trade without any hindrance from war. Stricter guidelines for neutrality were later established in the 1871 Anglo-American Treaty made during the wake of the American Civil War, whereby both States agreed to the following rules.

“First, to use due diligence to prevent the fitting out, arming, or equipping, within its jurisdiction, of any vessel which it has reasonable ground to believe is intended to cruise or to carry on war against a power with which it is at peace; and also to use like diligence to prevent the departure from its jurisdiction of any vessel intended to cruise or carry on war as above, such vessel having been specially adapted, in whole or in part, within such jurisdiction, to warlike use.

Second, not to permit or suffer either belligerent to make use of its ports or waters as the base of naval operations against the other, or for the purpose of the renewal or augmentation of military supplies or arms, or the recruitment of men.

Thirdly, to exercise due diligence in its own ports and waters, and, as to all persons within its jurisdiction, to prevent any violation of the foregoing obligations and duties.”

Newer and stricter rules for the conduct of neutral States were expounded upon in the 1874 Brussels Conference, and later these principles were codified in the Fifth and Thirteenth Hague Conventions of 1907, governing the rights and duties of neutral States in Land and Maritime warfare.

3 thoughts on “Hawaiian Neutrality and the Crimean Conflict”