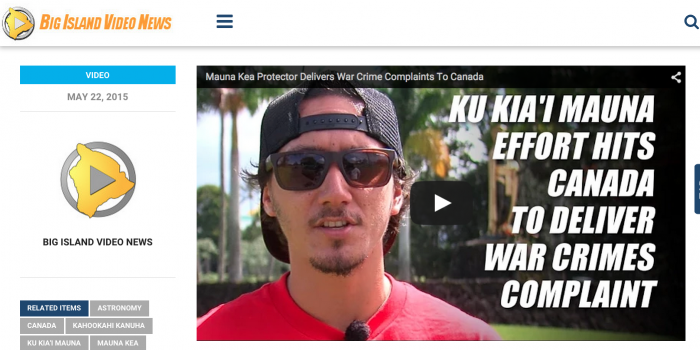 HILO – On May 14, it was reported that a war crimes complaint was filed in Canada in connection with the planned Thirty Meter Telescope project on Mauna Kea. Since then, Kaho‘okahi Kanuha – one of the two individuals that made the international trip to deliver the complaint – returned to Hawaii. Kanuha is a spokesperson for the group that is blocking TMT from the summit of Mauna Kea. We spoke to him in Hilo on Saturday afternoon, May 16th.

The complaint was drafted by Kanuha’s attorney Dexter Kai’ama. Kanuha was accompanied by Dr. Keanu Sai, who drafted a detailed War Crimes Report at the request of Kai’ama. Shortly after the headline grabbing arrests that took place on the mountain on April 2, Big Island Video News spoke to both men.

One of the 31 arrested on Mauna Kea was Kanuha. Since then, his role in the movement has transformed as he takes on speaking engagements across the islands, although his position in regards to the TMT has not changed.

Since this interview was conducted, TMT announced Canada as a full partner in the project.