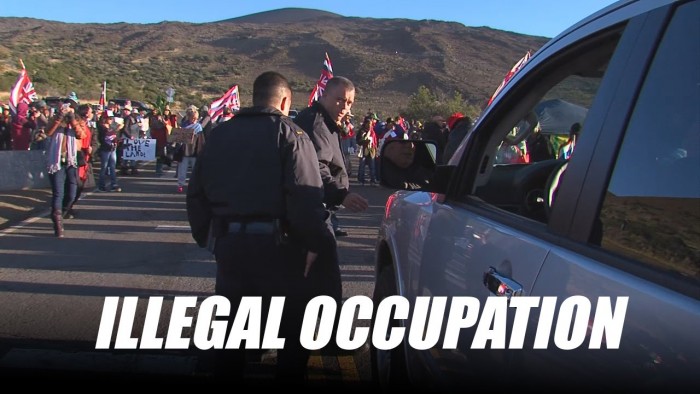 On April 17, 2015 the following cease and desist letter was sent by Dexter Kaiama, legal counsel for Chase Kaho‘okahi Kanuha and Lanakila Mangauil, to Douglas Ing from the law firm Watanabe and Ing who is the legal counsel for TMT International Observatory, LLC. Kanuha and Mangauil are the leaders of the protectors of Mauna Kea.

The cease and desist letter was also sent to the Canadian Department of Justice, who investigates war crimes, the Prosecutor the International Criminal Court, the Board of Regent of the University of Hawai‘i, the State of Hawai‘i Board of Land and Natural Resources, the Trustees of the Office of Hawaiian Affairs, County of Hawai‘i Police Department.

This law office represents Chase Kaho‘okahi Kanuha and Lanakila Mangauil, both being Hawaiian subjects of the Hawaiian Kingdom with vested undivided rights in the lands as native tenants under Hawaiian law.

Your client, TMT International Observatory, LLC, is hereby directed to immediately cease and desist in the construction of a 30-meter telescope on the summit of Mauna Kea that is situated within the ahupua‘a of Ka‘ohe, district of Hamakua, Island of Hawai‘i, Hawaiian Kingdom. The ahupua‘a of Ka‘ohe is public land under the administration of the Minister of the Interior of the Hawaiian Kingdom under An Act Relating to the Lands of His Majesty the King and of the Government (1848). The Hawaiian Kingdom has been under an illegal and prolonged occupation by the United States of America since August 12, 1898 during the Spanish-American War.

On behalf of my clients, be advised that the construction of the 30-meter telescope is a war crime in violation of:

The United States military’s omission of preventing the destruction of the public property of the Hawaiian Kingdom is also a war crime in violation of:

The Final Declaration adopted by the International Conference for the Protection of War Victims in 1993 urged all States to make every effort to, “Reaffirm and ensure respect for the rules of international humanitarian law applicable during armed conflicts protecting…the natural environment…against wanton destruction causing serious environmental damage.” In its advisory opinion in the Nuclear Weapons case in 1996, the International Court of Justice stated, “States must take environmental considerations into account when assessing what is necessary and proportionate… Respect for the environment is one of the elements that go to assessing whether an action is in conformity with the principle of necessity.”

War crimes of destruction of real property on the summit of Mauna Kea belonging to the occupied State have been committed since the State of Hawai‘i leased 13,321.054 acres of the summit of Mauna Kea to the University of Hawai‘i in 1968. Thirteen telescopes have been constructed as permanent fixtures since 1970, and your client will make it fourteen. TMT International Observatory, LLC, has already committed the war crime of destruction of property when it began the construction of the 30-meter telescope by breaking ground, and has committed secondary war crimes of unlawful confinement (Article 147, Geneva Convention, IV) when 31 individuals who were preventing TMT International Observatory, LLC, from committing additional destruction.

The Hawaiian Islands was never an incorporated territory of the United States and is currently under an illegal and prolonged occupation. The Hawaiian Kingdom was recognized as an independent and sovereign State since November 28, 1843 by joint proclamation of Great Britain and France. As a result of the United States’ recognition of Hawaiian independence, the Hawaiian Kingdom entered into a Treaty of Friendship, Commerce and Navigation, Dec. 20th 1849 (9 U.S. Stat. 977); Treaty of Commercial Reciprocity, Jan. 13th 1875 (19 U.S. Stat. 625); Postal Convention Concerning Money Orders, Sep. 11th 1883 (23 U.S. Stat. 736); and a Supplementary Convention to the 1875 Treaty of Commercial Reciprocity, Dec. 6th 1884 (25 U.S. Stat. 1399).

Unable to procure a treaty of cession from the Hawaiian Kingdom government acquiring the Hawaiian Islands as required by international law, Congress enacted a Joint Resolution To provide for annexing the Hawaiian Islands to the United States, which was signed into law by President McKinley on July 7, 1898 during the Spanish-American War (30 U.S. Stat. 750) as a war measure. Congressional laws have no extraterritorial effect and are confined to United States territory.

The Hawaiian Kingdom came under military occupation on August 12, 1898 at the height of the Spanish-American War in order to reinforce and supply troops that have been occupying the Spanish colonies of Guam and the Philippines since May 1, 1898. Following the close of the Spanish-American War by the Treaty of Paris signed December 10, 1898 (30 U.S. Stat. 1754), U.S. troops remained in the Hawaiian Islands and continued its occupation to date in violation of international law.

In an evidentiary ruling in State of Hawai‘i v. English (CR 14-1-0820) on March 5, 2015, where I served as defense counsel, the State of Hawai‘i Circuit Court took judicial notice of adjudicative facts that concluded the Hawaiian Kingdom continues to exist as a State under international law, despite the illegal overthrow of its government by the United States of America on January 17, 1893 and the prolonged occupation since August 12, 1898. This ruling reaffirms the illegitimacy of the State of Hawai‘i and therefore its claim to be a de jure government is unfounded. State of Hawai‘i officials are also named in a pending criminal investigation for war crimes that is currently before the Swiss Federal Criminal Court Appeals Chamber under Gumapac, et al., vs. Office of the Federal Attorney General, reference no. BB.2015.36-37. A Hawaiian subject filed the first war crime complaint with the Swiss Attorney General on December 22, 2015 [2014],  and a Swiss citizen filed the second complaint on January 21, 2015. Both complaints allege State of Hawai‘i officials committed war crimes of unfair trial, pillaging, and unlawful appropriation of property.

Therefore, the proposed University of Hawai‘i sublease to TMT International Observatory, LLC, would also be considered null and void.

The funders for the construction of the 30-meter telescope who are not the principal partners are accomplices to the principal partners’ war crime of destruction of an occupied State’s property. On April 6, 2015, Canadian Prime Minister Stephen Harper announced the Canadian government’s intent to provide nearly $250 million dollars over the next decade to assist in the destruction. The Canadian government’s involvement would be a war crime as defined under Article 6(3) of Canada’s Crimes Against Humanity and War Crimes Act (2000), which is similar to Switzerland’s legislation implementing the International Criminal Court Rome Statute into the Swiss Criminal Code in 2010. I will be providing a copy of this cease and desist to the Canadian Department of Justice, Crimes Against Humanity and War Crimes Section.

Thank you for your anticipated cooperation.

14 thoughts on “War Crimes: TMT Told to Cease and Desist”