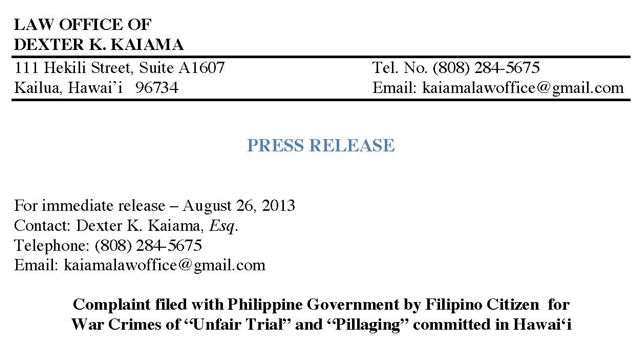 When Mrs. Pilapil, also known as Maria Alma Barbaso Schwartz, wife of Stephen Michael Schwartz, a U.S. citizen, took out a loan from Bank of Hawai‘i with her husband, Bank of Hawai‘i required the Schwartz’s to purchase a title insurance policy in the amount of the money borrowed, which was $1,499,999.00. The Schwartz’s paid a premium of $3,735.00 to Title Guaranty of Hawai‘i. Title insurance insures the accuracy of the title search done by Title Guaranty of Hawai‘i, and if the search is inaccurate and the title to the property is defective, the insurance pays off the balance of the loan. Evidence of a defect in title produced by Laulima Title Search and Claims, LLC, was provided to Bank of Hawai‘i, but it was willfully disregarded and the foreclosure proceedings continued.

A motion to dismiss was filed during the foreclosure proceedings based on evidence that the court is unlawful, under both international law and United States constitutional law, as a result of the United States illegal overthrow of the Hawaiian Kingdom government on January 17, 1893, and its prolonged and illegal occupation since the Spanish-American War in 1898. Mitzi Lee, attorney for Bank of Hawai‘i, provided no rebuttal evidence, and, without cause, Judge Ronald Ibarra denied the motion. This action constituted an “unfair trial” and a criminal complaint was filed with the Hawai‘i Police Department and the International Criminal Court. On June 29, 2013, Bank of Hawai‘i “pillaged” my clients’ property with the assistance of Lieutenant Kawai of the State of Hawai‘i Sheriff’s Department. The eviction was based on an unlawful order stemming from a court that did not have lawful authority in the Hawaiian Islands. My clients’ possession was valued at $2.2 million dollars.

In 2009, the Congress of the Philippines enacted the Philippine Act on Crimes Against International Humanitarian Law, Genocide, and Other Crimes Against Humanity. In this Act the “State shall exercise jurisdiction over persons, whether military or civilian, suspected or accused of a crime defined and penalized in this Act, regardless of where the crime is committed, provided…the accused has committed the said crime against a Filipino citizen.” The war crimes of “unfair trial” and “pillaging” are punishable offenses under the Act, and since the alleged crimes were committed outside of Philippine territory the alleged perpetrators are subject to extradition to the Philippines under the 1994 U.S.-Philippines Extradition Treaty (1994 U.S.T. Lexis 185). According to the Act:

“The most serious crimes of concern to the international community as a whole must not go unpunished and their effective prosecution must be ensured by taking measures at the national level, in order to put an end to impunity for the perpetrators of these crimes and thus contribute to the prevention of such crimes, it being the duty of every State to exercise its criminal jurisdiction over those responsible for international crimes.”

Once the warrant for war crime(s) have been charged, my client demands the alleged perpetrators be extradited to the Philippines for prosecution to the full extent of the law.

14 thoughts on “OHA Trustee Apoliona, among Others, Reported for War Crimes by Filipino Citizen”