King Kalakaua was introduced to Mr. Thomas A. Edison at the latter’s headquarters, in Fifth avenue, at 9 o’clock last night. Mr. George Jones, the proprietor of the Times, met his Majesty in Vienna, and when the conversation turned upon the electric light, Mr. Jones promised to introduce the King to the electrician when met in New York. At 9 o’clock Mr. Edison was in an upper room at work. A half dozen friends and assistants were with him. The electric lights were burning throughout the building. A carriage rumbled up to the curb, and in an instant the King, Mr. Jones, Attorney General Armstrong, and one or two other entered. They were shown into a rear room, and as they stood there, looking at the chandelier, Edison came in. His hair was tousled in every direction. As he entered he ran his hand nervously through his hair, as if conscious that it was discorded, and thus made it worse. Mr. Jones introduced him to the King, and he nodded rather than bowed, at the same time extending one hand absent-mindedly, first at Mr. Jones and then at the monarch, who took it, and looked smilingly into the boyish face of the inventor.

“I have heard about you, Mr. Edison,” said his Majesty, “and I have wished to see you and your wonderful inventions.”

The King has gained a decidedly English intonation since his last visit, and the melodious voice that he possesses, in common with the people of his kingdom, renders that intonation more than usually agreeable. He was dressed in black, relieved only by his white collar, the horseshoe of brilliant diamonds on his scarf, and his white cuffs. 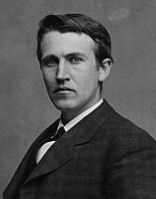 Edison exhibited his light, turning one burner up and down, and then putting all out at once and instantly relighting them. The King was interested. Attorney-General Armstrong says that his Majesty is especially interested in the electric light, because his capital, Honolulu, must be lighted soon by something superior to the kerosene now employed there. The monarch is undecided whether the new illuminator shall be gas or electricity, but has resolved to wait until electricity has had a full and practical trial. The King saw Edison’s representative in Paris and learned much from him. Last night there was an awkward pause after the King had complimented Edison and Edison had nodded back his thanks. Everybody felt a little uncomfortable. The King broke the spell by suddenly asking: “How do you produce those carbon arcs?”

Instantly the electrician was at home, and he launched out into a description of his lamp, couched in homely language, and illustrated with bits of wire and portions of his apparatus. He and the King were left together, and the others stood apart. Presently some ladies came in softly, and, getting behind the others, saw royalty deferring to genius. Edison was so interested that he occasionally left the King’s side to correct what he heard others saying, and once he left his Majesty all alone, holding a picture and not knowing what to do with it. The King is a good listener and appeared to be interested. He asked practical and sensible questions. He was astonished to hear that Edison was going to sell power as well as light. He said he had not heard of that before. He was amazed at Edison’s maps of the business districts, peppered all over with dots, each of which represented a gas burner wherever there is a gas burner, and at other maps covered with parallelograms of varying sizes, representing the amount of horse power in use in the same localities.

“Can you lay your wires in submarine cables?” Attorney-General Armstrong asked.

“Well, it would cost so much, that’s all,” Edison replied.

“Because you might come over to the Sandwich Islands,” the King’s advisor said, “where we have a volcano that burns a thousand million tons of coal a day, and you could put your boilers on top of the volcano and get power enough to supply the country.”

“Is that where you get your coal?” Edison asked, overlooking the joke in his thirst for information.

“No; we get our coal from Australia,” said the Attorney-General,” but we build great hopes on that volcano. When we sell out we expect to get more for that than for anything we have got.”

At this the King laughed heartily. He went through the building with Edison and watched the inventor with unaffected curiosity. He was astonished to hear that the carbon horseshoes gradually became so hard by burning that they will cut glass like a diamond. The King suggested that this information would be prized by the ladies. Up stairs, where there is a burner over a compositor’s type case, the King was show a book to illustrate the steadiness and gentleness of the light. The conversation turned upon the Hawaiian language, which the Attorney-General told Edison was extremely soft and musical. Edison said he should like to hear it, and the King was prevailed upon to say something in Hawaiian. The King proved bashful. He hesitated a moment,

“The language is full of the vowel sound,” said Gen. Armstrong, “It has only thirteen letters.”

“Twelve,” said Gen. Armstrong: “all the vowels and a few consonants.”

The King went with Edison down stairs to the engine room, and Edison showed him the dynamo machine and motor. After that the King thanked the inventor, said he had been greatly interested, shook hands with him, and, with Mr. Jones and the others, quitted the building.

In the morning the King and Lord High Chamberlain Judd had been to Irvington, where they spent the day with Mr. Mason, an old resident of the Sandwich Islands. They returned to the city in the evening. The King has received many calls at the Brunswick. The visitors have been mainly persons who have been in the Sandwich Islands or people whom he met on his travels. He has declined a number of social invitations out of respect to the national distress.