Pūnana Leo o Kona, a Hawaiian Medium Education preschool and Keauhou Shopping Center present the Second Annual ʻAha Aloha ʻŌlelo, a free family event on Saturday March 14, 2014 from 9:00am to 4:00pm at the Keauhou Shopping Center (center courtyard area).  This yearʻs free event offers a Hawaiian language competition among Hawaii Island residents and schools as well as a lineup of great Hawaiian music featuring Jon and Jamaica Osorio, Kalani Peʻa, Bulla Kaʻiliwai and Hāwane Rios.  There will be food booths, a Keiki Land that includes bouncers, slides, a petting zoo, games and much more as well as an awesome lineup of vendors, including Wahine Toa and Living Hula.

The Hawaiian Language Competition, themed “Ma Hope Mākou o Liliʻulani”, will feature students and residents of Hawaiʻi Island giving speeches in Hawaiian language based in the time of Queen Liliʻuokalani.  Students will be “tasked” with taking the 38,000 signatures gathered in 1897 by Hawaiian patriots, such as James Kaulia, David Kalauokalani, Abigail Campbell and Emma Nāwahī, and deliver them to the United States Government and present their own testimony as to why Queen Liliʻuokalani should be restored to the throne.  Students will also present memorized speeches of Kamehameha as well as the aforementioned Kaulia and Queen Liliʻuokalani.  The competition will also feature a singing portion where students will sing songs either composed by or for Queen Liliʻuokalani or a song that honors her, as well as a chant and dance portion where they will present an oli and hula of their land.

Prior to 1822, Hawaiian language was only an oral language, having no form or system of writing and reading.  Traditions and information was stored in memory and passed down from generation to generation, through stories, songs and chants.  In 1822, however, a system of writing for Hawaiian language was created and by 1840, Hawaiʻi was nearly universally literate, with a literacy rate of 97%, making Hawaiʻi the most literate country in the world when it was recognized as a sovereign and independent country by France and Great Britain through the signing of the Anglo-Franco Proclamation on November 28, 1843 at the Court of London.  Hawaiʻi had maintained this amazing and incredible literacy rate until not too long after the illegal overthrow of Queen Liliʻuokalani in 1893.  After the illegal and provisional government took over, they began to institute many forms of denationalization and Americanization of Hawaiians.  One of the many settings that this took place in was the educational system.  In 1896, the provisional government banned the use of Hawaiian language in all public schools and many, many students were punished, physically, for speaking Hawaiian in schools.  This began the decline in literacy among Hawaiians as well as caused the Hawaiian language to nearly go extinct.

In 1897, the provisional government attempted, again, to annex the Kingdom of Hawaiʻi to America, but President McKinley was unable to garner enough votes from the Senate to pass a Treaty of Annexation.  This was in large part due to the 38,000 signatures gathered by the Hawaiian patriots listed above.  It is important to note, too, though, that Queen Liliʻuokalani wrote her own letter of protest to President McKinley in 1897 that has come to be termed the “Red Ribbon Letter”.  Due to their inability to get enough votes for a treaty, in 1898 Congress passed a Joint Resolution, claiming to annex Hawaiʻi to America.  A Joint Resolution, though, is merely a domestic law that holds no authority outside the boundaries of its governing territory and therefore has no ability to annex an independent and foreign country, meaning that to this day, Hawaiʻi remains an independent country under a prolonged and illegal military occupation by the United States of America.  This yearʻs ʻAha Aloha ʻŌlelo aims to bring awareness to this point in Hawaiian history and its ramifications that continue to be felt today.

Pūnana Leo o Kona is the only Hawaiian Medium Education pre-school in Kona, Hawaiʻi.  Established in 1994, Pūnana Leo o Kona just celebrated itʻs 20th anniversary last year.  Pūnana Leo o Kona is one of 11 preschools operated throughout five islands by ʻAha Pūnana Leo, a non-profit 501©3 organization founded in 1982 to revitalize what was then a dying and nearly extinct language.  In 1982, it was estimated that less than 50 people under the age of 18 were able to fluently speak Hawaiian.  Today, the Hawaiian language continues to grow and expand as ʻAPL has graduated 4,255 families since 1984 including 237 in Kona since 1994.  Today there is an estimated 8,000 fluent Hawaiian language speakers. 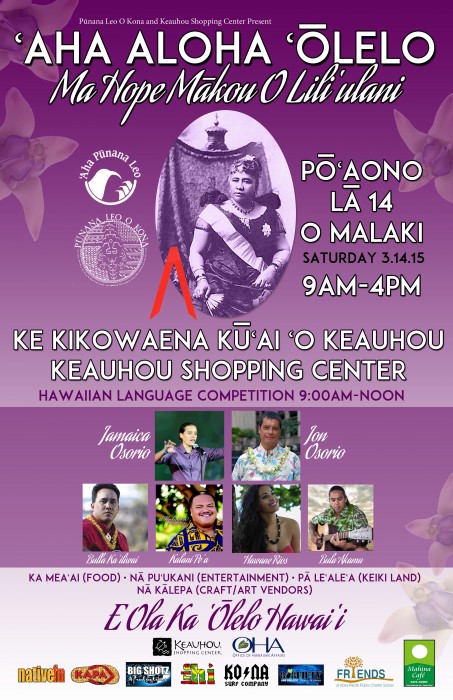