International law provides an appropriate lens to the political and legal history of the Hawaiian Islands, which has been relegated under U.S. sovereignty and the right to internal self-determination of indigenous peoples. There are inherent contradictions and divergence of thought and direction between the concepts of Hawaiian State sovereignty and Hawaiian indigeneity.

On January 18, 2001, the U.S. National Security Council made known its position on indigenous peoples to its delegations assigned to the “U.N. Commission on Human Rights,” the “Commission’s Working Group on the United Nations (UN) Draft Declaration on Indigenous Rights,” and to the “Organization of American States (OAS) Working Group to Prepare the Proposed American Declaration on the Rights of Indigenous Populations.” The Council directed these delegates to “read a prepared statement that expresses the U.S. understanding of the term internal ‘self-determination’ and indicates that it does not include a right of independence or permanent sovereignty over natural resources.”

The Council also directed these delegates to support the use of the term internal self determination in both the U.N. and O.A.S. declarations on indigenous rights, and defined Indigenous Peoples as having “a right of internal self-determination.” By virtue of that right, “they may negotiate their political status within the framework of the existing nation-state and are free to pursue their economic, social, and cultural development. This resolution sought to constrain the growing political movement of indigenous peoples “who aspire to rule their territorial homeland, or who claim the right to independent statehood under the doctrine of self-determination of peoples.”

The legal definition of a colony is “a dependent political economy, consisting of a number of citizens of the same country who have emigrated therefrom to people another, and remain subject to the mother country.” According to Albert Keller, a colonial studies scholar, colonization is “a movement of population and an extension of political power,” and therefore must be distinguished from migration.

Colonization is an extension of sovereignty over territory not subject to the sovereignty of another State, while migration is the mode of entry into the territory of another sovereign State. The “so-called ‘interior colonization’ of the Germans [within a non-German State] would naturally be a misnomer on the basis of the definition suggested.” This would suggest that the migration of United States citizens into the territory of the Hawaiian Kingdom constituted American colonization and somehow resulted in the creation of an American colony.

The history of the Hawaiian Kingdom has fallen victim to the misuse of this term by contemporary scholars in the fields of post-colonial and cultural studies. These scholars have lost sight of the original use and application of the terms colony and colonization, and have remained steadfast in their conclusion that the American presence in the Hawaiian Islands was and is currently colonial in nature. This erroneous use of the word has caused much confusion and complicates agreement on legal and political solutions.

Slavoj Zizek, a philosophy scholar, critically suggests that in post-colonial studies, the use of the term colonization “starts to function as a hegemonic notion and is elevated to a universal paradigm, so that in relations between the sexes, the male sex colonizes the female sex, the upper classes colonize the lower classes, and so on.” He argues that in cultural studies it “effectively functions as a kind of ersatz-philosophy, and notions are thus transformed into ideological universals.

In the legal and political realm, the fundamental difference between the terms colonization/de-colonization and occupation/de-occupation, is that the colonized must negotiate with the colonizer in order to acquire state sovereignty, e.g. India from Great Britain, Rwanda from Belgium, and Indonesia from the Dutch. Under the latter, State sovereignty is presumed and not dependent on the will of the occupier, e.g. Soviet occupation of the Baltic States, and the American occupation of Afghanistan and Iraq. Colonization/de-colonization is a matter that concerns the internal laws of the colonizing State and presumes the colony is not sovereign, while occupation/de-occupation is a matter of international law relating to already existing sovereign States. Matthew Craven an international law scholar who has done extensive research on the continuity of the Hawaiian State, concludes:

“For the Hawaiian sovereignty movement, therefore, acceding to their identification as an indigenous people would be to implicitly accede not only to the reality, but also to the legitimacy, of occupation and political marginalization. All they might hope for at that level is formal recognition of their vulnerability and continued political marginalization rather than the status accorded under international law to a nation belligerently occupied.”

Hawaiian State sovereignty and the international laws of occupation not only presume the continuity of Hawaiian sovereignty, but also provide the legal framework for regulating the occupier, despite its history of non-compliance. It is clear that the U.S. government wrongfully administered the Hawaiian Islands since 1898 as if it were a colonial possession for the purpose of concealing a gross violation of international law. Therefore, colonialism must be viewed as a tool used by the occupant to commit fraud in an attempt to extinguish the memory of sovereignty and the legal order of the occupied State.

Self-determination, inherent sovereignty and indigenous peoples are terms fundamentally linked not just to the concept, but to the political and legal process of de-colonization, which presupposes sovereignty to be an aspiration and not a legal reality. The effects of colonization have affected the psychological and physiological make-up of many native Hawaiians, but these effects must be reinterpreted through the lens of international law. Colonial treatment is the evidence of the violation of the law, not the political basis of a sovereignty movement. As such, these violations should serve as the measurement for reparations and compensation to a people who, against all odds, fought and continue to fight to maintain their dignity, health, language and culture, and above all, their rightful and lawful sovereign status. 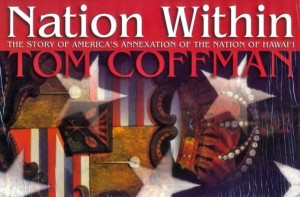 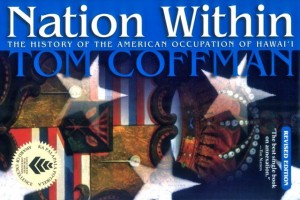 Within by Coffman was published with a significant change in its subtitle. In the original version published in 1998, the subtitle reads “The Story of America’s Annexation of the Nation of Hawai‘i,” but the revised edition now reads “The History of the American Occupation of Hawai‘i.” Coffman explains:

“In the book’s subtitle, the word Annexation has been replaced by the word Occupation, referring to America’s occupation of Hawai‘i. Where annexation connotes legality by mutual agreement, the act was not mutual and therefore not legal. Since by definition of international law there was no annexation, we are left then with the word occupation. In making this change, I have embraced the logical conclusion of my research into the events of 1893 to 1898 in Honolulu and Washington, D.C. I am prompted to take this step by a growing body of historical work by a new generation of Native Hawaiian scholars. Dr. Keanu Sai writes, ‘The challenge for…for the fields of political science, history, and law is to distinguish between the rule of law and the politics of power.’ In the history of Hawai‘i, the might of the United States does not make it right.”

16 thoughts on “Hawai‘i: The Difference Between Occupation and Colonization”