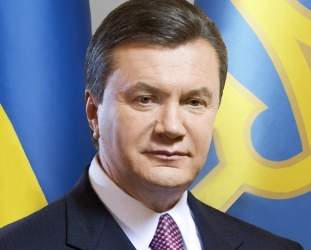 Putting aside the violence that has caused injuries and death in Ukraine on both the government and protesters side, what does the law say regarding the removal of Ukraine’s President Victor Yanukovych by vote of the Ukrainian Parliament (Rada). In The Daily Beast article “How Ukraine’s Parliament Brought Down Yanukovych,” there was no mention of Ukrainian law, except for legislation passed by the Rada. The Daily Beast reported, “after Yanukovych refused to leave office, the Ukrainian parliament by an overwhelming majority voted to remove him from the post as the one who ‘has dissociated himself’ by fleeing the capital. The ballot was passed with a constitutional majority and entered into force immediately.”

President Obama calls the new government legitimate, but President Putin calls it illegitimate. According to Article 108 of the Ukrainian Constitution, “The authority of the President of Ukraine shall be subject to an early termination in cases of: (1) resignation; (2) inability to exercise presidential authority for health reasons; (3) removal from office by the procedure of impeachment; (4) his/her death.” Since Yanukovych didn’t resign and he had no health issues, the only way to remove him would be “by the procedure of impeachment.” The quintessential question is whether a vote of removal by the Rada constituted impeachment. If it was then Yanukovych is no longer President, but if not then the Rada vote was unconstitutional and Yanukovych is still President even while he is in Russia.

By definition, impeachment is not removal, but rather a process initiated by a legislative body in order to remove a President. Impeachment is similar to an indictment, which precedes a trial. Under the United States Constitution this two-step process begins when the House of Representatives votes for articles of impeachment by a majority of

those Representatives present, which provides the allegations of “treason, bribery, or other high crimes and misdemeanors.” If the articles of impeachment pass, the President is considered impeached. What follows is for the Senate to hold a trial, which is presided over by the Chief Justice of the U.S. Supreme Court. In 1999, President Bill Clinton was impeached, but was found not guilty in the Senate trial.

The Ukrainian Constitution provides for the process of impeaching its President.

“Article 111. The President of Ukraine may be removed from the office by the Verkhovna Rada of Ukraine in compliance with a procedure of impeachment if he commits treason or other crime.

The issue of the removal of the President of Ukraine from the office in compliance with a procedure of impeachment shall be initiated by the majority of the constitutional membership of the Verkhovna Rada of Ukraine.

The Verkhovna Rada of Ukraine shall establish a special ad hoc investigating commission, composed of special prosecutor and special investigators to conduct an investigation.

The conclusions and proposals of the ad hoc investigating commission shall be considered at the meeting of the Verkhovna Rada of Ukraine.

On the ground of evidence, the Verkhovna Rada of Ukraine shall, by at least two-thirds of its constitutional membership, adopt a decision to bring charges against the President of Ukraine.

The decision on the removal of the President of Ukraine from the office in compliance with the procedure of impeachment shall be adopted by the Verkhovna Rada of Ukraine by at least three-quarters of its constitutional membership upon a review of the case by the Constitutional Court of Ukraine, and receipt of its opinion on the observance of the constitutional procedure of investigation and consideration of the case of impeachment, and upon a receipt of the opinion of the Supreme Court of Ukraine to the effect that the acts, of which the President of Ukraine is accused, contain elements of treason or other crime.”

unconstitutional, which is what Russia has been stating. Russia

also has stated that Yanukovych’s removal was supported by the United States, especially after a phone conversation between assistant U.S. Secretary of State Victoria Nuland and U.S. Ambassador to Ukraine, Geoffrey Pyatt, was leaked to the media. On February 7, 2014, The Guardian reported on the phone conversation and played the audio.

The leading case in the United States on the definition of “natural-born” is the 1898 U.S. Supreme Court’s decision in U.S. v. Wong Kim Ark, 169 U.S. 649. In that case, the Court confirmed that Wong Kim Ark, a child of Chinese nationals born in the city of San Francisco, was a natural-born United States citizen. The Court’s reasoning was that since the term “natural-born” was specifically used in the United States Constitution, which was written in 1787, English common law was to be used in its interpretation of natural-born. The Court explained, “The interpretation of the Constitution of the United States is necessarily influenced by the fact that its provisions are framed in the language of the English common law, and are to be read in the light of its history.”

The Court further explained, “The fundamental principle of the common law with regard to English nationality was birth within the allegiance, also called ‘ligealty,’ ‘obedience,’ ‘faith,’ or ‘power’ of the King. The principle embraced all persons born within the King’s allegiance and subject to his protection. Such allegiance and protection were mutual — as expressed in the maxim protectio trahit subjectionem, et subjectio protectionem — and were not restricted to natural-born subjects and naturalized subjects, or to those who had taken an oath of allegiance, but were predicable of aliens in amity so long as they were within the kingdom. Children, born in England, of such aliens were therefore natural-born subjects. But the children, born within the realm, of foreign ambassadors, or the children of alien enemies, born during and within their hostile occupation of part of the King’s dominions, were not natural-born subjects because not born within the allegiance, the obedience, or the power, or, as would be said at this day, within the jurisdiction, of the King.”

Two of the Judges, however, dissented with the judgment on racial grounds, but they also allude to what it meant to children born abroad of U.S. parents. Both judges stated, “Considering the circumstances surrounding the framing of the Constitution, I submit that it is unreasonable to conclude that ‘natural-born citizen’ applied to everybody born within the geographical tract known as the United States, …while children of our citizens, born abroad, were not.” 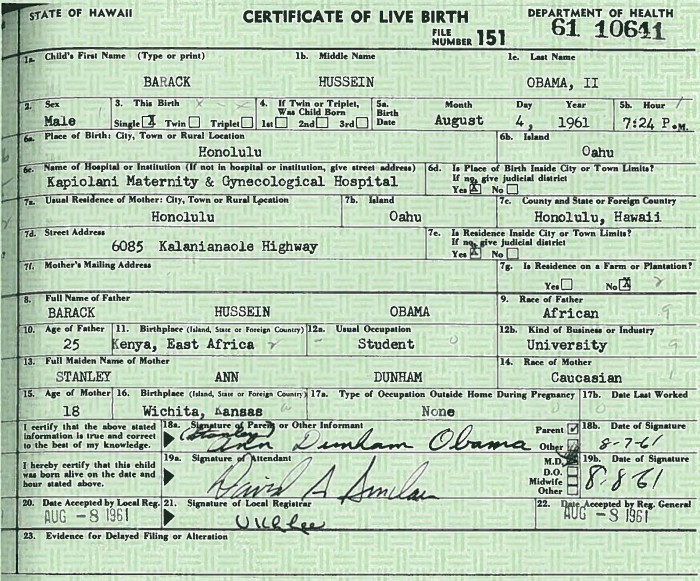 Since the Hawaiian Kingdom has been under an illegal and prolonged occupation by the United States and its continuity is protected under international law, Obama cannot claim to be a natural-born citizen of the United States and, therefore, cannot meet the constitutional requirement to be a President of the United States. But he is a U.S. citizen through parentage (jus sanguinis) because his mother was a U.S. citizen when she gave birth to Obama in the Hawaiian Kingdom. He cannot, however, claim Hawaiian citizenship by birth because the international law of occupation, which protects and maintains the status quo of the occupied State, only allows Hawaiian citizenship through parentage and not natural-born even though it is a recognized mode of acquiring citizenship under Hawaiian Kingdom law.