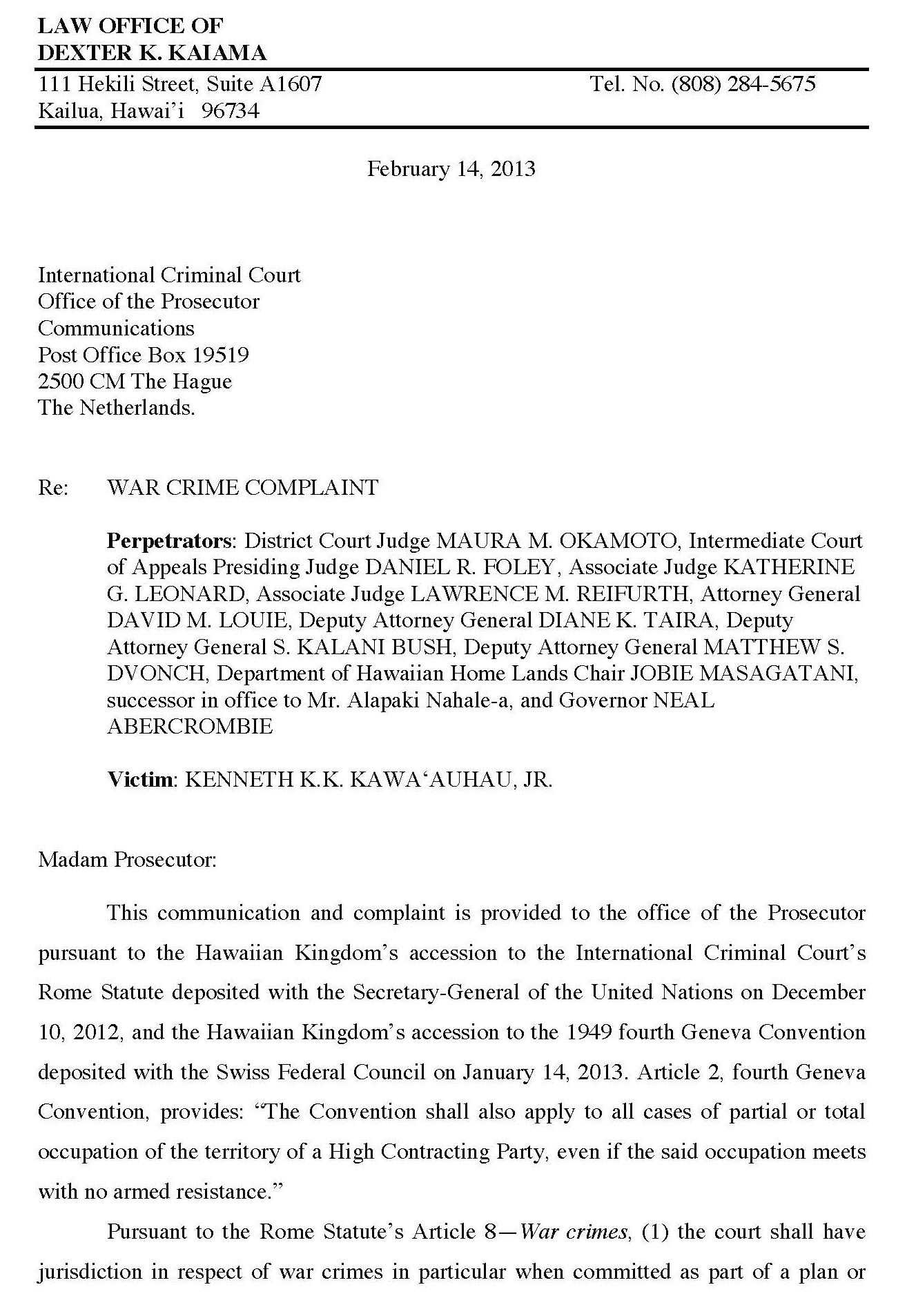 The first war crime complaint was filed on February 14, 2012, with the Prosecutor of the International Criminal Court (ICC) and copied to the United Nations Human Rights Commission by Dexter Kaiama, attorney, on behalf of his client Kenneth K.K. Kawa‘auhau. Kawa‘auhau is a Hawaiian subject and a protected person under the 1949 Fourth Geneva Convention. The specific war crime is denying a protected person a fair and regular trial. According to the ICC, elements of the war crime of denying a fair trial include:

The ICC also clarifies that with respect to the last two elements listed for the war crime of denying a fair trial:

In 2012, ejectment proceedings were instituted by the State of Hawai‘i Attorney General against Kawa‘auhau seeking a court order from the District Court of the First Circuit, Waianae Division, to remove him from his home in Waianae. Kawa‘auhau held a 99-year lease from the Department of Hawaiian Home Lands. On January 24, 2012, Kawa‘auhau filed a Motion to Dismiss on the grounds that the District Court was not lawfully constituted because the United States has been illegally occupying the Hawaiian Kingdom in violation of the 1893 Lili`uokalani assignment and the Restoration Agreement, being international compacts, the 1907 Hague Convention, IV, and international law. Kaiama provided special appearance for Kawa‘auhau at the hearing on the motion that was held on February 7, 2012.

According to Kawa‘auhau’s pleadings in the case, his argument and supporting evidence centered on the fact that there is no treaty between Hawai‘i and the United States, and without a treaty United States laws enacted by the Congress have no force and effect beyond U.S. territory. As a result, the District Court, which derives its authority from An Act To provide for the admission of the State of Hawai‘i into the Union (March 18, 1959), cannot claim to have jurisdiction in territory that does not belong to the United States. Kawa‘auhau argues that the Hawaiian Kingdom continues to exist and that international laws, not U.S. laws, apply in his situation.

Despite Kaiama getting District Court Judge Maura Okamoto to take judicial notice of the evidence, she denied the motion to dismiss without cause and the court eventually granted the order for eviction. Kawa‘auhau’s appeal with the Intermediate Court of Appeals was also denied by Presiding Judge Daniel Foley, Associate Judge Katherine Leonard and Associate Judge Lawrence Reifurth without any counter-evidence as well. (United States) State of Hawai‘i Government is a War Crime under International Law.

“Accordingly, pursuant to Article 17(3) of the Rome Statute, I respectfully request the office of the Prosecutor, with all due speed, investigate the situation in order to determine if the alleged perpetrators should be charged with the war crime specified above.”

The ICC jurisdiction over the Hawaiian Islands will begin March 4, 2013.