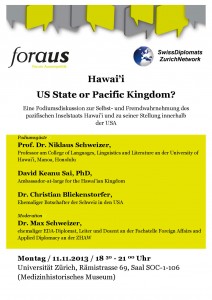 The Swiss Diplomats – Zurich Network has invited Dr. Keanu Sai to the city of Zurich to give a presentation on the prolonged and illegal occupation of the Hawaiian Kingdom. The title of Dr. Sai’s presentation is “Hawai‘i – An American State or a State Under American Occupation.” Professor Niklaus Schweizer, a former Swiss Consul for Hawai‘i and a professor at the University of Hawai‘i at Manoa, will be giving the introduction. After the presentation there will be a panel discussion comprised of Dr. Sai, Professor Schweizer, and former Swiss Ambassador to the United States and Germany, Dr. Christian Blickenstorfer. The presentation and panel is scheduled for Monday, November 11, 2013.

On July 20, 1864, the Hawaiian Kingdom entered into a Treaty of Friendship, Establishment and Commerce with Switzerland that established perpetual peace and reciprocal liberties. Article 1 states: “Hawaiians shall be received and treated in every canton of the Swiss Confederation, as regards their persons and their properties, on the same footing and in the same manner as now are or may hereafter be treated, the citizens of other cantons. The Swiss shall enjoy in the Hawaiian Islands all the same rights as Hawaiians in Switzerland.” The treaty was negotiated on behalf of the Hawaiian Kingdom by Sir John Bowring, who was a Knight Bachelor of Great Britain and Commander of the Order of Leopold of Belgium. The Hawaiian-Swiss Treaty has not been terminated by either the Hawaiian Kingdom or the Swiss Confederation.