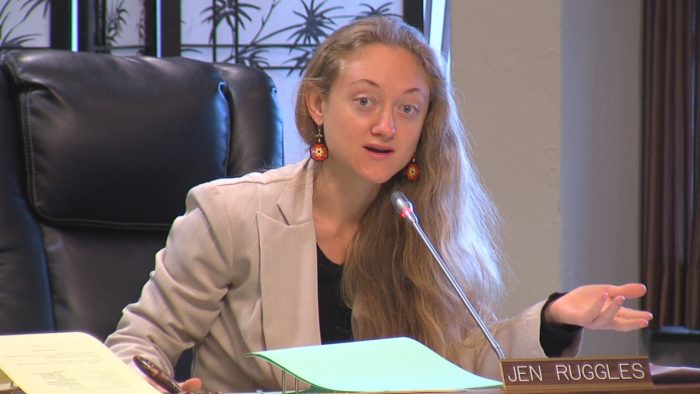 Council member Jen Ruggles released a letter today that she had sent to Governor Ige, every mayor, and every county taxation department in the State of Hawai‘i regarding “War crimes of pillaging committed against Protected Persons by the State of Hawai‘i and its Four Counties.”

The letter begins by stating, “To my dismay, I have become aware of Hawai‘i’s status as a nation-state, under international law, which has been under an illegal occupation by the United States since it, by its own admission, illegally overthrew the Hawaiian Kingdom government on January 17, 1893.” Referring to President Cleveland’s 1893 address to the U.S. Congress where he declared U.S. had committed “an act of war” against the Hawaiian Kingdom, she writes, “these acts of war created a state of war between itself and the Hawaiian Kingdom…International law bound, and still binds, the United States to adhere to the law of occupation.”

Ruggles also referred to the United Nations Human Rights Office of the High Commissioner, Dr. Alfred de Zayas’ memorandum sent to Hawaii State judges this past February which stated Hawai‘i was “under a strange form of occupation by the United States resulting from an illegal military occupation and a fraudulent annexation.”

“After reading Dr. de Zayas’s memorandum,” Ruggles wrote, “I attempted to verify his claim of ‘a fraudulent annexation.’ It became apparent to me that there is no clear U.S. constitutional basis for the enforcement of United States law on Hawaiian Kingdom territory…As a Council member, I have come to understand that legislation is limited to the territorial jurisdiction of the law-making body. The U.S. Congress has no constitutional authority, nor any authority under international law, to unilaterally annex a foreign country by a joint resolution.”

Ruggles also noted that according to international law definitions, what is called the “State of Hawai‘i” is, in fact, an “organized armed force.” “The State of Hawai‘i cannot, therefore claim to be a lawful government because its only claim to authority derives from U.S. congressional legislation that has no extraterritorial effect,” Ruggles wrote,  “The ‘State of Hawai‘i’ meets the jus in bello—the laws of war definition of an organized armed group acting for and on behalf of the United States within the territory of the Hawaiian Kingdom.”

According to Ruggles, because there is no evidence that Hawaii was ever legally made apart of the United States, the laws of occupation apply. These laws would include the Hague and Geneva Conventions, which are U.S. ratified treaties. According to Title 18, section 2441 of the United States Code, any breach to these treaties constitute “war crimes.”

Article 64 of the 1949 Geneva Convention mandates that the laws of the occupied territory must remain in force. Ruggles says these laws include the 1882 Hawaiian Kingdom Act To Consolidate and Amend the Law Relating to Internal Taxes which consists of poll, school, dog, horse, mule, road, and real and personal property taxes. Ruggles asserts that the State of Hawaii and the four counties collection of money from protected persons is a form of pillaging.

Black’s Law dictionary defines plunder as to “pillage or loot. To take property from persons or places by open force, and this may be in course of war…The term is also used to express the idea of taking property from a person or place, without just right.” The U.S. ratified Hague and Geneva Conventions specifically prohibit pillaging.

“This letter serves to give you both knowledge, and ‘awareness of the factual circumstances that established the existence of an armed conflict’ between the Hawaiian Kingdom and the United States, the application of the HCIV and GCIV, and the protection afforded aboriginal Hawaiians as protected persons,” Ruggles wrote, “Therefore, you must cease and desist from committing these war crimes unless the State of Hawai‘i transforms itself into a Military Government recognizable under international law”

Council member Ruggles concluded the letter with an excerpt from a report Dr. Keanu Sai had provided Governor Ige’s Chief of Staff, Mike McCartney in 2015 titled “Report on Military Government.” According to the report, the State of Hawaii is obligated to comply with U.S. Army Field Manual FM 27-5 and establish a military government to work with the acting Hawaiian Kingdom Government to provisionally serve as the administrator of the laws of the Hawaiian Kingdom.

During Ruggles’ October Town Hall she explained how she is doing her job “as mandated by her oath to uphold the U.S. Constitution that says treaties are the supreme law of the land through putting every agent of the United States in Hawaii concerning the rights of protected persons on notice for violations of the Hague and Geneva Conventions.”