KAILUA, O‘AHU, May 13, 2013—I wish to correct errors and misinformation reported in the article of May 9, 2013 in the Tribune Herald Newspaper titled “Officials deny ‘war crimes’ investigation.” My clients are victims of felonies and it is my responsibility to advocate and protect their lawful rights and to ensure that the perpetrators are brought to justice.

The assignment of the criminal complaint numbers by the Hawai‘i Police Department contradict (or at least clarifies) Assistant Police Chief Marshall Kanehailua’s reported statement to the Tribune Herald “that the department received information about the alleged crimes and forwarded the material to the FBI without investigation.”

Additionally, information and communications between Detective Derek Morimoto, Criminal Investigation Division, Area 1, Hawaii Police Department, myself and the victims directly contradict Assistant Chief Kanehailua’s statement that “we are not investigating judges on the Big Island.” Detective Morimoto was explicit with my clients and myself that he was the investigating officer from the Criminal Investigation Section for the alleged war crime felonies committed by the judges.

The Tribune Herald’s article reporting of Assistant Chief Kanehailua’s disclosure that routing (of the criminal complaints) was made to the FBI was significant.  The Hawai‘i Police Department’s disclosed routing, though improperly referred to the FBI, affirms the existence and ongoing investigation into these serious charges.  My May 7, 2013 press release informs that completion of the investigation and prosecution of the perpetrators of war crimes outside the United States, under 18 USC Sec. 2441, is lawfully with the U.S. Pacific Command and not with the FBI. The FBI is limited in its exercise of authority to territory of the United States and not on foreign territory unless it receives consent by the foreign government of that territory.

The Tribune Herald’s article evidences a lack of knowledge about this serious issue, a failure to complete an in-depth journalistic investigation and an irresponsibility to properly inform the public.

Existing treaties and historical records, supported by U.S. Congressional enactment, affirms the illegal overthrow of the government of the Hawaiian Kingdom.  The Tribune Herald’s inference that the illegal overthrow may not have occurred indicates either an ignorance of or irresponsibility to truthful journalism.

On March 4, 2013 the Head of the Information and Evidence Unit, Office of the Prosecutor of the International Criminal Court (ICC), The Hague, Netherlands, acknowledged receipt of the war crime complaints filed on behalf of my clients. The ICC’s acknowledgment signifies its recognition of Hawai‘i as an independent state as well as its jurisdiction to investigate and prosecute these criminal complaints.  A copy of the ICC’s March 4, 2013 acknowledgment, written in both English and French, has been provided to the Tribune Herald and the news media. 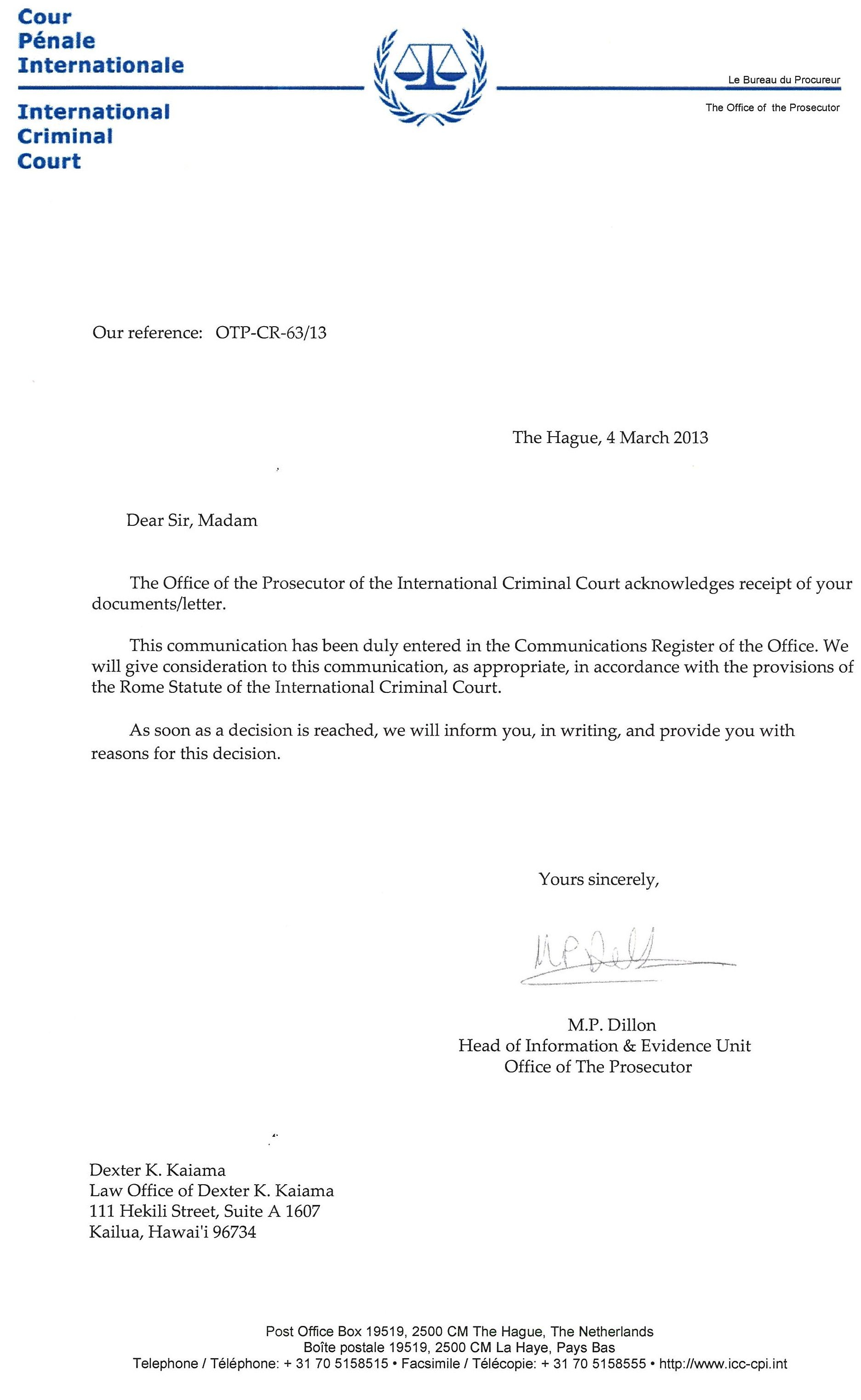 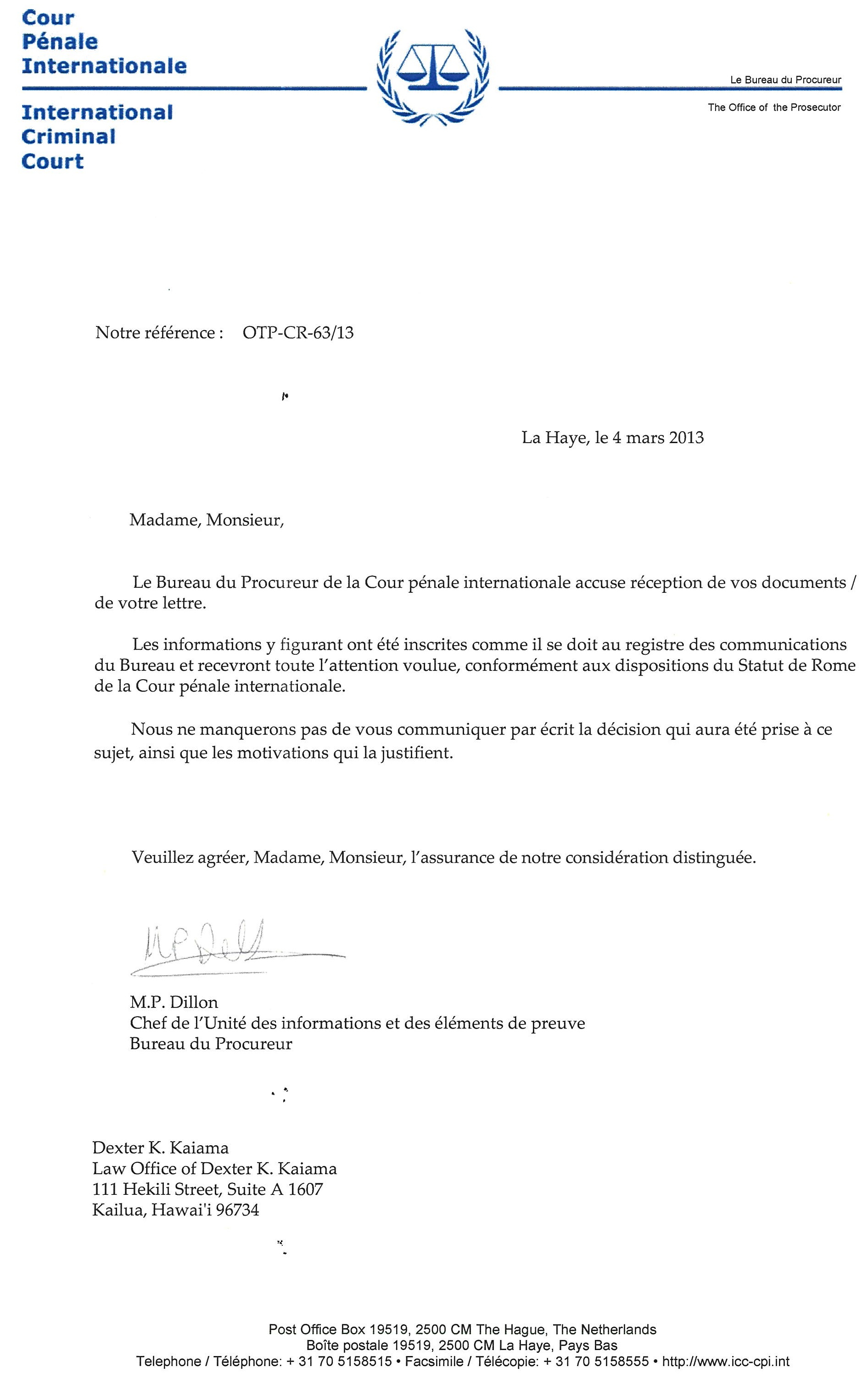 I have no personal knowledge of information that has been disclosed or made available to Court Administrator Lester Oshiro concerning the war crimes investigations of Judges in the Third Circuit.  However, the Tribune Herald report, in which Mr. Oshiro claims he was unaware of these criminal investigations, belie events which occurred on March 4, 2013 when a “High Alert” was issued by the State of Hawai‘i Attorney General’s Investigation Division and additional security was ordered for Judges throughout the Islands.  This was in reaction to the day the ICC would begin jurisdiction, which was March 4, 2013. It is the journalist’s rush to publication, at the expense of in-depth and responsible investigation, that resulted in the printing of misinformation.

Accordingly, the Hawai‘i Police Department’s May 9, 2013 media release, that it is not conducting an investigation, will be forwarded to the ICC.  The ICC’s exercise of jurisdiction over these war crime complaints, as the court of last resort, can be invoked if the responsible law enforcement agency fails or refuses to investigate and prosecute or attempts to shield the perpetrators of the war crime.

The Hawai‘i Police Department’s May 9, 2013 media release provides evidence that exercise of the ICC’s jurisdiction should take place immediately.