In 2010, Hawaiian Civic Clubs from across the Hawaiian Islands and the United States met at its annual convention held at the Keauhou Sheraton Hotel on the Island of Hawai‘i. The first Hawaiian Civic Club was established in 1918 by Prince Kuhio Kalaniana‘ole. The Association of Hawaiian Civic Clubs (AHCC) is a confederacy of fifty-eight clubs that advocates “for improved welfare of native Hawaiians in culture, health, economic development, education, social welfare, and nationhood,” that was established in 1959. According to Dot Uchima, Recording Secretary, the AHCC “has established a reputation of serious consideration on community issues and mana‘o of the membership as it convenes annually at locations where clubs are represented,” and that “many resolutions adopted by the Association’s delegation at convention have served as the basis for proposed state and federal legislation.” 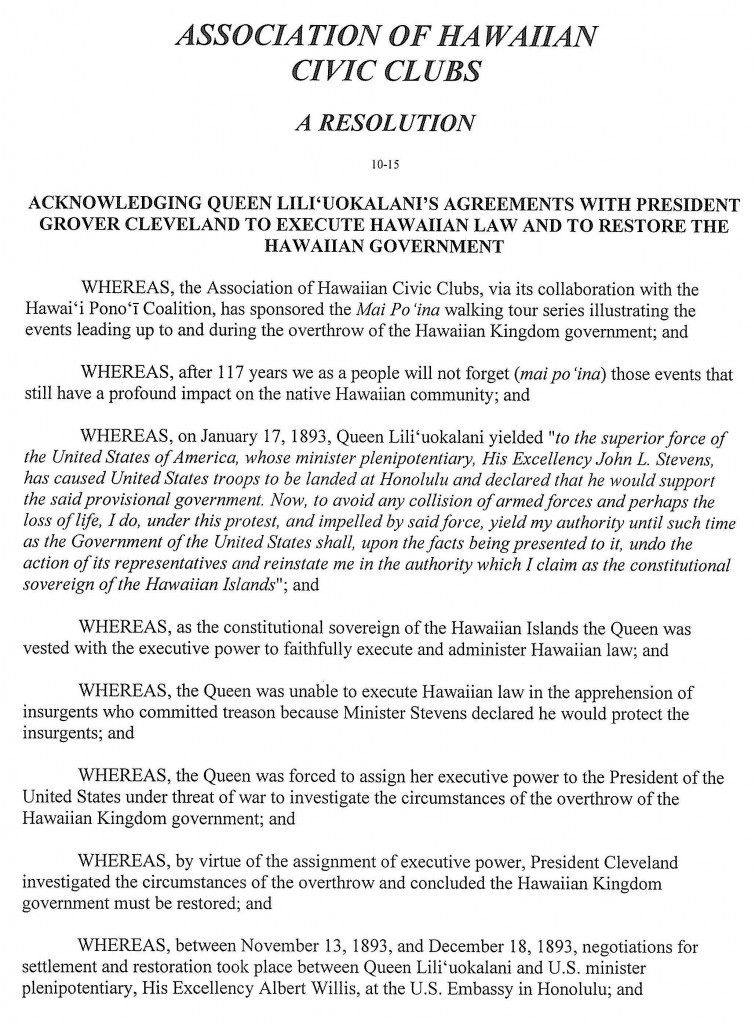 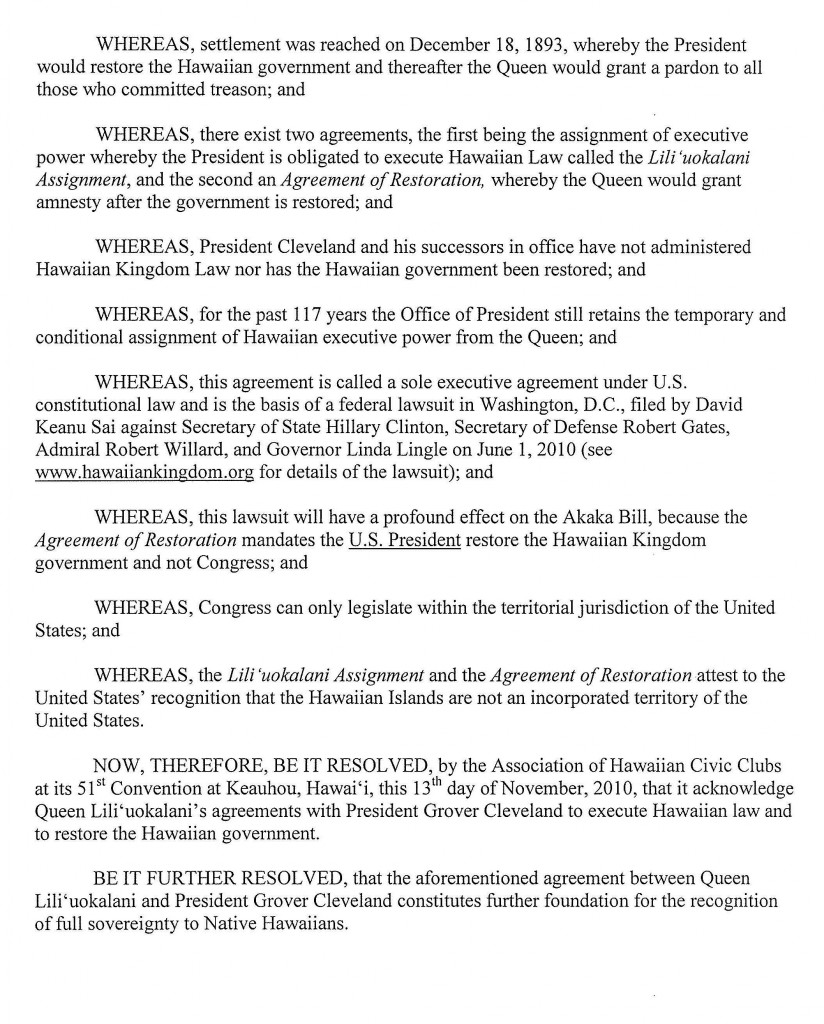 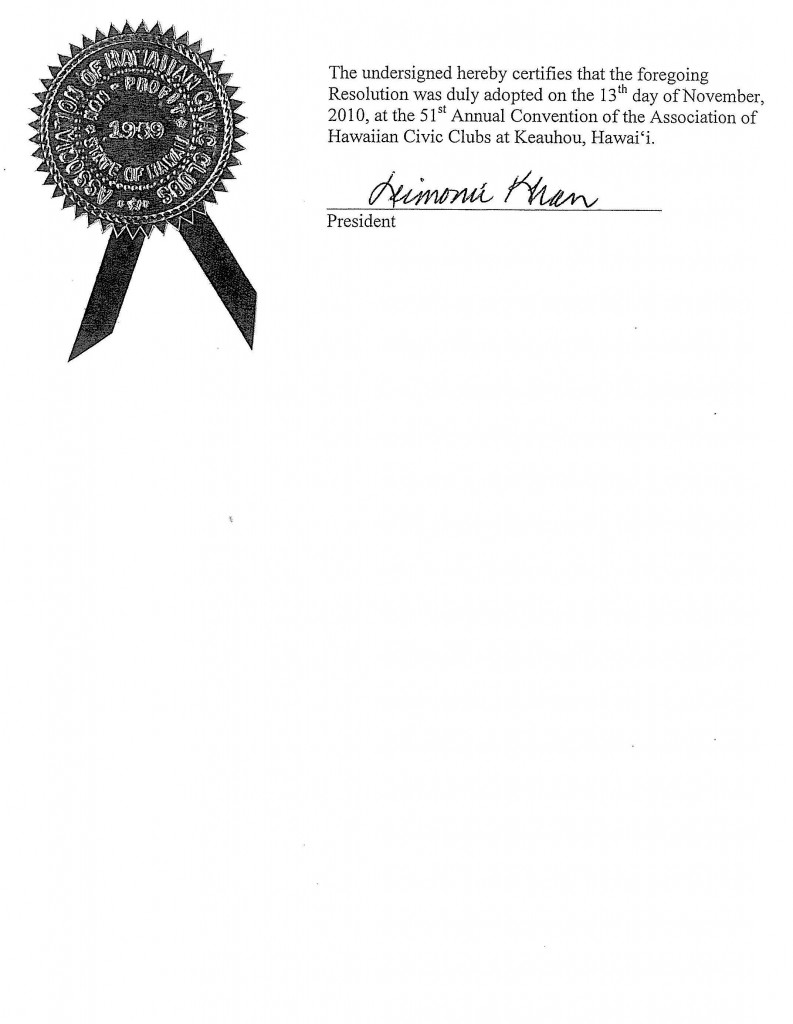 On March 14, 2011, State of Hawai‘i Representative Mele Carroll introduced House Concurrent Resolution (HCR) 107 calling for the establishment of a joint legislative investigating committee to investigate the status of two executive agreements entered into in 1893 between the United States President Grover Cleveland and Queen Lili‘uokalani of the Hawaiian Kingdom, called the Lili‘uokalani Assignment (January 17, 1893) and the Agreement of Restoration (December 18, 1893). The Lili‘uokalani Assignment mandates the President to administer Hawaiian Kingdom law, and the Agreement of Restoration mandates the President to restore the Hawaiian Kingdom government as it was prior to illegal landing of U.S. troops on January 16, 1893, and thereafter the Queen to grant amnesty to certain people who committed treason.

HCR 107 acknowledged the AHCC Resolution 10-15 and called for the establishment of a “joint legislative investigating committee to investigate the status of two executive agreements entered into between President Grover Cleveland of the United States and Queen Lili‘uokalani of the Hawaiian Kingdom in 1893, called the Lili‘uokalani Assignment and the Agreement of Restoration,” and the “purpose and duties of the joint committee shall be to inquire into the status of the executive agreements by holding meetings and hearings as necessary, receiving all information from the inquiry, and submitting a final report to the Legislature.”

In a hearing before the Hawaiian Affairs Committee of the House of Representatives, Soulee Stroud, President of the AHCC, gave testimony in support of HCR 107.

This is very timely because the Association of Hawaiian Civic Clubs has publicly taken an affirmative stance through AHCC Resolution 10-15 that calls upon the President of the United States to restore the Hawaiian Kingdom government as it stood on January 17, 1893 and not a native Hawaiian government contrived under domestic United States law, which stands in direct violation of these executive agreements and international law. The AHCC will be meeting again in its annual convention from October 26 to November 2, 2014 at the Waikoloa Hotel, Island of Hawai‘i.