What people may not know is that Switzerland’s criminal procedures are very different from the United States. Switzerland operates under a “civil law tradition” while the United States operates under a “common law tradition” that came from the English common law because the original thirteen States of the United States were formerly British colonies. In contrast, the civil law has codes and the common law does not. Civil law countries provide legal codes that explain all matters that can be brought before the courts, the applicable procedure of criminal investigations, the punishment for crimes, and trial. Switzerland’s codes are the Swiss Criminal Code (SCC) and the Swiss Criminal Procedure Code (SCPC). Common law countries do not provide comprehensive codes, but rather rely on numerous statutes and precedence set by decisions of judges, which is called stare decisis.

A very good compare and contrast of the two legal systems can be found in Dr. Vivienne O’Connor’s publication “Common Law and Civil Law Traditions.”

According to Dr. O’Connor, “International treaties and conventions also are sources of law in civil law countries. Most civil law countries are ‘monist’ meaning that when the country ratifies a treaty, it automatically becomes part of domestic law. This means that a judge can automatically apply it and a party in court can rely on international law in proceedings. In some countries, the judge can declare a national law or provision to be invalid if it conflicts with an international treaty or convention that the country has ratified.”

The Swiss Criminal Code provides for the Federal Attorney General to conduct criminal investigations for war crimes, but their decisions are subject to review by the “objections authority” of the Swiss Federal Criminal Court if someone is objecting to “the procedural acts and decisions [of an investigating magistrate, prosecutor or police] not subject to appeal (Article 20, SCPC).” This was the role the objection chambers of the Swiss Federal Criminal Court held in the case of Mr. Kale Gumapac and the unnamed Swiss citizen who were alleging that war crimes were committed against them in the Hawaiian Islands. 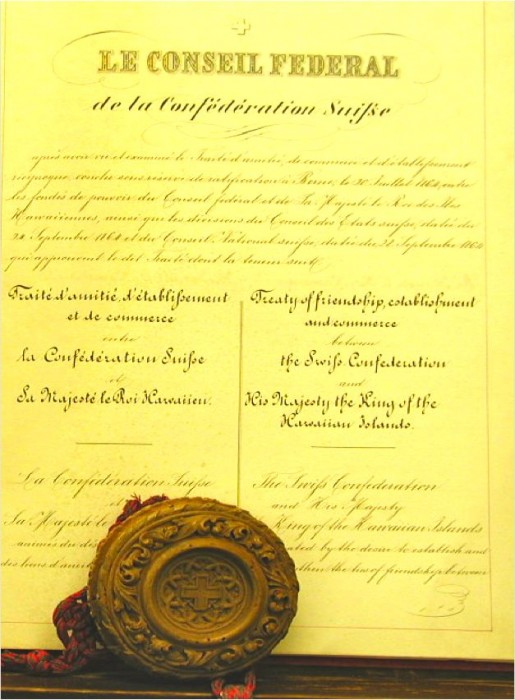 What is the significance of the Swiss Federal Criminal Court’s reciting of Gumapac’s invoking his rights as a Hawaiian subject under the 1864 Hawaiian-Swiss treaty, “which wasn’t cancelled”? At first, it may appear that the Court was merely reciting Gumapac’s position that the treaty wasn’t cancelled, but did Gumapac state or even imply that it was he who was stating that the treaty wasn’t cancelled, or was it the three-judge panel that made that conclusion. The Court in making specific reference to Gumapac’s amended complaint dated January 22, 2015, stated, “that, in addition, by way of a letter dated January 22, 2015, [Dr. Keanu] Sai, in the name of Kale Kepekaio Gumapac…contacted the office of the Federal Attorney General and requested that criminal proceedings against Josef Ackermann…, the former CEO of Deutsche Bank National Trust Company…be opened and in this connection invoked rights deriving from Art. 1 of the friendship treaty between the Swiss Confederation and the then Hawaiian Kingdom of July 20, 1864, which has not been cancelled.”

In order to determine whether it was Gumapac who made this statement or the Court we need to look at what was stated in the amended complaint.

Gumapac, by his attorney-in-fact Dr. Sai, amended the original complaint dated December 7, 2014. The amended complaint states that Gumapac’s “initial complaint was based on universal jurisdiction, but in light of the fact that Josef Ackermann, who served as the Chief Executive Officer for Deutsche Bank when the war crimes were committed against [Gumapac], is a Swiss citizen, Mr. Gumapac is amending his complaint to include active personality jurisdiction and is invoking his rights as a Hawaiian subject under Article 1 of the 1864 Hawaiian-Swiss Treaty, which provides: “Hawaiians shall be received and treated in every canton of the Swiss Confederation, as regards their persons and their properties, on the same footing and in the same manner as now or may hereafter be treated, the citizens of other cantons.”

The amended complaint then follows, “Therefore, according to Articles 118 and 119 of the Swiss Criminal Procedure Code (S-CPC), Mr. Gumapac is expressly declaring that he has suffered grave harm and respectfully demands that your office initiate an immediate investigation into the war crime of pillaging committed by Josef Ackermann being a Swiss citizen residing within the territory of the Swiss Confederation.” Gumapac made no statement that the treaty wasn’t cancelled, but rather was operating on the premise that the treaty remained binding on the Swiss authorities that were obligated to treat Gumapac in the same manner as Swiss citizens are treated in any of the cantons.

Another way a treaty can be cancelled is if one of the countries that is a party to the treaty, ceases to exist as a country under international law. Without the existence of one of the parties there can be no treaty, because a treaty, by definition, is an agreement between two or more States. Therefore, if the Hawaiian Kingdom were annexed by the United States under international law, it would have consequently cancelled the Hawaiian-Swiss Treaty and replaced it with the U.S.-Swiss Treaty. This was specifically stated in the 1898 U.S. Congressional joint resolution of annexation, which read, “The existing treaties of the Hawaiian Islands with foreign nations shall forthwith cease and determine, being replaced by such treaties as may exist, or as may be hereafter concluded, between the United States and such foreign nations.”

A joint resolution of Congress has no force and effect beyond U.S. territory and, as such, cannot have the power to cancel the treaty between Switzerland and the Hawaiian Kingdom. In other words, the only way to annex Hawai‘i and to cancel its treaty with Switzerland was for the United States to have a treaty with Hawai‘i that would have the effect of merging Hawai‘i into the United States. Only then would it have the effect of canceling the treaty with Switzerland. However, there is no treaty, but rather only a unilateral Congressional action.

When the Swiss Federal Criminal Court stated that the Hawaiian-Swiss treaty “wasn’t cancelled,” it was not a conclusion of law, but rather a conclusion of fact that supported Gumapac’s invoking of his rights under Article 1 of the treaty. In his report dated February 3, 2015, the Prosecutor, himself, also made the same conclusion regarding the status of the treaty. The report (German) (English translation) stated, “On January 22, 2015, Kale Kepekaio GUMAPAC confirmed in writing the accusations against Joseph ACKERMANN and in addition pointed out his rights stemming from Art. 1 of the friendship treaty between the SWISS CONFEDERATION and the then HAWAIIAN KING of July 20, 1864, which was never cancelled.”

When the Court received the objection to the decision made by the Prosecutor on April 8, 2015, the President of the Objections Chamber ordered, by letter dated April 9, 2015, that the Prosecutor turn over all records of his investigation. The order stated, “In the matter mentioned above, a complaint against your decision not to engage of February 15, 2015 has been received at the Federal Criminal Court. You are requested to furnish the Federal Criminal Court right away with the records established in the abovementioned matter (including documents of receipt) with an index of the records.” This is a clear example of the civil law tradition where judges are involved in a criminal investigation. In common law countries such as the United States, there is no judicial oversight of a prosecutor’s decision to conduct a criminal investigation.

The three-judge panel of the Federal Criminal Court’s Objection Chambers would not have restated the allegations of war crimes in its April 28, 2015 decision unless the alleged war crimes met the statutory definition of war crimes under Swiss law. If not, it would have been deemed frivolous in this preliminary stage of the investigation and the Swiss Criminal Court would have dispensed with the criminal investigation and make no mention of the allegations. Nowhere in the decision did the three-judge panel state or even imply that the Prosecutor’s decision was going to be upheld.

Even more stunning, the decision specifically named Josef Ackermann, former CEO of Deutsche Bank, and officials of the State of Hawai‘i—Governor Neil Abercrombie, Lieutenant Governor Shan Tsutsui, Director of Taxation Frederik Pablo, and Deputy Director of Taxation Joshua Wisch. Under the civil law tradition, the decision by the Objections Chamber of the Federal Criminal Court is a part of the criminal investigation stage of these proceedings.

For the purposes of Swiss law, a war crime is defined as an international armed conflict, as between two or more States, even when occupation of the other State takes place without any armed resistance. The Hawaiian Kingdom was occupied by the United States on August 12, 1898, when the United States was waging war in the Spanish colonies of the Philippines and Guam. This was very similar and analogous to the German occupation of Luxemburg from 1914-1918 as it was waging war against France during World War I. Both the American occupation of Hawai‘i and the German occupation of Luxemburg took place without armed resistance.

From the decision (German) (translation to English), it appeared that the three-judge panel was prevented from reversing the Prosecutor’s decision because of a technicality, which was failure to submit the objection to the Court within the 10-day period allowed by law. In this case, Swiss law (Article 20, SCPC) allows the objections authority of the Swiss Federal Supreme Court’s Criminal Law Section to accept an objection to a decision made by “courts of the first instance,” which, in this case, is the three-judge panel of the Swiss Federal Criminal Court. Again, here is another example under the civil law tradition of having another level of judges overseeing a criminal investigation.

On May 29, 2015, the Clerk’s office of the objections authority of the Swiss Supreme Court’s Criminal Law Section accepted the objection, and assigned it case number 6B_563/2015. The Clerk’s office stated that the proceedings are against the Federal Criminal Court, Objections Chamber, as well as the Office of the Swiss Federal Attorney General. It further stated, “Possible procedural orders, as far as necessary, will follow.”