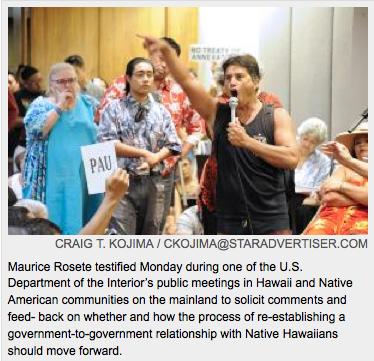 The vast majority of people who testified before a federal panel Monday soundly rejected any attempt by the Obama administration to pursue federal recognition of a future Native Hawaiian governing body.

In often passionate, sometimes heated testimony, dozens of speakers said they opposed any effort by the Department of the Interior to start a rule-making proc­ess that could set the framework for re-establishing a government-to-government relationship with Native Hawaiians.

At the first two of 15 public meetings scheduled over the next two weeks, most of those testifying said the department does not have the authority to re-establish that relationship and implored the agency to halt the proc­ess and not interfere in Hawaiians’ right to political self-determination.

“We don’t need you folks to come in and tell us what to do,” Hawaiian activist Dennis “Bumpy” Kana­hele told the panel Wednesday morning at the state Capitol auditorium.

He expanded on those remarks at an evening meeting in Wai­ma­nalo, where 154 people signed up to speak.

“You gotta realize that a crime has taken place,” Kana­hele said. “And the United States essentially came back to the crime scene. We need to decide how to govern ourselves. We don’t need the federal government.”

At the evening session he was followed by Brandon Maka­‘awa­‘awa of Wai­ma­nalo.

“In the past the Native Hawaiian people have suffered the manipulation of our rights to self-determination on numerous occasions,” he said. “Once again our inherent sovereignty and rights to self-determination are being undermined by these DOI meetings. It is our political right to govern ourselves. The Native Hawaiian people have already begun the proc­ess and should be allowed to finish it without the interference of the U.S. government.”

Many of the speakers said they are not interested in seeing Hawaiians attain a tribal status similar to American Indians, which was what backers of the so-called Akaka Bill in Congress unsuccessfully attempted to do for more than a decade.

They said Hawaii is an illegally occupied sovereign nation and that any government-to-government dealings should be between a kingdom government and the U.S. secretary of state, who deals with foreign nations on behalf of the United States, not the interior secretary.

DeMont R.D. Conner of Nana­kuli used the analogy of a car theft and the federal government’s 1993 apology for the 1893 overthrow of the Hawaiian monarchy to question the department’s current actions: The thief apologizes to the owner but keeps the car.

“Go back and tell your boss, ‘Give ’em back the car!'” Conner told the panel.

More than 140 people signed up to testify at the Monday morning session, which was attended by an overflow crowd of more than 200 people and lasted more than three hours.

“It’s very simple: You don’t have jurisdiction here,” said testifier Remi Abellira, adding, “We don’t need recognition. We know who we are.”

Over the next two months, the department is taking public comments at the Hawaii sessions and at additional meetings in Native American communities on the mainland. It also is soliciting written comments.

The feedback is meant to help the Obama administration determine whether it should propose a federal rule that would facilitate the proc­ess for re-establishing a government-to-government relationship.

It also is soliciting comments to determine what form that proc­ess should take — if the administration decides to pursue that path — and whether the federal government should assist the Native Hawaiian community in reorganizing its government.

“Be clear. This is only a first step,” Rhea Suh, the Interior Department’s assistant secretary for policy, management and budget, told those at the morning session.

Suh was one of six officials from that agency and the Justice Department to sit on the panel.

Sam Hirsch, a Justice Department attorney, told the crowd that the federal government does not have procedures in place to pursue administrative recognition of a Native Hawaiian government.

That’s why the meetings are needed should the Interior Department decide to pursue that path, Hirsch said.

But he emphasized that the sessions will not address what structure the yet-to-be-formed Hawaiian government should take.

“That’s a matter for the community” to decide, Hirsch said.

To the main questions asked by the panel, University of Hawaii law professor Williamson Chang offered these comments: “I want to say no, no, no. No to federal recognition, no to occupation, no to the United States.”

Walter Ritte of Molo­kai testified that the department’s timing couldn’t be worse, particularly as Hawaiians are engaged in a controversial nation-building effort.

Of the several dozen who testified at the morning session, only a few supported the department’s plan.

Office of Hawaiian Affairs Chairwoman Collette Machado was among those, and her time at the microphone eventually turned into a shouting match with members of the audience.

Davianna Pomaikai McGregor, a UH ethnic studies professor, also offered supporting testimony, saying the proc­ess should not interfere with the re-establishment of the kingdom government.

“We should be supporting both efforts,” McGregor told the Hono­lulu Star-Advertiser after she testified.

Other than occasional jeers from the audience and a few profanity-laced comments, most of the morning session was civil. Some participants came decked in traditional garb or carrying signs, such as “What Tribe Has a Palace.”

Several expressed frustration that the federal government has solicited similar feedback about recognition over the years, yet nothing came of it.