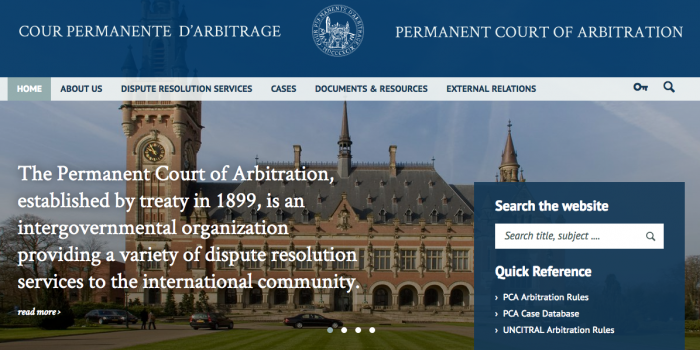 On January 19, 2017, the Hawaiian Kingdom Government and Lance Paul Larsen entered into a Special Agreement to form a Fact-finding Commission of Inquiry under the auspices of the Permanent Court of Arbitration (PCA), The Hague, Netherlands. The International Bureau of the PCA was notified by joint letter, from the Hawaiian Government and Mr. Larsen, on January 24, 2017 to initiate the proceedings.

This move toward fact-finding is in direct response to the recommendation of the Tribunal in paragraphs 13.1-13.3 of the Award (2001) in Larsen v. Hawaiian Kingdom, 119 Int’l L. Rep. 566, 597 (2001). The Tribunal stated, “In addition to its role as a facilitator of international arbitration and conciliation, the Permanent Court of Arbitration has various procedures for fact-finding, both as between States and otherwise.” The Tribunal further stated it could “reconstitute itself as a fact-finding commission, [but a] new compromis or agreement would…have been required.”

After the issuance of the Award, the parties did request for the Tribunal to be reconstituted as a Fact-finding Commission of Inquiry but due to the projected costs at the time it was later withdrawn. During the arbitration, the parties had to contend with the prospect of who would bear the burden of the costs for fact-finding since Mr. Larsen, as claimant in the arbitration, bore the costs, which amounted in excess of $150,000.00. This move, however, did not preclude the parties from entering into an agreement at a later date. Under Article VI of the Special Agreement (January 19, 2017) it was agreed that the Hawaiian Kingdom would bear the burden of costs for the fact-finding.

Prior to facilitating the establishment of the Tribunal in Larsen v. Hawaiian Kingdom, the PCA had to assure that it possessed institutional jurisdiction, which requires one of the parties to be a State. From the record of the arbitral proceedings there are two instances where the PCA acknowledged the Hawaiian Kingdom as a State for administrative purposes. The first instance is in the PCA Case Repository containing Larsen v. Hawaiian Kingdom, wherein the Respondent—Hawaiian Kingdom is identified as a “State” and the Claimant—Lance Paul Larsen as a “Private entity.” The second instance is in Annex 2—Cases conducted under the auspices of the PCA or with the cooperation of the International Bureau, PCA Annual Report 2011. In the PCA’s 2011 Annual Report, the Larsen v. Hawaiian Kingdom arbitration was listed as the thirty-third case that came under the auspices of the PCA pursuant to “article 47 of the 1907 Convention.” Article 47 provides, “The jurisdiction of the Permanent Court may, within the conditions laid down in the regulations, be extended to…non-Contracting Powers.”

The formation of the Fact-finding Commission of Inquiry is not a new proceeding for the PCA to determine its institutional jurisdiction, but rather, a continuation of the proceedings already held under the jurisdiction of the PCA that moves from a dispute under arbitration to a situation under fact-finding.