A march in celebration of Lā Kūʻokoʻa, Hawaiian Independence Day

Hawaiians and supporters across the islands will march on Lā Kūʻokoʻa (Hawaiian Independence Day) on Friday November 28, 2014 in an effort to enhance awareness in our communities and throughout the world about one of the longest standing National Holidays of the Kingdom of Hawaiʻi. Marchers will gather at the Old Kona Airport across from Makala Blvd at 7:30am for opening thoughts and pule. The march will begin at 8:00am and will cover approximately eight miles starting from the Old Airport in the ahupuaʻa of Keahuolū and ending in the ahupuaʻa of Keauhou at the birth site of Kauikeaouli (Kamehameha III).

In Hawaiian, naue means to march. It also means to move, to shake, to tremble, to vibrate and to quake, as the earth. Aloha ʻāina means love of oneʻs land or of oneʻs country. It means patriot, a patriot who illustrates a deep love for the land. On this day of national independence, we hope that our lāhui will naue. That is, this march is meant to illustrate a true and deep love that will shake, vibrate, tremble and move our land and people towards our true patriotism.

“This is a march of aloha. This is a march of love for our land and love for our country. We march together as one with the hope that our claim to national independence may be seen and heard by our local communities and throughout the world. Aloha ʻ āina is alive and it will never die,” says Hawaiian medium preschool teacher and march organizer, Kahoʻokahi Kanuha.

On July 8, 1842 King Kauikeaouli dispatched three delegates to America and Europe to ultimately secure recognition of Hawaiian independence by the major powers of the world. The Hawaiian Delegation, led by Timoteo Haʻalilio, was assured independence by the heads of state of the United States, Great Britain and France and on November 28, 1843 the Kingdom of Hawaiʻi was officially recognized as an independent country by Queen Victoria of the United Kingdom of Great Britain and Ireland along with King Louis-Philippe of France through the signing of the Anglo-Franco proclamation at the Court of London, thereby making Hawaiʻi the first non-European nation in the world to be recognized as an independent country. Lā Kūʻokoʻa was celebrated throughout the Kingdom of Hawaiʻi from 1843 until 1893, when Queen Liliʻuokalani was illegally overthrown on January 17th with the assistance of the US Minister to Hawaiʻi, John L. Stevens.

Building off of the momentum of the Department of Interior hearings held across the archipelago this summer, unity marches will also be held on the islands of Maui, Molokaʻi and Oʻahu to raise awareness in communities about Hawaiian history, our national heritage and of the ever-growing support for a free and independent Hawaiʻi. 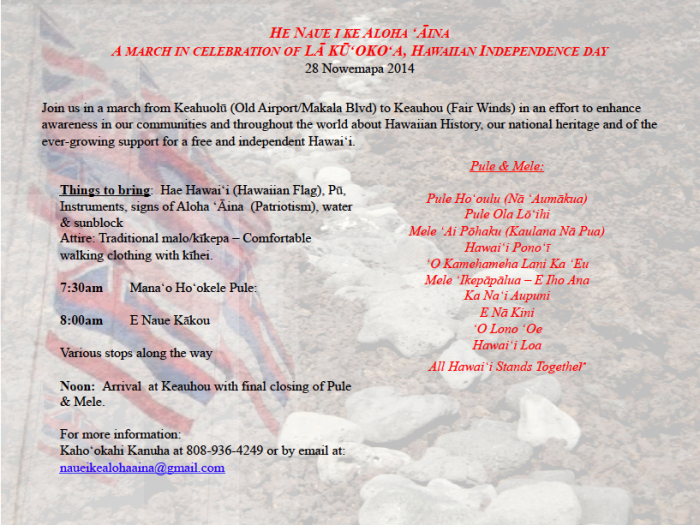 2 thoughts on “A March in Celebration of Lā Kūʻokoʻa, Hawaiian Independence Day”